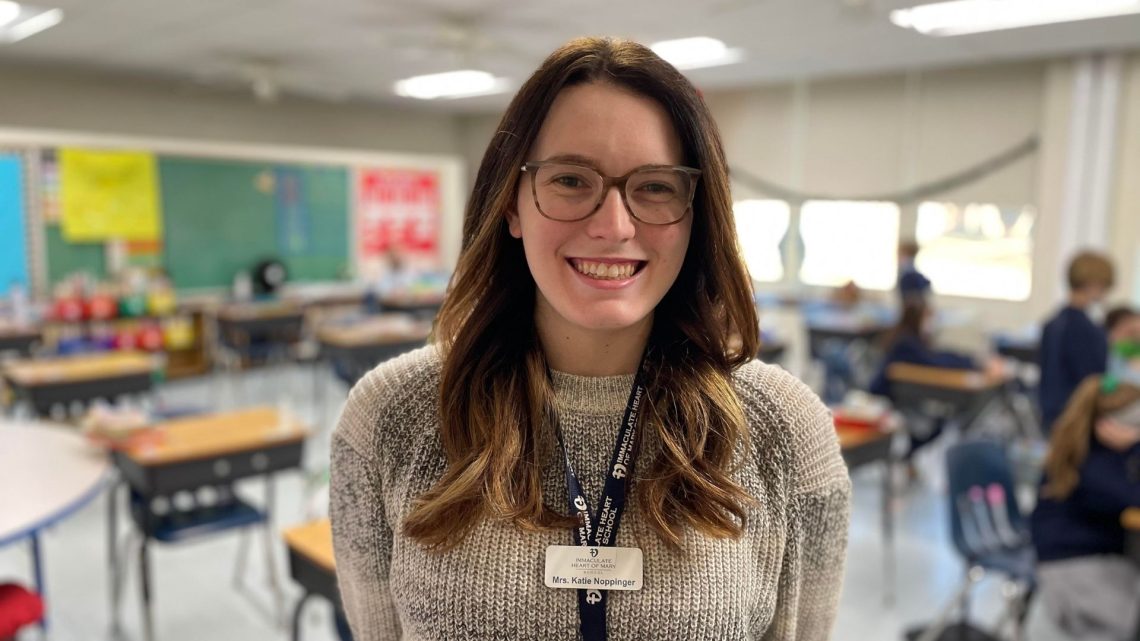 After taking a year off due to COVID, students at Immaculate Heart of Mary School (IHM) are ready to get back on stage – thanks to the leadership of fourth grade teacher Katie Noppinger. For Noppinger, bringing the school’s spring musical to life is a real homecoming. As a former IHM student, she’s thrilled to be back leading the theatre arts program as it’s new director.

“It’s just such a blessing to be back,” said Noppinger. “IHM has an amazing arts program. The entire community is so supportive of students. We provide so many outlets for them to try something new and be creative, and maybe that’s something that they haven’t thought to try before. We offer everything from theatre to music to the National Junior Arts Honor Society.”

Breaking out of a comfort zone and trying something new just happens to be the theme for this year’s spring musical: Disney’s Descendants: The Musical.

“I picked this musical because the theme really spoke with me, especially for middle school students,” said Noppinger. “It’s about being ok to be different. Middle school can be a hard time and this show is about finding out who you are.”

Thirty 6th through 8th grade students are performing as part of the cast in the show and Noppinger hopes to involve many more in the show’s crew.

With over 20 years of dance experience, Noppinger has choreographed several local theatre productions; but this spring’s musical production at IHM will be her directorial debut! The excitement is palpable among IHM students; Noppinger says that there is an energizing buzz among the students that’s making the process of bringing the show to life especially exciting for her.

The elation brings Noppinger back to her days as an IHM student performing on stage. While a middle school student at Immaculate Heart of Mary School, Noppinger performed in Godspell, The Wizard of Oz, and Willy Wonka. She hopes that this year’s cast makes the same wonderful – – and to borrow a line from Disney – magical memories that she made as a student.

“There are quite a few students in the production who have never stepped on stage before,” said Noppinger. “I hope they make a lot of memories and amazing friendships, because there is just nothing like the bonds and friendships that you make during a show. I hope that they learn to be brave and discover something new about themselves.”

As of now, the school is planning to have a live audience, with COVID precautions in place. Community members can see the show on April 2 at 7:00 pm and April 3 at 3:00pm.

For more information about IHM’s production of Disney’s Descendants: The Musical and their other arts programs, visit: https://ihmschoolmd.org/arts-and-music/.

Editor’s Note: This article is sponsored by Immaculate Heart of Mary School. To learn more about the school, visit their listing in our independent school directory. Images were provided by the school.