We’ve all missed live theatre and Imagination Stage is looking forward to safely welcoming back kids to their Bethesda theatre during the 2021-2022 season!

Not familiar with Imagination Stage? Their mission is to empower young people to discover their voice and identity through performing arts education and professional theatre. Unlike some of Baltimore’s amazing theatres that have fantastic programming for youth and adults, Imagination Stage focuses solely on theatre experiences for children. Their mainstage theatre seats 364 and the entire space is designed for kids — including the child-friendly cafe area outside the theatre space. It’s definitely worth the drive.

You can purchase tickets, purchase a ticket package (they’ve grouped shows in each package by age), or buy a flex pass which offers 7 tickets to any show in any combination. The theatre has detailed their COVID safety precautions here.

We all need a friend, and Lisa is instantly drawn to the perfectly imperfect teddy bear on display at the department store. If only she can convince her stressed-out mother to buy Corduroy for her! Meanwhile, Corduroy is determined to find his missing button and become worthy of going to a real home. After the store has closed, he goes on a hilariously destructive search–with the Night Watchman in comical pursuit. Full of mischief and clowning, this story of unconditional love captures both the humanity and the merriment of the holiday season.

A beautiful, movement-based show that revisits the classic film The Red Balloon. Nothing can go right for the character of the old man, whose days are gray and dreary–until he is visited by a friendly red balloon. In the playful physical style of Charlie Chaplin and Buster Keaton, the old man–an adult version of the boy in the film–regains his youthful spirit, with the help of the red balloon! Produced by special arrangement with Plays for New Audiences

G.Petto is an ingenious computer games designer who one day discovers that his newest game character, P.Nokio, can live outside the computer! G.Petto is thrilled at the prospect of having a “son,” and with the help of the Graffiti Fairy, he teaches P.Nokio how to become a real boy. But, P.Nokio falls in with con artists and finds himself in a web of lies that endangers his father. To save G.Petto, P.Nokio must wise up, keep it real, and learn that words and truth are the mightiest weapons of all. A completely contemporary, high-energy musical update of Pinocchio by the creator of Imagination Stage’s hit Zomo the Rabbit: A Hip-Hop Creation Myth.

A brand new, music-filled piece by the creators of Wake Up, Brother Bear and Mouse on the Move! Mother Goose leads the audience through some of her most beloved nursery rhymes, using puppets and props to bring to life Humpty Dumpty, Old King Cole, the Eensy Weensy Spider, and more. The magical Mother Goose invites your little ones to join in with each rhyme’s story – teaching them that the very best way to do what needs to be done is to do it together.

Mr. Popper, a painter of modest means, dreams of taking an Antarctic adventure. So he’s thrilled when a penguin named Captain Cook waddles out of a mysterious box left on his doorstep. The zookeeper donates a female companion and soon…the patter of 20 baby penguin feet! To feed all of these mouths, the imaginative Mr. Popper and his wife turn his talented penguins into a must-see traveling vaudeville act full of song and dance. But the rigors of performing take a toll on them all, and they must make a difficult decision. This musical play, featuring expert puppetry, depicts a wild and witty way to follow your dreams–and your convictions. 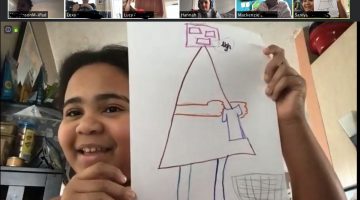