Maryland Zoo Turtle On the Move Thanks to LEGO® Wheelchair 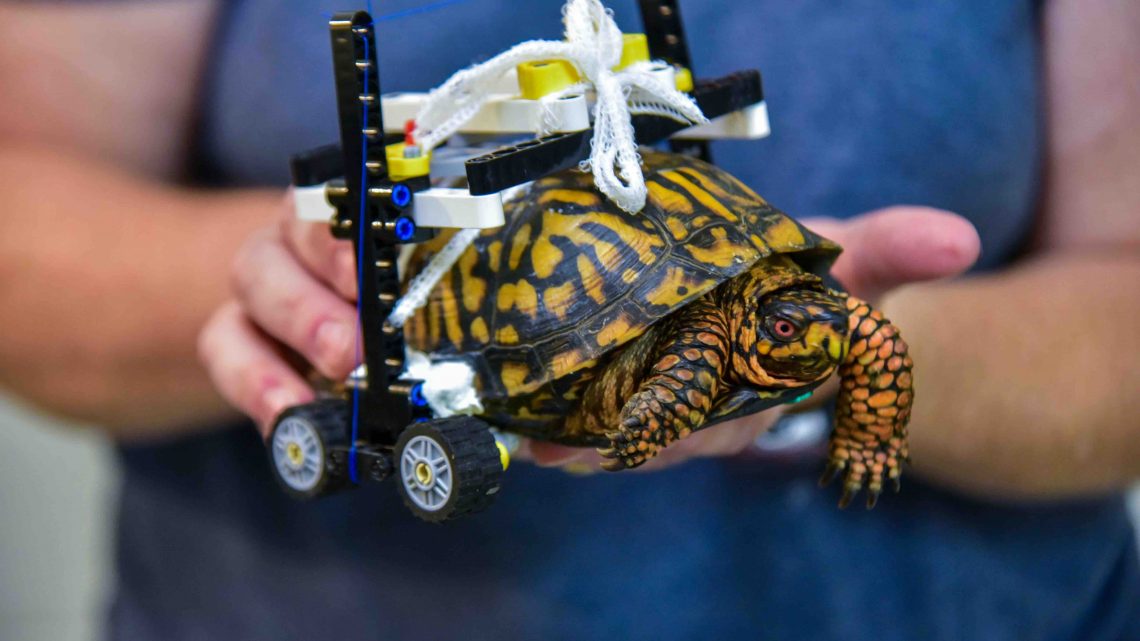 Have a kiddo that loves tinkering with LEGO® toys? Then they’ll love this news from The Maryland Zoo!

A wild Eastern box turtle at The Maryland Zoo is on the mend and on the move thanks to some clever LEGO® engineering. When the turtle needed a wheelchair, the team created one from LEGO® bricks.

“In July, an injured turtle was found in Druid Hill Park by a Zoo employee, and was brought to the Zoo’s hospital for treatment,” said Dr. Ellen Bronson, senior director of animal health, conservation, and research at the Zoo. “He had multiple fractures on his plastron, the bottom part of his shell.  Because of the unique placement of the fractures, we faced a difficult challenge with maintaining the turtle’s mobility while allowing him to heal properly.” 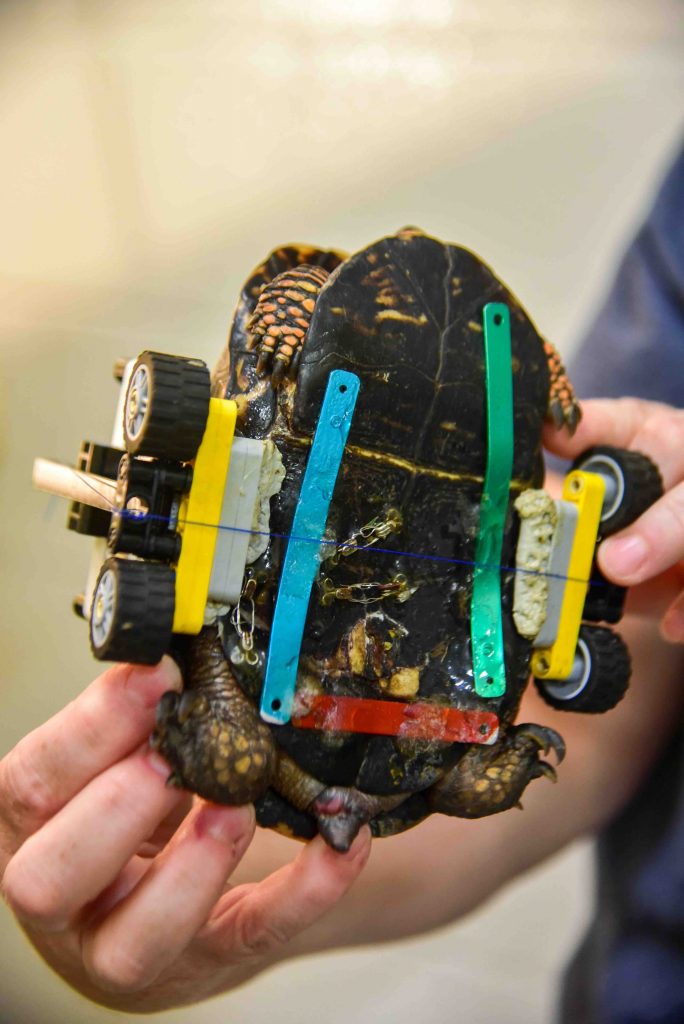 The sketches proved to be a success and the turtle received his very own multi-colored LEGO® brick wheelchair just a few weeks after surgery. The turtle is roughly the size of a grapefruit. The small LEGO® frame surrounds his shell and sits on four LEGO® wheels. Plumbers putty attaches the device to the edges of the turtle’s upper shell, which gets him off of the ground and allows his legs to be freed up so he can move.” 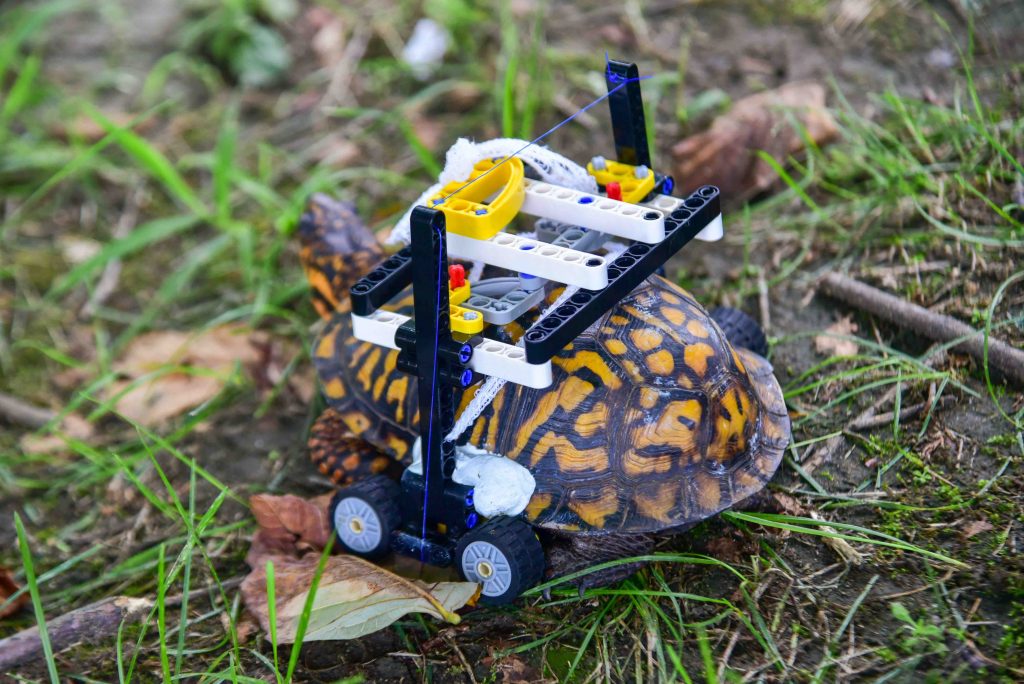 “He never even hesitated,” said Fraess. “He took off and has been doing great. Turtles are really good at healing as long as the shell remains stable.”

With the strength of his front legs, the turtle uses his unique transportation to move around inside and outside. The design allows him to exhibit natural behaviors, such as fully closing his shell if he feels threatened.

“Turtles heal much slower than mammals and birds, since their metabolism is slower So, this turtle will likely use his LEGO® wheelchair through the winter and into the spring until all of the fragments have fused together and the shell has completely healed,” said Dr. Bronson. 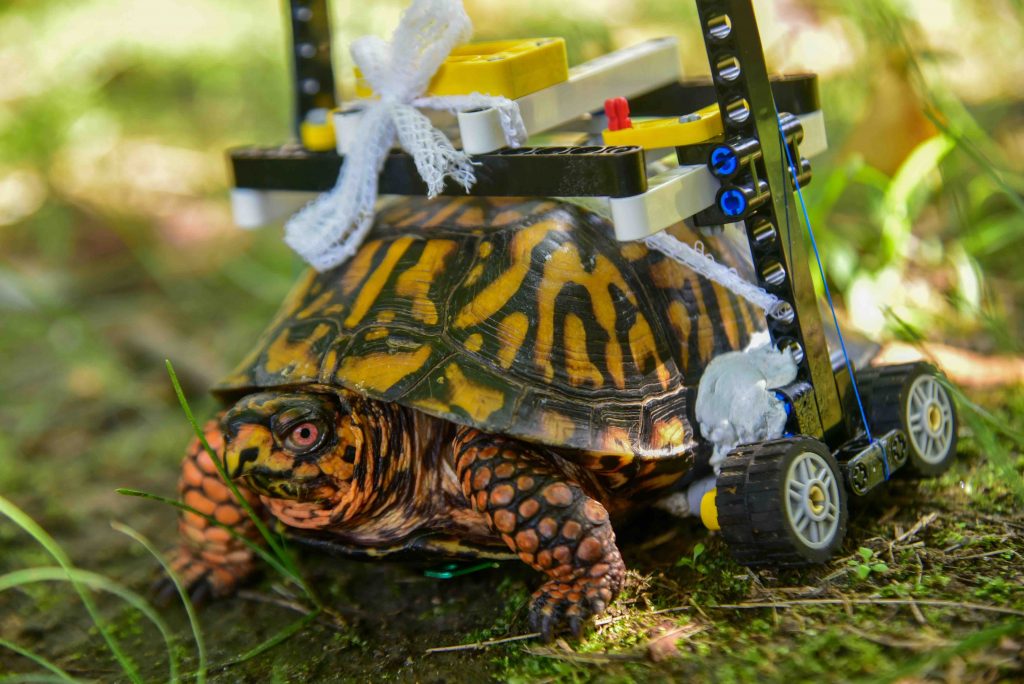 Since 1996, the Zoo has led a Druid Hill Park Eastern box turtle monitoring project. To date, 132 wild turtles have been recorded, tagged and released. The project helps the conservation staff to get a better idea how a native Maryland species is thriving in an urban park setting, and sheds light on turtle territory ranges and behaviors in this rapidly declining species. “This particular turtle was originally tagged in 2000, making him at least 18-years-old,” continued Bronson. “We are very happy that he is recovering well from his injuries and we plan to return him to the wild once he is fully healed.”

Eastern box turtles can be seen in the Zoo’s Maryland Wilderness area.

Next post The Power of Play at GreenMount School

Where to Play! Greater Baltimore Family Events This Weekend, March 15-17

Proud mom moment... loved watching this one and th 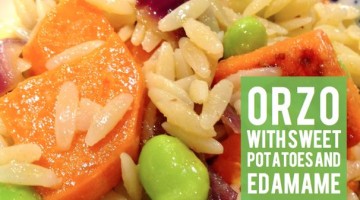