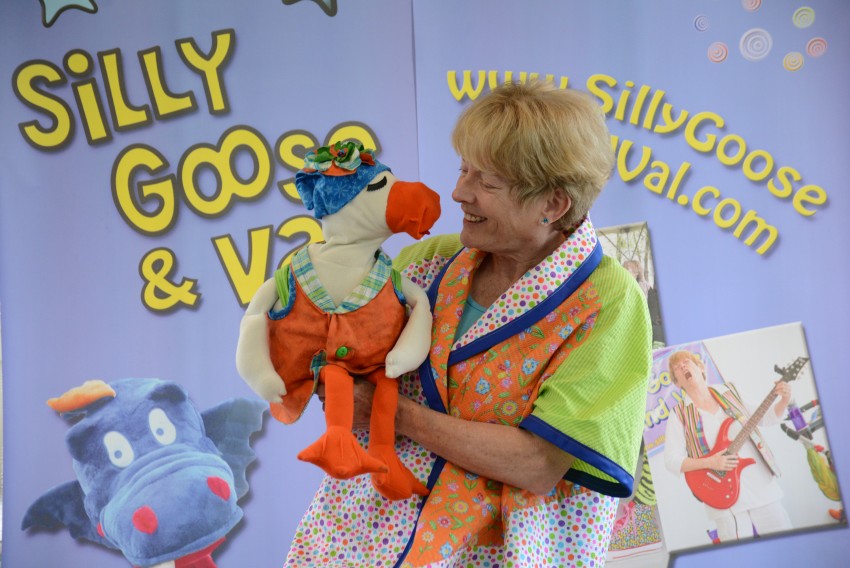 Val Smalkin, the creator of Silly Goose and Val, takes the stage at St. James Academy’s Children’s Dinner Theatre on February 9th! (Seriously, it’s the best family date night deal in town. Dinner & a show for not more than $48 a family!)

We caught up with Val to ask her about the show, what kids will be humming as they leave, and how her career path evolved from philosopher to lawyer to children’s entertainer (yes, you read that right). She is also inviting kids who love to sing to be in a music video with her before the show — and we’ve got the 411 on that!

Chatting with Val Smalkin, Creator of Silly Goose and Val

You have a long history with the Children’s Dinner Theatre at St. James. What makes this series so special? What does it mean to you?

In the ‘90s, when Pam Minor and I were Val and Pam KinderSingers — and co-producers of and performers on It’s Kindertime ( on ABC-TV’s WMAR Baltimore) — we were also regulars in the St. James Church Choir. We wanted to do something help the church and school populations get to know each other better, so we started the St. James Academy Dinner Theatre Concerts as a joint church/school project. The proceeds at that time were split between the church and the school. Pam and I always did the first concert free to build up enough money to pay the following performers.

When I stopped performing for a while in the ‘00s, the Dinner Concerts went into hiatus but were brought back again in about 2010 or so. When I retired from St. James, Pam Minor kindly took over helping with bookings for this series. At the beginning proceeds often went to The Ark, a pre-school for homeless children, run by Episcopal Community Services of MD. Later the proceeds were used to augment the arts at St. James Academy.

Music, dance, puppetry, and laughter always bring people together, and so the SJA Dinner Theatre Concerts have always been my way of creating community moments of musical joy.

Let’s talk a bit about your experiences in the children’s entertainment world. What draws you to perform for kids?

That’s a funny story, that I’ve told often so, if you know me well, skip this paragraph. In 1971 I graduated from Goucher College with a BA in Philosophy (cum laude I’m proud to say). There being few jobs for philosophers and coming from a family of musicians I decided to continue my education at Berklee College of Music in Boston, MA (not Berkeley in Oakland, California) majoring in voice, flute, and piano. That’s where all rock and jazz musicians go to train. One night, as I accompanied one of my teachers to his gig at a strip club in Boston’s Combat Zone, it became crystal clear that this was not the life for me. I did not enjoy bars, drinking, smoking, or late hours. So, I did the next most logical thing for a philosopher, I went to law school.

I loved practicing law, but married, had children, and THEN found children’s music! Everything I love about music without bars, drinking, cigarettes AND best of all with children, who like me, work best at 9 or 10 AM! I started memorizing Raffi’s songs and thought, “I could write songs for kids.” So, I did.

You make all of your own puppets. What does that process look like?

Messy, with many burnt and pierced fingertips. It’s a wonderful process to get an idea for a character, sketch him or her out, and then build. There is no one way to make any puppet, and truthfully no puppet turns out the way you expected. You have to work with what happens in the building process. Anyone interested in puppet making should join the Puppet Maker’s Workshop on Facebook. The world’s most famous puppeteers share everything they know right there!

Silly Goose. How did he come into existence?

You know I’m not sure if Silly Goose is a girl or a boy. I always saw her as a girl, but others (including the entire It’s Kindertime crew) saw her as a boy. So, today I let the viewer decide as they wish. But whatever she is, she’s a tad naughty. And, her birth was serendipitous. Perusing craft patterns and I found one for a goose that lent itself easily to a soft, sock mouth and that was that. I built my first Silly Goose, and being a lifetime fan of Sheri Lewis and Lambchop I was committed to the flexible mouth.

I started doing ventriloquism…well that’s another story, a long story for another time.

What can audiences expect at your performance on February 9th?

I’m very excited that a new puppet, Magdalena, has requested to come, because, she says, she has a special song to sing to one of the gentlemen on the SJA faculty. I’m quite curious about that. Also, Magdalena’s friend, Lola, wants to make her SJA debut.

Oh, and I’m in the process of collecting a group of student-volunteers from the academy to join me on stage singing Let the World Be Well for a Children’s Music Network video. CMN (a 501(c)(3) charity) is a nationwide association of teachers, musicians, librarians, parents and children who celebrate the positive power of music in children’s lives. I’m currently the co-president of this amazing group and anyone interested in kids and music should join! But back to the video plan: hopefully, I will meet with any interested children at 4:30 PM at St. James on the day of the concert to teach the song. Parents, of course, will have to sign a release in order for their child to participate. Then, during the concert, the children who rehearsed (and whose parents signed a release) will be invited on stage to sing and be recorded! Cool, eh? Contact me if you are interested: Val@sillygosoeandval.com.

As always, there will be silliness, laughter, dancing, sing-along, and play-along fun. I’ll include Love Bug! that was nominated for Best Children’s Song by the International RoundGlass Music Awards. I’m in competition with Alvin and the Chipmunks, and Mr. G. who won the Latin Grammy award for Best Children’s Album. That’s company that makes me happy!

And of course, as it is a Valentine’s Day Song, there will be songs about love, but who knows what Silly Goose might do with some of them. I certainly don’t!

What tune will kids most likely be humming as they leave the show? (… and why that one?)

I would love them to leave humming the Magic Penny by Malvina Reynolds (she also wrote the theme song Little Boxes, if you recall the TV show Weeds). Her daughter, and a friend of mine, Nancy Schimmel wrote a verse just for Valentine’s day. Here’s the quite hummable chorus:

That about says it all, doesn’t it!? 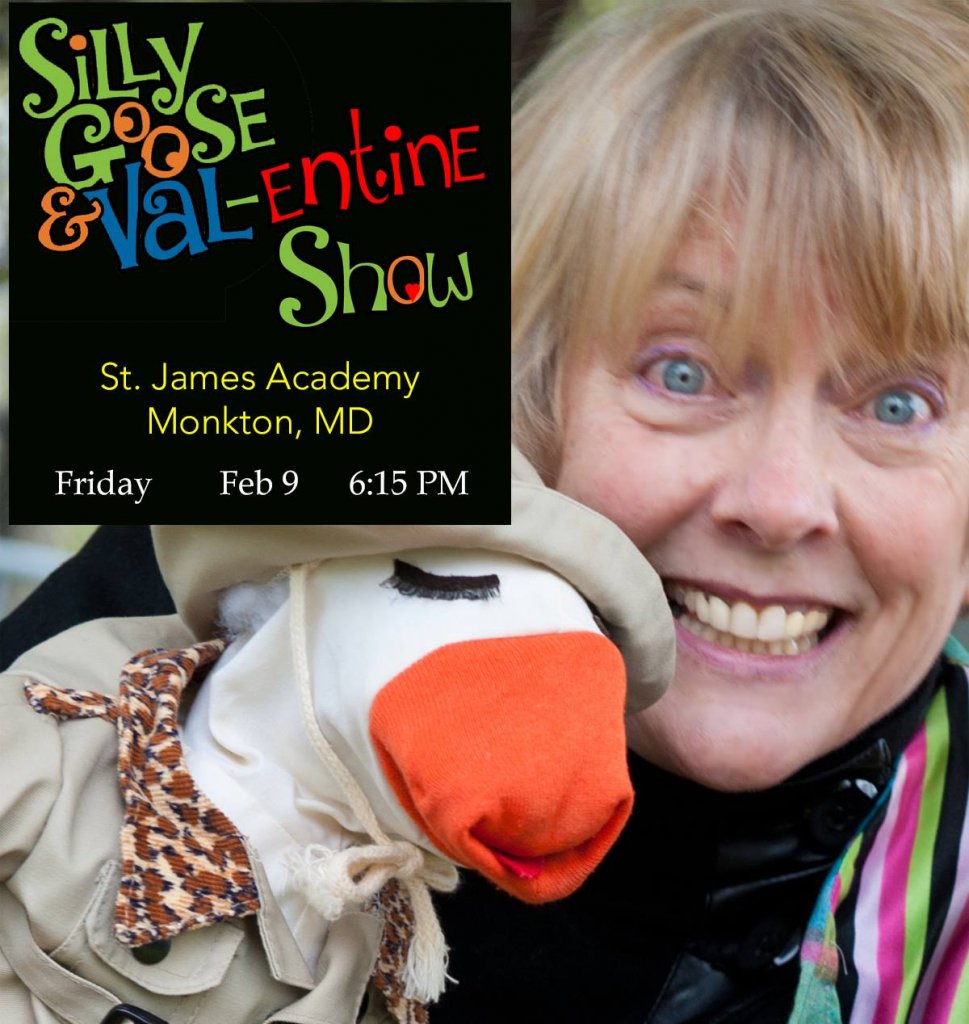 Looking for a family night out that’s affordable, delicious, and entertaining? St. James Academy’s Children’s Dinner Theatre series aims to provide quality local entertainment for children and parents. A casual dinner is served in Macdonald Hall at 5:30 PM followed by the evening’s performance at 6:15 PM in the Susan Tucker Moore Theatre. Dinner is $6 per person and the show is $6 per guest. Children under 2 are free and $48 max cost per family. (cool) progeny is a proud media partner of this series. MORE

Next post Where to Play: Baltimore Family Events This Weekend, January 26-28 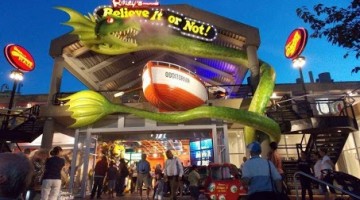 right here in baltimore, believe it or not!