Kevin Sherry doesn’t walk into a room – he bounds into it, talking fast and smiling, an endless well of energy and enthusiasm.

After a few minutes with him, you begin to understand how he’s become a successful children’s book author and illustrator: persistence, talent and a little bit of luck.

At 35 years old, he has already published about 10 children’s books through Dial Books (an imprint of Penguin Books) and Scholastic Press, including “I’m the Biggest Thing in the Ocean,” the “Yeti Files” trilogy and his latest, “Remy Sneakers.” He drew a comic for the now-defunct Baltimore City Paper, and also designs the “music monsters” poster series for WTMD’s Saturday Morning Tunes concerts.

How did you get into children’s books?

Basically, my T-shirts did really well at small press expos. So I would do all those indie craft markets in every city. I had five or six zines that I made in college of indie comic book stuff. (Note: Zines are DIY magazines, often hand-drawn and self-published in black and white.)

When I would do small press expos, I would set my zines out. When I was doing the Museum of Comic and Cartoon Art Small Press Expo in New York City, this woman came by and she bought all of my zines. I didn’t think anything of it, but she emailed me that Monday and said ‘Do you want to write a children’s book?’ I was like, ‘Oh my gosh!’ So yes, I was discovered at a small press expo from photocopied zines.

Yeah, it took a lot longer after that. What I thought a children’s book is, is not really what it is. It’s a product, a certain formula.

Well, you’ve had some success with “I’m the Biggest Thing in the Ocean.”

So I pitched to these women [at Penguin Books] three times, and each time I was off the mark. In the office, they would say, ‘Oh yes, yes, yes we love it, we love it, we’ll call you Monday.’ And they would not call me back. They called on numbers I couldn’t call them back on, they wouldn’t return my emails, they wouldn’t give me any feedback. Until I said, ‘I have new pitches.’ And then they would immediately get back and say ‘Come on back up.’ So I did that three times and they would do the same thing every time and I just wasn’t getting it.

I figured out I was pitching to a specific imprint of Penguin, Dial Books for Young Readers, so I went to Barnes and Noble, and without looking at the titles, I just looked at the spines and took all the Dial books out and made a big pile. And then I read each one, and on the bike ride home from Barnes and Noble, I came up with ‘I’m the Biggest Thing in the Ocean.’ And I mocked it up and sent I to them, and they were like, ‘We’ll call you on Monday.’ And they did call on Monday.

You’re in schools, performing for children a lot. What’s that like?

I love performing for students because I love getting their attention. Even the squirmy ones. I want to show them appreciation for what creative arts can be. I want to shock them into thinking about things differently.

When I go to schools, I wear [fake] heads, I do some fun songs, and I go into my slideshow of things I loved when I was a kid, like zoo books, Ninja Turtles and even Garfield.

When you’re performing for kids, do you ever see yourself in them?

There were assemblies in my elementary school, too. I went to Birches Elementary School. And I don’t know why but I do remember this musician who brought a synthesizer on stage. And he was like, ‘I’m going to create a song for you guys (singing) ‘Birches Elementary School-oo-ool. Ooo-ooo.’’ Really ’80s. He did that with the synthesizer and I must have been in second or third grade and I will never be able to get that out of my head. For my entire life. So yeah, these things stick.

Maybe one of these kids sees a dancing raccoon that I bring or this weird huge yeti head I’m wearing and it might stick in their head. And if it gives them a certain empathy or appreciation for the creative arts at a children’s base level, I think that’s a good place to start.

Learn more about Kevin and his work by visiting his website.

Next post Where to Play: Baltimore Family Events This Weekend, November 24-26 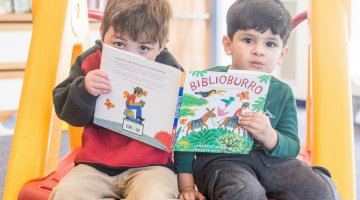