What Does Integral Learning Look Like at Cambridge School?

Kids Choose the Mac and Cheese at Miss Shirley’s Café!

Or maybe not so standard?

Our friends at Miss Shirley’s Café are amping up their mac and cheese game and asked for our help. So guess what? (cool) progeny readers are going to help pick what mac and cheese recipe hits their kids’ menu this fall. All you have to do is vote for your favorite online. Everyone who votes get a chance to win a $50 gift card to Miss Shirley’s. You can vote once every 24 hours, now through September 20th.

Never been to Miss Shirley’s? You need to get there, stat! Homey, warm and always bustling, the award winning breakfast, brunch and lunch spot has been a local favorite for over a decade. The restaurant, which is known for its creative, southern-inspired comfort food with a Maryland twist, started with one small location in Roland Park. After outgrowing the original space, Miss Shirley’s moved to a larger Roland Park location and opened two more restaurants – one in the Inner Harbor in 2008, and another in Annapolis in 2011.

We know. It’s hard to vote on a mac and cheese variety without actually tasting the dish. We invited nine Baltimore kids to try all three possibilities — we’ll be sharing their reviews on social media over the next week. So be sure to follow us on Facebook and Instagram to get their (cool) scoop!

The gift card winner will be announced on September 21st and the winning mac and cheese will be announced at the end of the month. Be sure to mark your calendar for October 21st. We’re cooking up something super fun with Miss Shirley’s Cafe at their Roland Park location. Details soon!

Next post Where To Play: Baltimore Family Events This Weekend, September 15-17 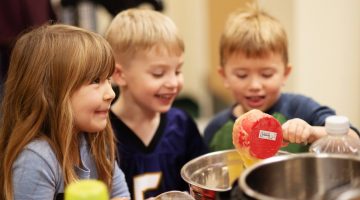 Sowing Seeds of Service and Stewardship at Greenspring Montessori School