“I was planning on going to 10 AM yoga. That’s what my plan was,” joked Maureen Walsh over a soy latte. “But then I met the faculty at St. James and heard what their needs were. And I thought, I could provide that for them.”

She’s signed on for a one-year adventure as the Interim Head of School at St. James Academy. St. James’ former Head of School, Karl Adler, transitioned into a new role at an Annapolis area school over the summer and the community was looking for someone to lead them while seeking a new permanent Head of School to assume leadership during 2018-2019 academic year.

After concluding her 15 year leadership as Head of School at The Bryn Mawr School last spring, Maureen is commuting to work for the first time ever. (Before Bryn Mawr, she spent 16 years at Poly Prep Country Day School in Brooklyn, New York.) It’s a beautiful drive up Dulaney Valley Road from her Mays Chapel home; it takes her exactly 22 minutes. Just enough time to squeeze in a little NPR.

Leading an independent school of 300 students is not exactly a leisurely morning yoga class. Although, there may be moments that require intentional breathing. It’s a challenge Maureen is fully embracing.

“Quite honestly, it’s a privilege to serve the faculty, students, and families here,” said Maureen.

This summer, Maureen has been meeting the team and families at St. James, all while gearing up for one of her favorite days of the year: the first day of school. “It’s not really a school until the children get here, right?” she said, grinning.

St. James may be a school with rich traditions of it’s own, but Maureen said she’ll be bringing a little Bryn Mawr to Monkton. The first day of school? It’s going to be a celebration. Balloons, music, and lots of fanfare as she welcomes SJA families back to campus. She’s looking forward to the help she’ll have greeting families, too. All of the eighth grade students.

“I’m really going to focus on the eighth graders this year,” said Maureen. “They didn’t choose to have a one-year head of school for their last year. I’m going to get to know every one of them.”

Although she’s been an administrator for years, Maureen really feels most at home on the ice. A former figure skater-turned-ice-hockey player-turned-coach, Maureen has been skating since she was 2 years old.

It’s those decades of experience as an ice hockey coach that really shape her leadership style, she said. She’s informal. Outgoing. Direct. And, doesn’t take herself too seriously.

“On the ice is when I am my true, authentic self. Chewing gum. Teaching kids to skate. You need a lot of patience to teach kids to skate,” said Maureen. “But when kids know that you are there for them, consistently, that’s really the essence of teaching.”

A sense of adventure and fully exploring your passions is something that Maureen has tried to instill in her own kids. She describes her children Grace, a senior at Bryn Mawr, and Tom, a senior at Washington College, as adventurous foodies who are always searching for the best Asian food experience they can find. (Their favorite places in Baltimore? Umi Sake and Ejji Ramen.) Grace is a musical theatre enthusiast planning to pursue theatre in college. Tom rows crew. Neither really found a passion for the ice like their mom. Grace tried it for one season, but said it was too cold.

During the summer, Maureen, her kids, and her husband Peter (a squash and tennis pro), like to retreat to their vacation home on Fire Island. Things were so busy this summer with her move to St. James, that she only made it there for a week in August. A little time to recharge the batteries before hitting the ground running at a new school.

Or maybe it’s like stepping out on to brand new ice. She can’t wait to have the St. James community come skate with her.

Previous Article Things To Do with Kids in Baltimore: August 28 - September 1

ARRGH! Join us for a pirate story adventure at the 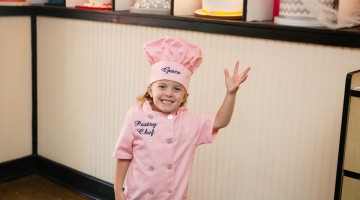