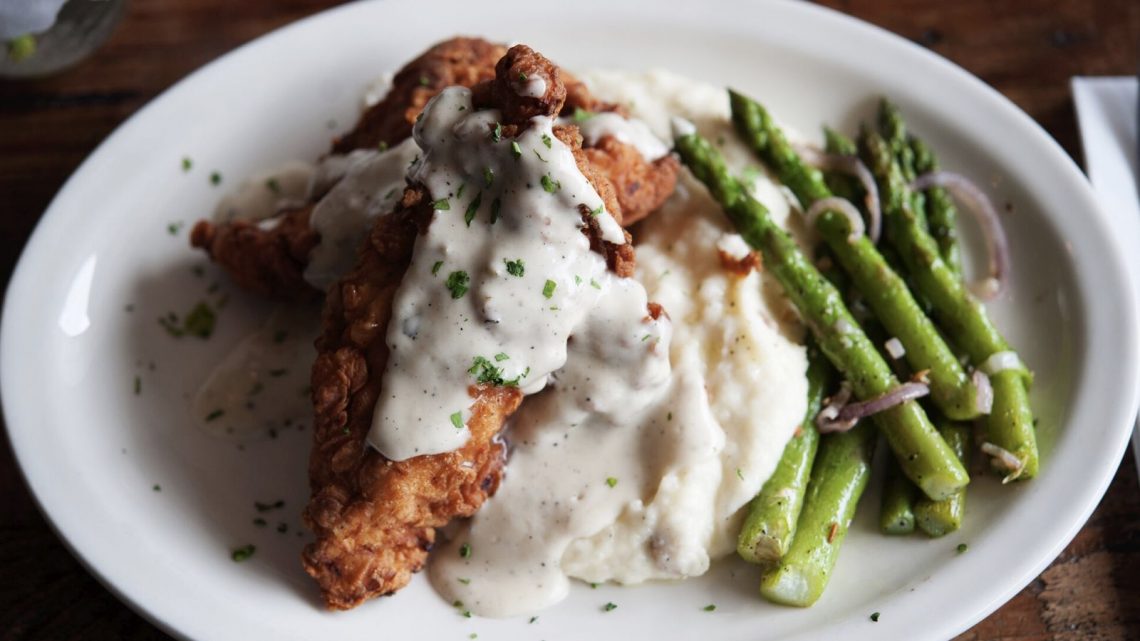 A few weeks ago, Dixon and I found ourselves at a friend’s house, surrounded by some of the best smells you can imagine, as we opened boxes and boxes of fried chicken. Half the boxes were from Royal Farms, half were from Hip Hop Fish & Chicken, and all of it was unbelievably good. We were in heaven.

That afternoon, we agreed that if you like a saltier coating, Hip Hop might be the chicken for you, but if thicker crust with an almost buttery flavor is your thing, RoFo is the way to go. Either way, you can’t lose.

The chicken box is a Baltimore delicacy of the best kind: greasy, great and fairly inexpensive.  But carry-out isn’t the only kind of fried chicken that Baltimore does well. Here, Dixon and I share some of our fave spots for fried chicken. In the comments, let us know where you think the best chicken is – we always like to try something new! 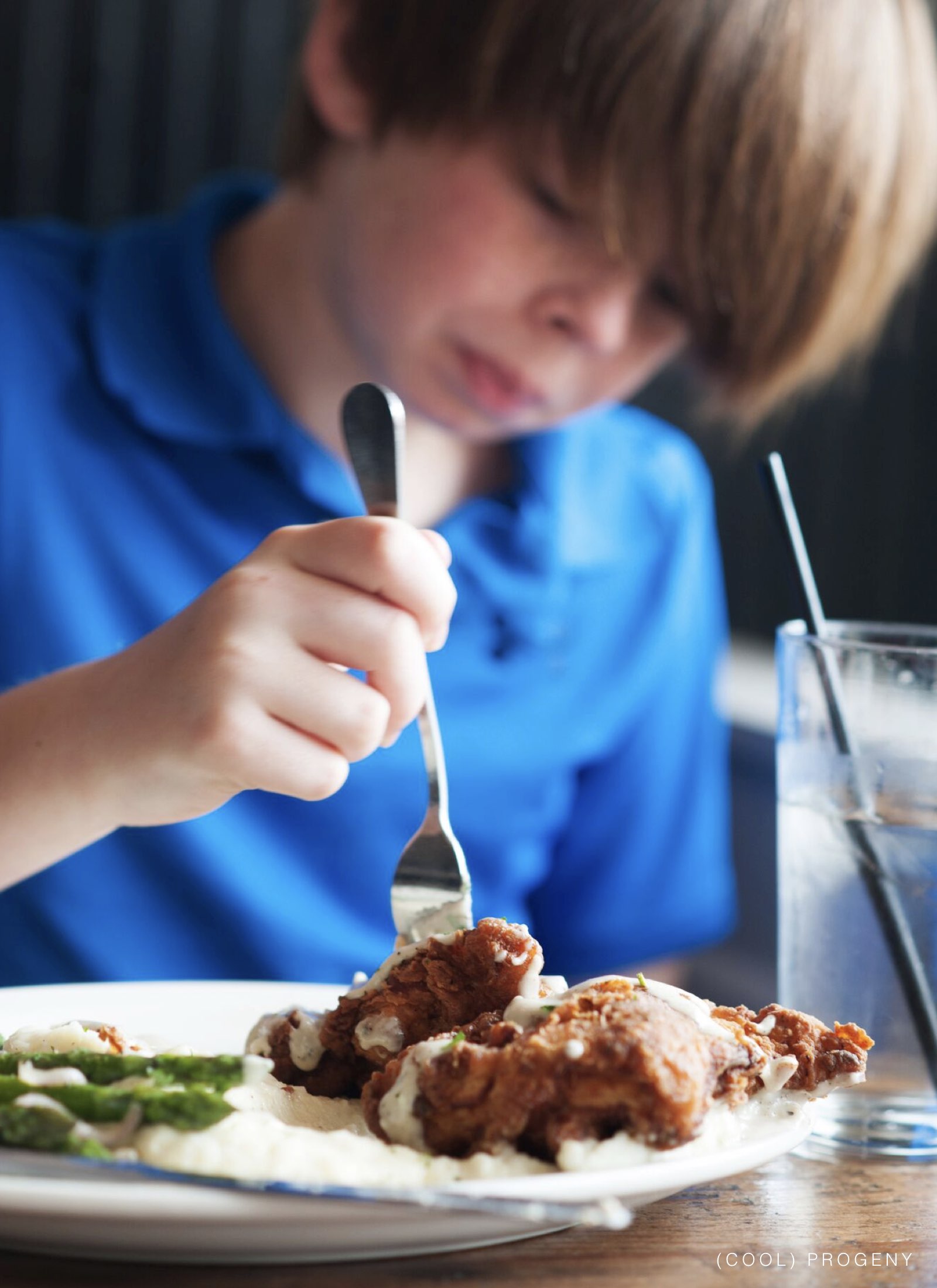 The menu at this extremely kid-friendly Hamilton BYOB changes fairly frequently; chef/owner Jason Daniloski likes to focus on seasonal ingredients. However, no matter when you go, the fried chicken dinner will likely be available. Get it. It’s great.

The chicken – which is gorgeously cooked, with a thick, crispy coating – comes with mashed potatoes, veggies and pale, herbaceous gravy that you might end up wanting to put on everything. 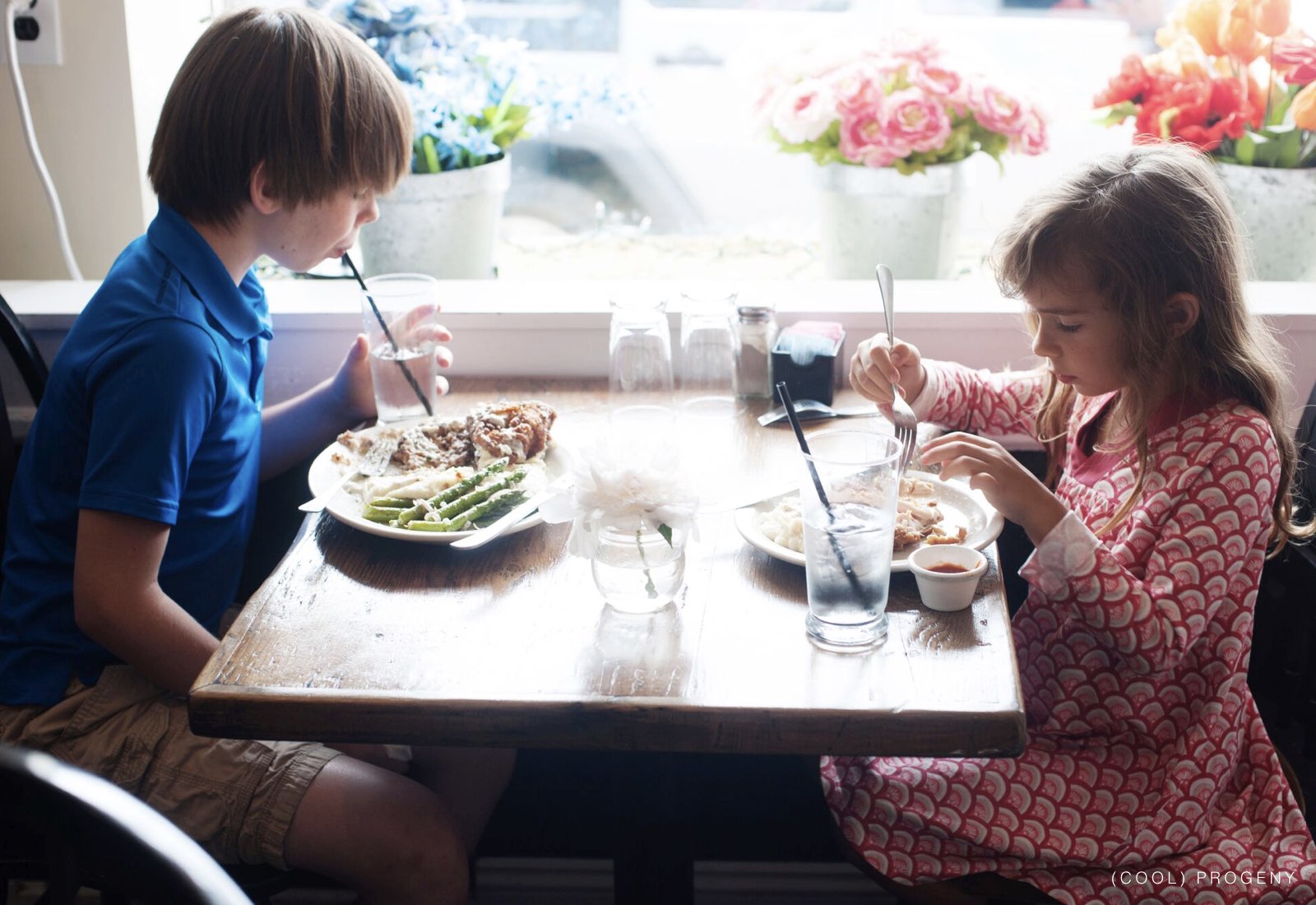 If you’re an experimental sort, try the hangover hash from the brunch menu. Fried chicken livers aren’t my thing – or Dixon’s – but we have been assured by the third member of our family (husband/dad Cooper) that Chef Daniloski knows what he’s doing when it comes to frying the liver. 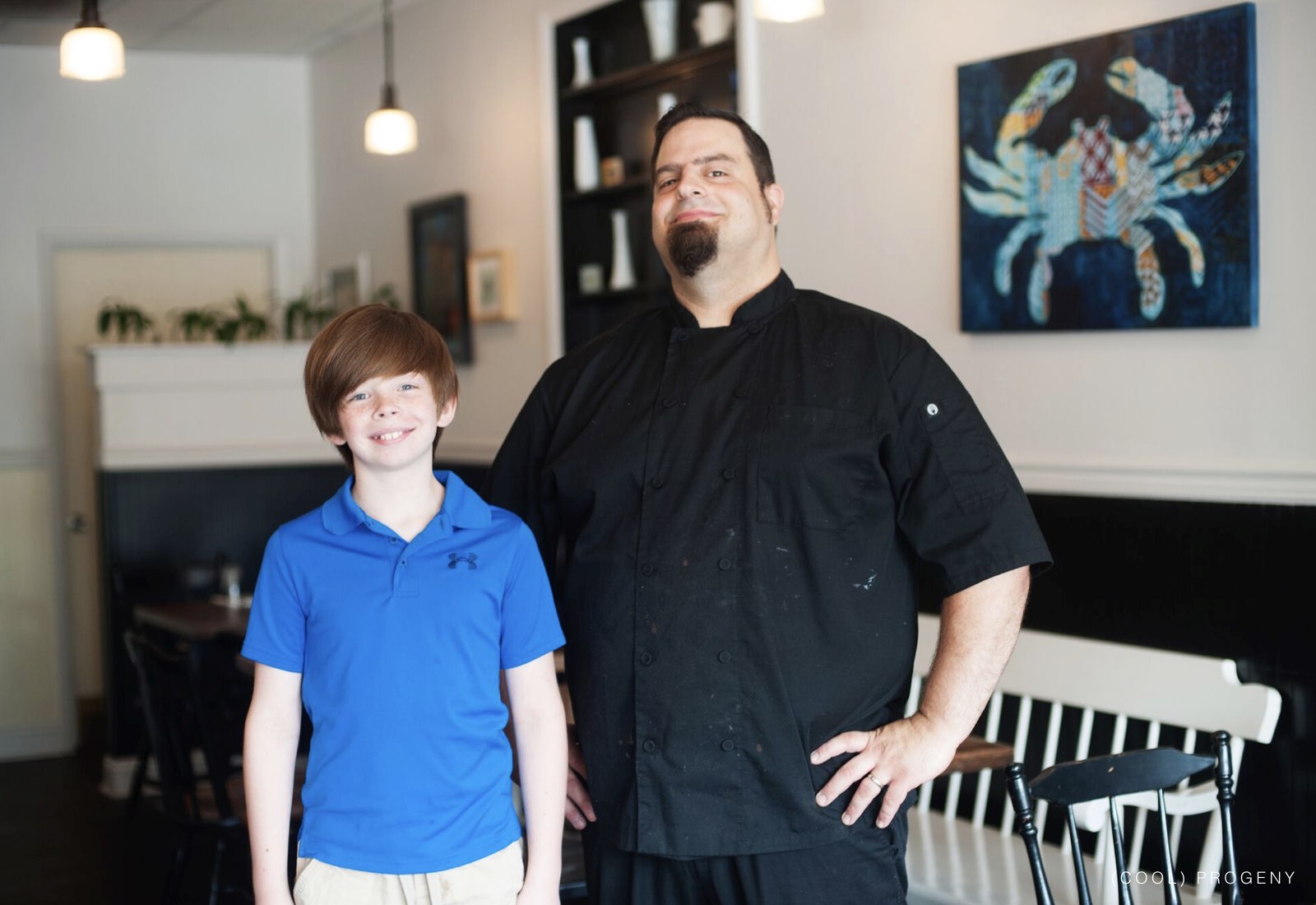 Friendly Farm is a bit of a drive from Baltimore proper, but what a drive it is: rolling countryside, pretty trees, big skies.

Once you get there, the magic continues. The dining hall-style restaurant – you order at the counter and someone brings the food to you – is located on a big plot of Upperco farmland. Before or after you eat, you can wander down to the pond and commune with the ducks, or just sit on the grass and contemplate life and food.

Every meal at Friendly Farm starts with a bunch of little bowls of goodies, delivered for the table to share. Cinnamon apples, whole grain bread with apple butter, pickle slices – they’re all good, though Dixon’s top choice is the sugar biscuit. The sugar-dusted biscuits are glorious.

But how’s the chicken? It’s exactly right, unfussy and juicy, with a coating that’s both crunchy and light. Just like everything else at Friendly Farm, you get the sense that the chicken has been prepared the same way since the place opened back in 1959 – and that’s a good thing.

Pepe’s might be known best for its pizza (and good pizza it is!) but its fried chicken, which comes with excellent French fries, is worth a try.

Unlike a lot of local fried chicken spots, Pepe’s chicken doesn’t rely on a thick layer of batter to add flavor. Instead, the skin is just lightly coated – but well-seasoned – before frying, resulting in a paper-thin crust around the chicken itself.

The end result feels more delicate that other fried chicken options – and just as tasty!

This Canton bar is known for its warm look and broad selection of bourbons, but that shouldn’t scare parents in search of a solid lunch or brunch. The menu is a good one overall, but fried chicken is the thing to get at Cardinal Tavern; it’s available on sandwiches (with a handful of sauce toppings) and as a platter, with gloriously salty fries and a flaky biscuit (and honey butter to slather on top).

The coating is nicely seasoned and the kitchen knows exactly how to cook it to achieve the best balance between crispy coating and juicy meat. Every piece, whether it’s a breast, thigh or drumstick, is terrific.

Side note for parents: if you’re interested in a drink pairing, you can’t go wrong with the Bloody Mary. It comes with over-the-top garnishes (Shrimp! Okra!) and it is exactly the right level of spicy.

With a wide variety of food options, a fun, upbeat atmosphere and a casual vibe where kids with not-quite-inside-voices aren’t completely out of place, Remington’s new food hall, R. House, is one of the hottest kid-friendly tickets in town.

We love everything at BRD, from the wings to the delectable lime mint cooler, but my absolute favorite thing on Alexander Janian’s menu at the chicken-focused stall the Baltimore BRD sandwich. Two crispy hunks of chicken, brined, battered and double-fried, are topped with pickles, Old Bay and spicy-creamy BRD sauce.

The double-fried part of the equation is something that makes BRD’s fried chicken stand out. It’s super-crispy, in the very best way.

Dixon is more of a purist – he skips the pickles (which I think is crazy) but loves the BRD sauce. A word of warning: BRD’s toppings can be spicy, so proceed with caution. 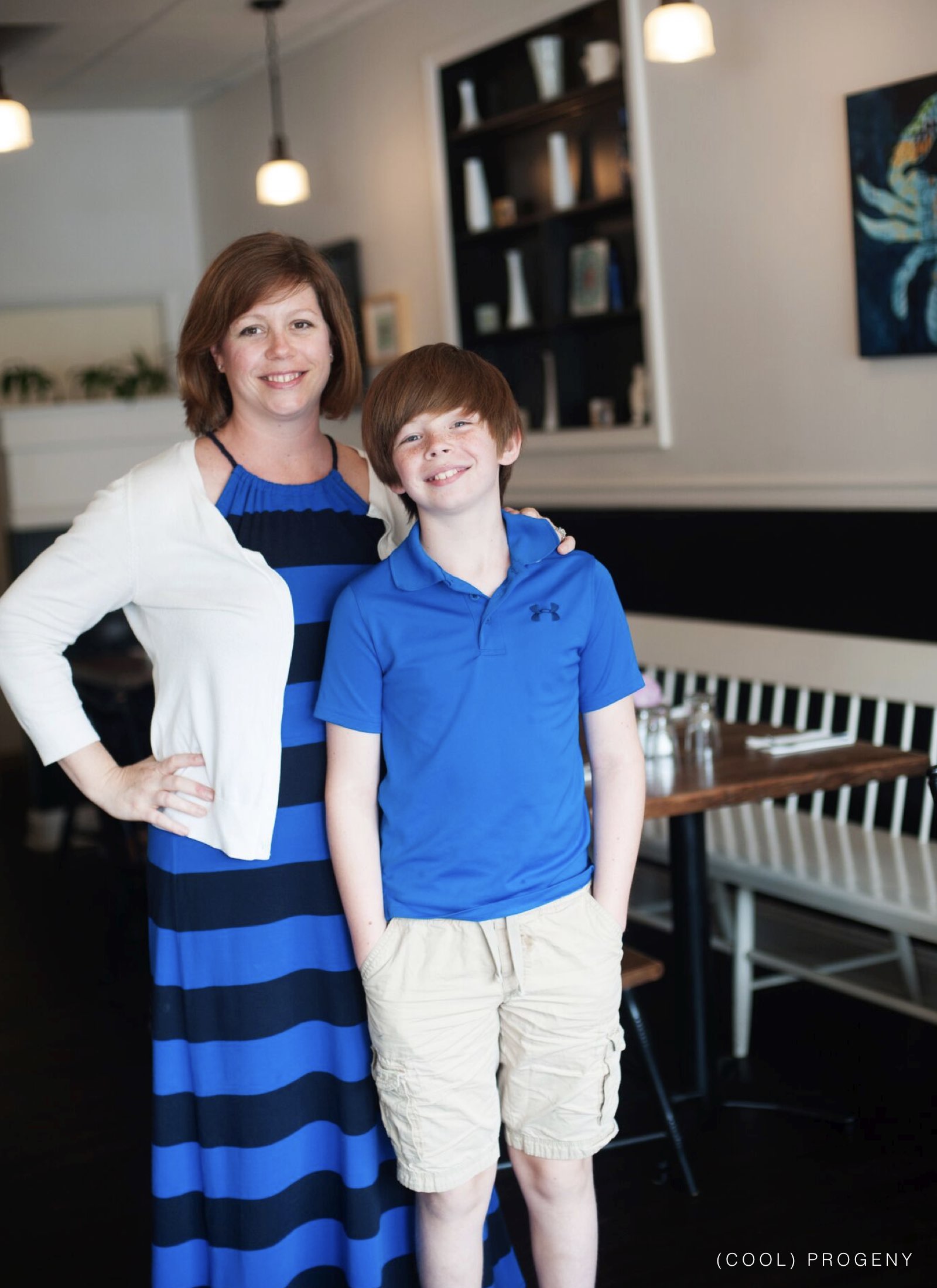 Today is #RareDiseaseDay. What defines a rare dise 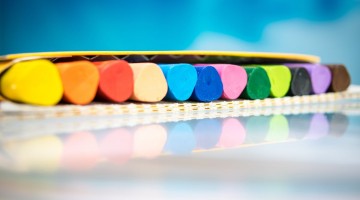