“It’s hard when you’re the first one on your family breaking with tradition,” said Lara Nicolson. A small group of us was gathered over coffee and pastries at Johnny’s in Roland Park to talk about one of those topics you typically avoid during first-time chats: religion.

Lara is the Interfaith Engagement Director for the Jewish Community Center of Greater Baltimore. She characterizes her job as one that is truly about fostering connections. From helping synagogues embrace those outside the Jewish faith or welcome those new to the faith, to matching officiants with interfaith couples wishing to marry, to encouraging those from mixed faith backgrounds that are thinking about starting a family to wrestle with the tough questions…

What role will religion play in our family?

How each of us engages with religion — and share facets of faith with our children — is uniquely personal. JCC’s interfaith resources hope to open dialogue and provide connections so that interfaith families can find their own equilibrium in Baltimore’s Jewish community.

“I want interfaith families to feel connected to the Jewish community here in Baltimore,” said Lara.

Admittedly, that might be difficult if you’re a mom with a Christian upbringing who suddenly finds yourself raising Jewish children. How can you learn about Jewish rituals and transitions? Where can you ask questions without fear that you may be inadvertently offending the person you’re asking?

“I learned a lot alongside my kids. Shalom Sesame and PJ Library were really helpful!” said Diana Coyle, with a grin over coffee at Johnny’s earlier this month. “But the Mother’s Circle was really wonderful because I was around others experiencing the same things.”

“You didn’t have to be embarrassed about asking a question,” chimed in Kim Salabsky.

What is the Mother’s Circle?  Formally, it’s a three-part education series provided through JCC’s interfaith services that introduces non-Jewish mothers raising Jewish children to concepts of Judaism.  Informally, it’s a network of women who bond over shared experiences and provide support. The atmosphere is less class-like and more social. Friendships certainly last beyond the length of the classes themselves.

Both Diana and Kim are Baltimore moms who were raised Catholic and are now raising Jewish children. Their families attend different synagogues in the area and, although they might seem one another at Tot Shabbat around town, the two would not have had occasion to meet outside of the Mother’s Circle. Because of their experiences there, there’s an easy camaraderie between them that was evident as we delved into tough topics like how they handle Christmas — with it’s own rich traditions, rooted in their own childhood —  in their homes now. Or how to navigate culture at a Jewish preschool. Or how they told their own parents of the decision to raise their children Jewish. The heavy topics were broken up by forays into Nespresso machine reviews, how we met our husbands, and the best homemade ice cream recipes. (Regardless of religious affiliations, we’re all moms. Those are things we talk about.)

How religion is practiced looks different for each of these families. Lara and her family keep Kosher at home, but her husband (who is not Jewish) makes a point to order bacon if they’re out to brunch. Kim sends her son to a Jewish preschool while Diana sought a congregation with a great Hebrew school since her children do not attend a religious-affiliated school. Kim continues celebrating Christmas traditions in her home — and Diana joked that she’s trying to convince her husband that the pastel decorations at Target could easily be Passover decorations.

“But that’s really what being an interfaith family means,” said Kim. “You find a way to bring faith to your family in a way that works for your family.”

The Mother’s Circle? It provides a support network to find the path that works for you.

learn more about the mother’s circle

The next Mother’s Circle Mini-Course starts on April 30th and meets Sundays, April 30, May 7, May 21 from 10:00 AM – 12:00 PM at the Downtown Baltimore JCC.  The course provides FREE education and support for women of other religious backgrounds who are raising Jewish children. The three sessions focus on Jewish rituals, ethics, and the how-to’s of creating a Jewish home. REGISTER HERE

about our sponsor: jewish community center of greater baltimore

Next post #browngirlsdoballet: baltimore mom and daughter team for portrait of a dancer series

We can't wait for our Edventures to begin next wee 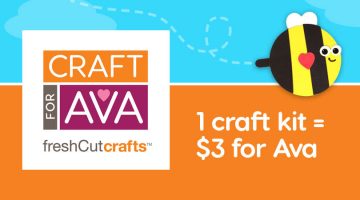 Craft for a Cause with Fresh Cut Crafts!