coffee with jae sherwood, author of little leona of monsters and fire

She found herself standing in front of the Annapolis Fire Department, unannounced, a draft of the poem in hand. Two men answered her knock — and were a bit surprised by who they found on the other side of the door. Perhaps more surprised when she asked if she could read to them.  But they agreed. And listened.

“Yes.” They said she had written everything correctly.

“Would you read it to your kids?”

Only one of the men had a child. He answered without hesitation.

That’s when she knew she had something.

Annapolis author Jae Sherwood is a regular at Ahh, Coffee. When I mentioned I was meeting her to the barista while ordering my drink, she told me she would get Jae’s Chai Tea Latte started so it was there when she walked in the door.

Fresh off an interview with WJZ, Jae arrived dressed in blue and ready to tell me all about Leona — the heroine of her first self-published book for kids: Little Leona of Monsters and Fire. Like most young heroines, Leona is an imaginative girl who loves to play.  She particularly loves to dress up and slay imaginary dragons. But one day she’s confronted with a real dragon: a fire.

“Because I’m a girl,” said Jae. “And the world needs more books with girls in them.”

{Can’t argue with that.}

Jae didn’t set out to create a series of books focusing on safety issues, but she’s found a need in the market for relatable characters tackling tough issues. Using verse to tell stories over prose means emerging readers have an easier time decoding (even those ‘big words’) and also retaining the information because it’s song-like.

“I didn’t shy away from using big words,” said Jae, who happens to be a former English teacher. “One reviewer said I shouldn’t have used words like circumstance. But kids will rise the occasion — if we give them the words.”

Jae doesn’t shy away from tough topics, either. Fire safety is a real concern, and one that many parents might not think they need to talk about with their kids. (As long as the smoke detectors are working, right?) But does your child know what to do when the smoke alarm goes off?

Leona’s story has become a tool to teach kids about fire safety — and what to do should they ever find themselves face to face with a real fire situation. Jae has enjoyed traveling to schools and local libraries, many times in tandem with the local fire department, to read her story and talk with children.

Her three children are now grown and starting their own families. Writing children’s books gives her another avenue for connecting with her grandchildren (when we met, Jae was anxiously awaiting the arrival of her first grandchild). Believe it or not, the book series is a bit of a family affair. Her son-in-law created the illustrations.

I asked Jae about what’s next for Leona — and it seems she’s headed to the Chesapeake Bay for a book on boat safety.  Keep an eye out for it. The story is set for publication this year.

And then — who knows what adventures await?

Little Leona of Monsters and Fire is available on Amazon. To learn more about Jae and the Little Leona Books, visit Jae’s website. Photos by Laura Black. 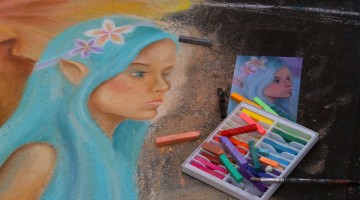