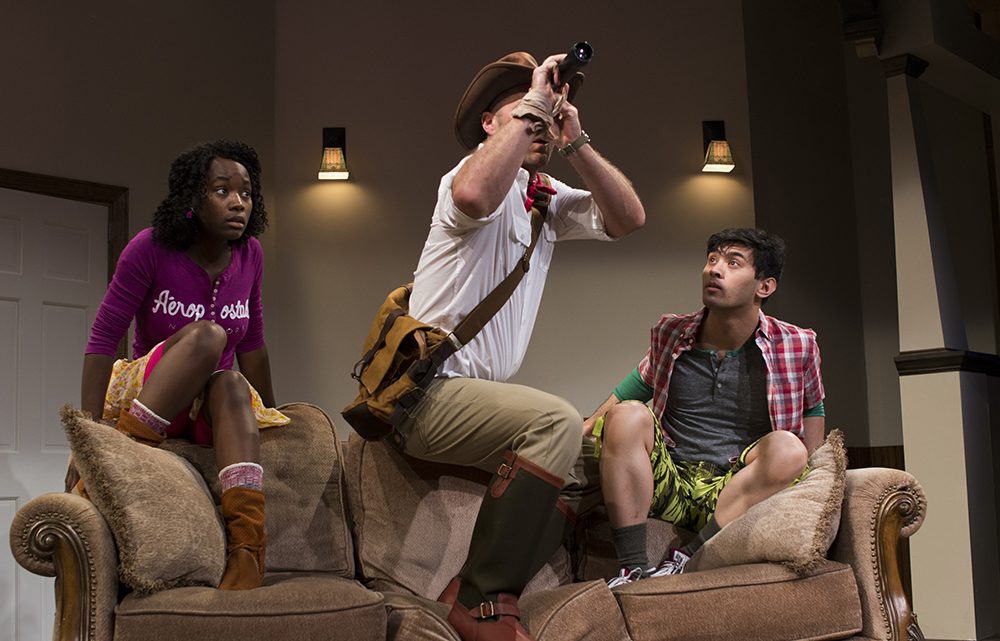 As summer temps heat up, so does the pint-sized stage! Check out these great LIVE family-friendly shows in and around the city.

Join Ariel, Prince Eric, Sebastian, King Triton, Flounder, Scuttle and all their underwater friends as the Charm City Players brig to life their journey Under the Sea in a magical musical about a mermaid who dreams of the world above the sea and gives up her voice to find love. Add to the magic as Princess Ariel and her Friends host a special pre-show Royal Tea Party where you can greet them, take pictures and get autographs.  Special combo ticket price includes reservations at one of Ariel’s Royal Tables, Light Fare food and drinks PLUS premium seating for the show. MORE

STINKY KIDS – The Musical presented by Way Off Broadway Children’s Theatre
Runs through July 30th, Frederick
Another popular children’s book series comes to life on the WOB stage with the Frederick-area premiere of Stinkykids – The Musical! Britt loves making everyone happy. But this girl who never gets in trouble is in a sticky situation – literally: She woke up with an impossibly epic wad of gum stuck in her hair. All of Britt’s friends are depending on her parents to take them to the new MegaJumper 3000 at Captain Happy’s Jumpy-Fun-Super-Bouncy Indoor Place, so she definitely doesn’t want to disappoint anyone. Britt must rely on her mischievous friends to go with her on an unexpected adventure across their neighborhood to solve the problem before her parents find out and possibly cancel the trip! MORE

The Chris Van Allsburg classic comes to life in this world premier play! On a dull day, Judy and Peter find a mysterious old board game. One live lion, an erupting volcano, and some destructive monkeys later, the children are plunged into an experience they’ll never forget. Will they ever finish this mysterious magic game and claim Jumanji?! MORE

Based on Disney’s Oscar nominated film, Disney’s Mulan JR., is a heartwarming celebration of culture, honor, and the fighting spirit. With hit songs and a story packed with action, humor and heart, Disney’s Mulan JR. brings ancient China to life with a modern sensibility. MORE

The Little Mermaid presented by Imagination Stage
Runs through August 14th, Bethesda
In this faithful re-telling of the Hans Christian Andersen original, the Little Mermaid falls in love with a human Prince, and longs to join him in his world above the waves. Despite the warnings of her Mer-family, the Little Mermaid seeks out the Enchantress who trades her pair of legs for the mermaid’s beautiful singing voice. A follow-up to the highly acclaimed The Lion, The Witch & The Wardrobe (2012), this collaboration between Imagination Stage and The Washington Ballet features dance, puppets, music, and singing in a highly theatrical and epic style of performance. MORE

Hairspray presented by  Toby’s Dinner Theatre
Runs through September 4th, Columbia
Good morning, Baltimore! It’s 1962 and Tracy Turnbald has only one desire — to dance on the popular Corny Collins show! When her dream comes true, Tracy is transformed from social outcast to sudden star, but she must use her newfound power to vanquish the reigning Teen Queen, win the affections of heartthrob Link Larkin, and integrate a tv network — all without denting her ‘do! MORE

Backyard Theatre for Children presented by Strathmore
Thursdays in July, Bethesda
Moona Luna, Recess Monkey and more! Head to Strathmore on Thursday mornings in July for lots of rockin’ fun!Parent and child admission to Backyard Theater performances is the same price. Admission is free for kids 2 years and under. You can absolutely pack a lunch bag — but be sure to save room for free snow cones! MORE

Set during the last years of New York City’s celebrated High School for the Performing Arts in the early 1980s, “Fame JR.” is the bittersweet but ultimately inspiring story of a diverse group of students who commit to four years of grueling artistic and academic work.  Performed by Carroll County’s most talented high school-aged singers, actors, dancers, and musicians. MORE

Based on one of Hans Christian Andersen’s most beloved stories and the classic animated film, Disney’s The Little Mermaid is a hauntingly beautiful love story for the ages. With music by eight-time Academy Award winner, Alan Menken, lyrics by Howard Ashman and Glenn Slater and a compelling book by Doug Wright, this fishy fable will capture your heart with its irresistible songs, including “Under the Sea,” “Kiss the Girl” and “Part of Your World.” MORE

James Lapine and Stephen Sondheim take everyone’s favorite storybook characters and bring them together for a timeless yet relevant piece and rare modern classic. The story follows a Baker and his wife who wish to have a child, Cinderella who wishes to attend the King’s Festival, and Jack who wishes his cow would give milk. When the Baker and his wife learn that they cannot have a child because of a Witch’s curse, the two set off on a journey to break the curse. Everyone’s wish is granted, but the consequences of their actions return to haunt them later with disastrous results.  MORE

Told from the point of view of the Magic Mirror, who sees all, this is the story of Snow White that we know from childhood stories. There is, of course, Snow White and the Seven Dwarfs, as well as the evil Queen, and the Prince who comes in to save the day at the end! MORE