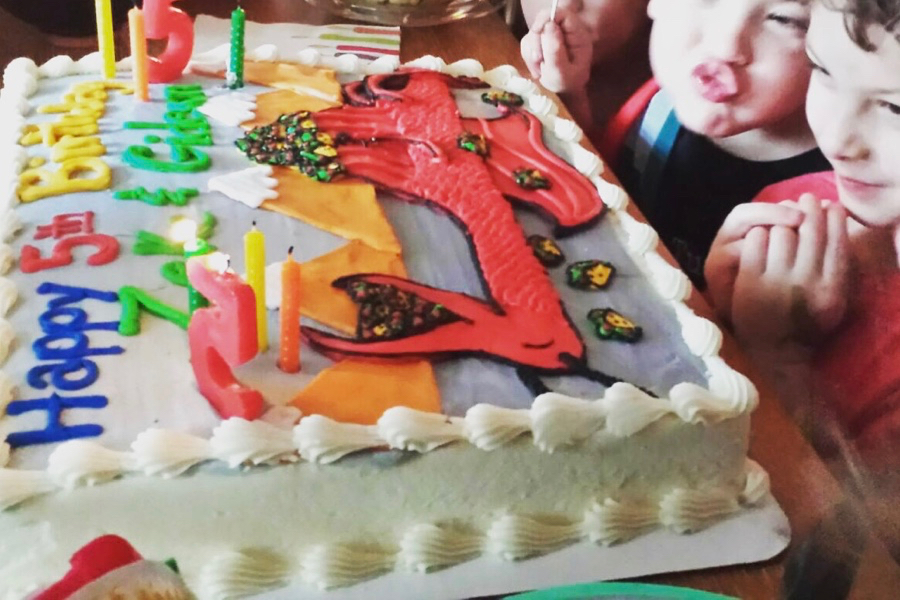 A few months ago while reading Dragons Love Tacos for the bazillionth time I had a brilliant idea: this would be the greatest birthday party theme ever!

I might have been a bit more excited than the rest of the family, but everyone agreed it was a fun idea – especially the birthday boys, Zeke & Gideon, who would be turning five. We knew we wanted a small party. The boys are in two different classes and the idea of that many kids was just overwhelming. Each was allowed to invite just a few kids and we included siblings. We haven’t hosted a home party since my 9-year old’s first birthday when I swore “never again!” But I liked the idea of no time restraint and getting to do exactly what we wanted in terms of food and activity.

… and the fact that we hosted the party at our home allowed us to easily reschedule to the following weekend when a little snowstorm known as the Jonas Blizzard blew through on the first party date. 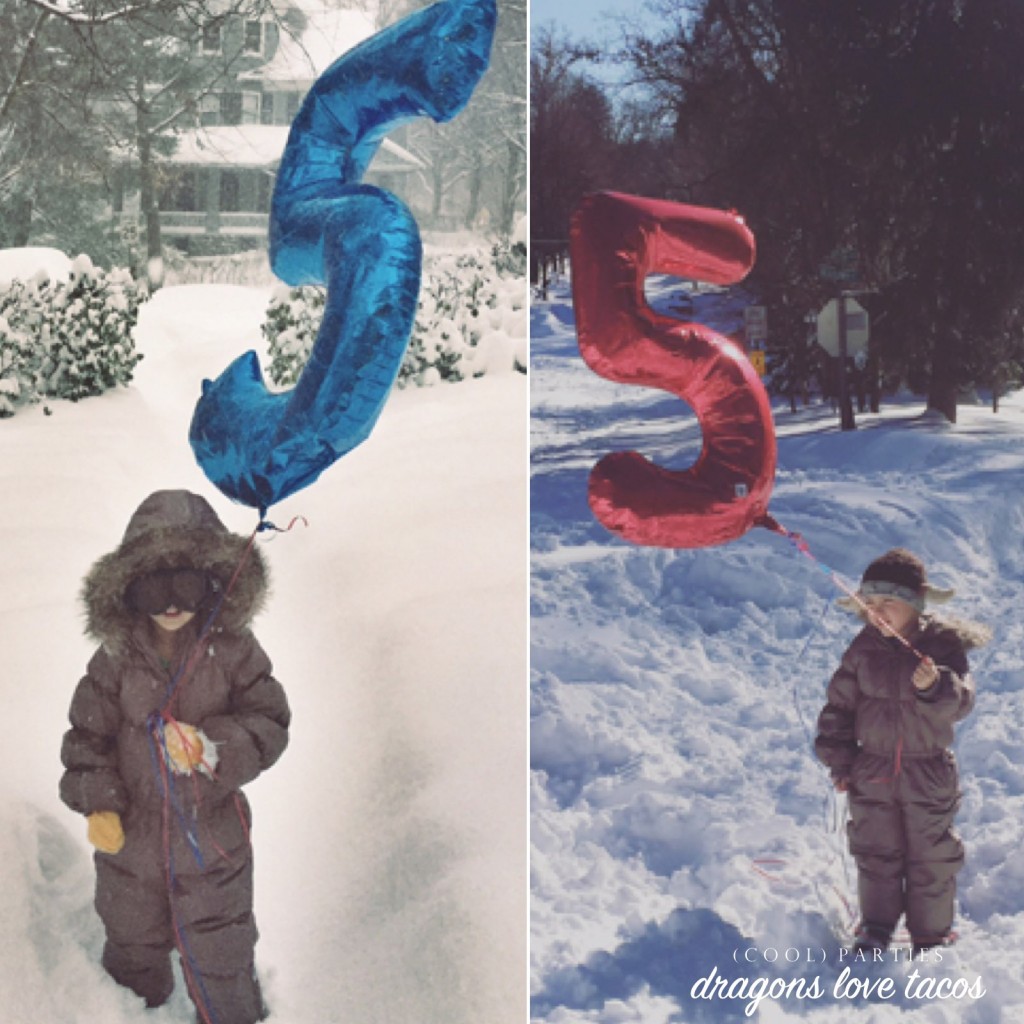 So, we had the theme. Now we needed invitations. My co-worker created these for the party, which I emailed out to each family. (And she was nice enough to make me one with the new date, too.) 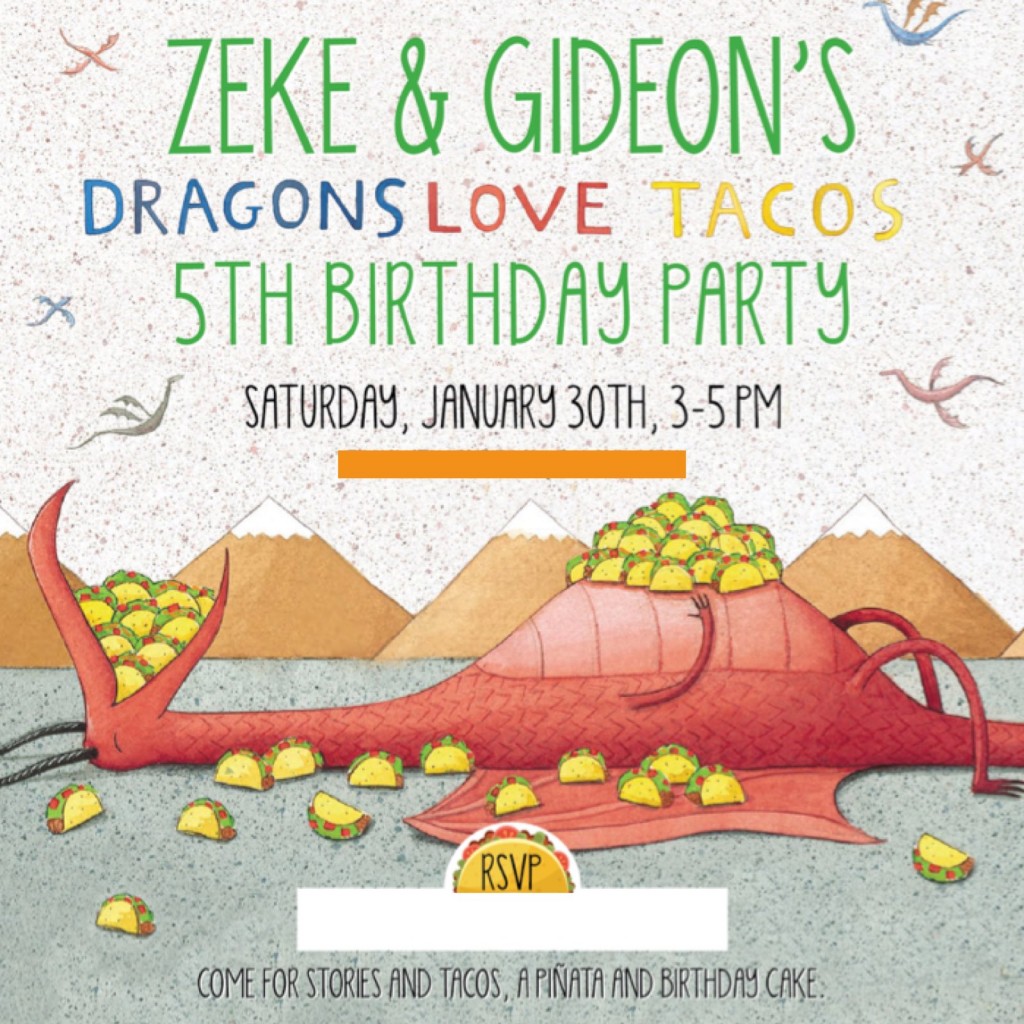 Then I hit etsy and Pinterest… and found out I was not the first person to come up with this birthday theme. (I am not surprised, since it’s an awesome book and one my kids can recite from memory.)

I knew for a successful home party I needed three things: an activity, lots of food, and a piñata. 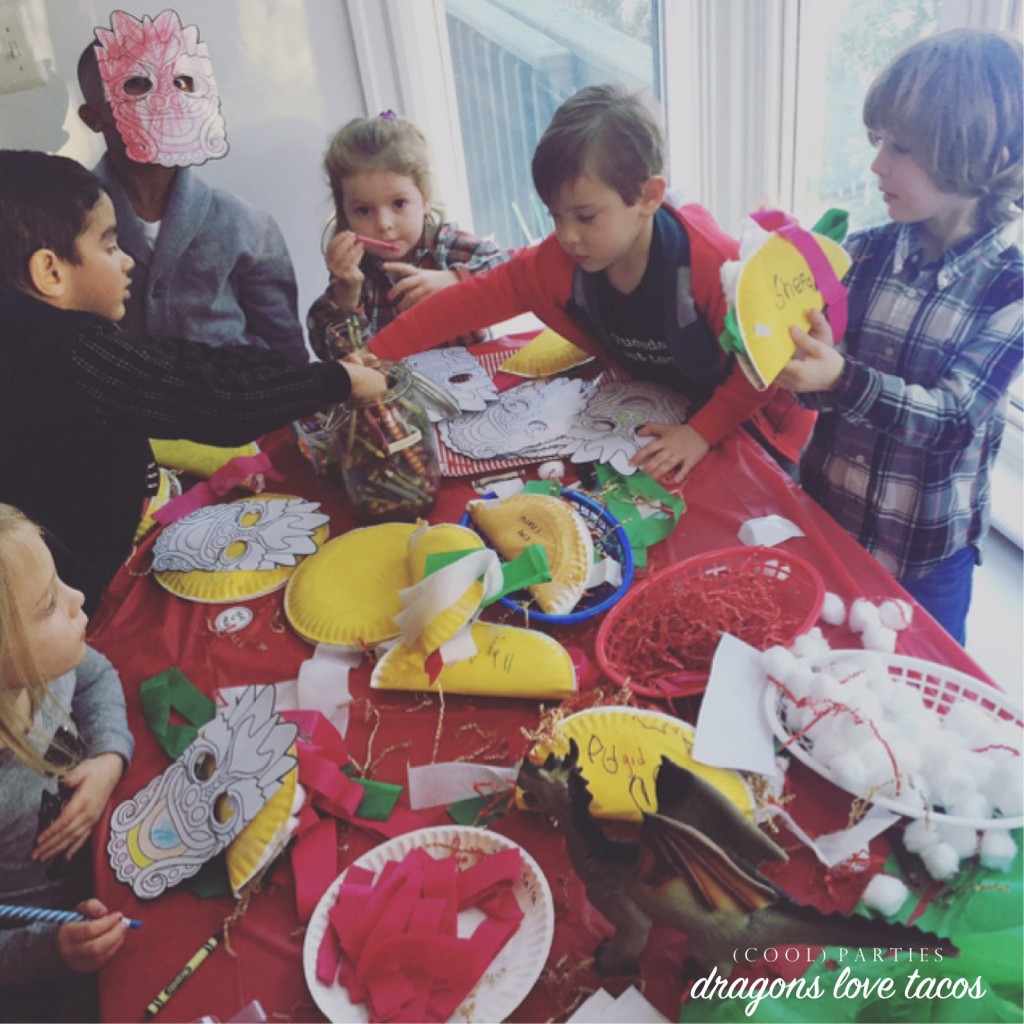 The only sensible activity was tacos, of course. Paper plate ones, to be exact. To help expedite the process, I painted all the “taco shells” the night before. That way the kids could just spend their time filling them instead of waiting for the paint to dry. We had meat, tomatoes, sour cream, lettuce, and spicy salsa (of course) made from tissue paper and shredded paper I found at Target and Michael’s. The cotton balls were used filler to help the taco be nice and grande. (I also found dragon masks at Party City as part of a Chinese New Year display. And I ordered Dragon Hand tattoos from ebay.) 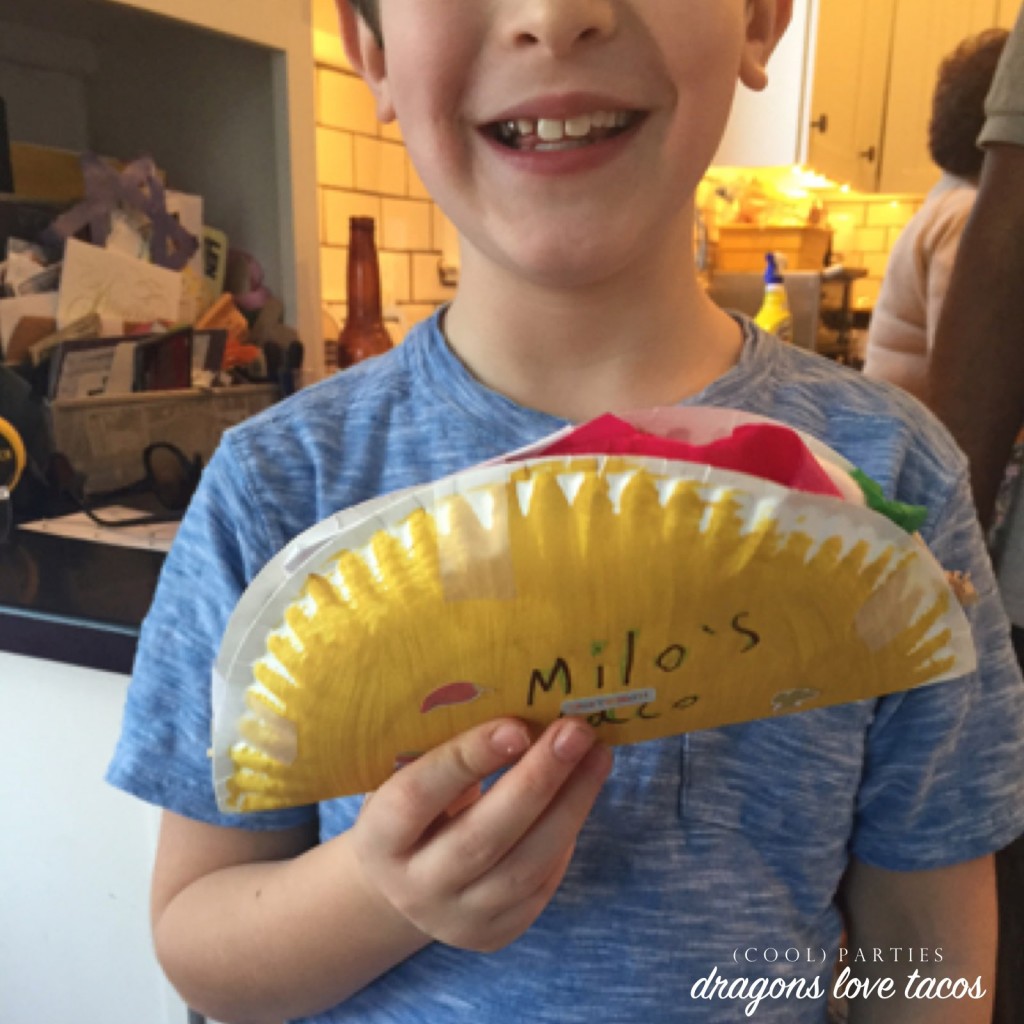 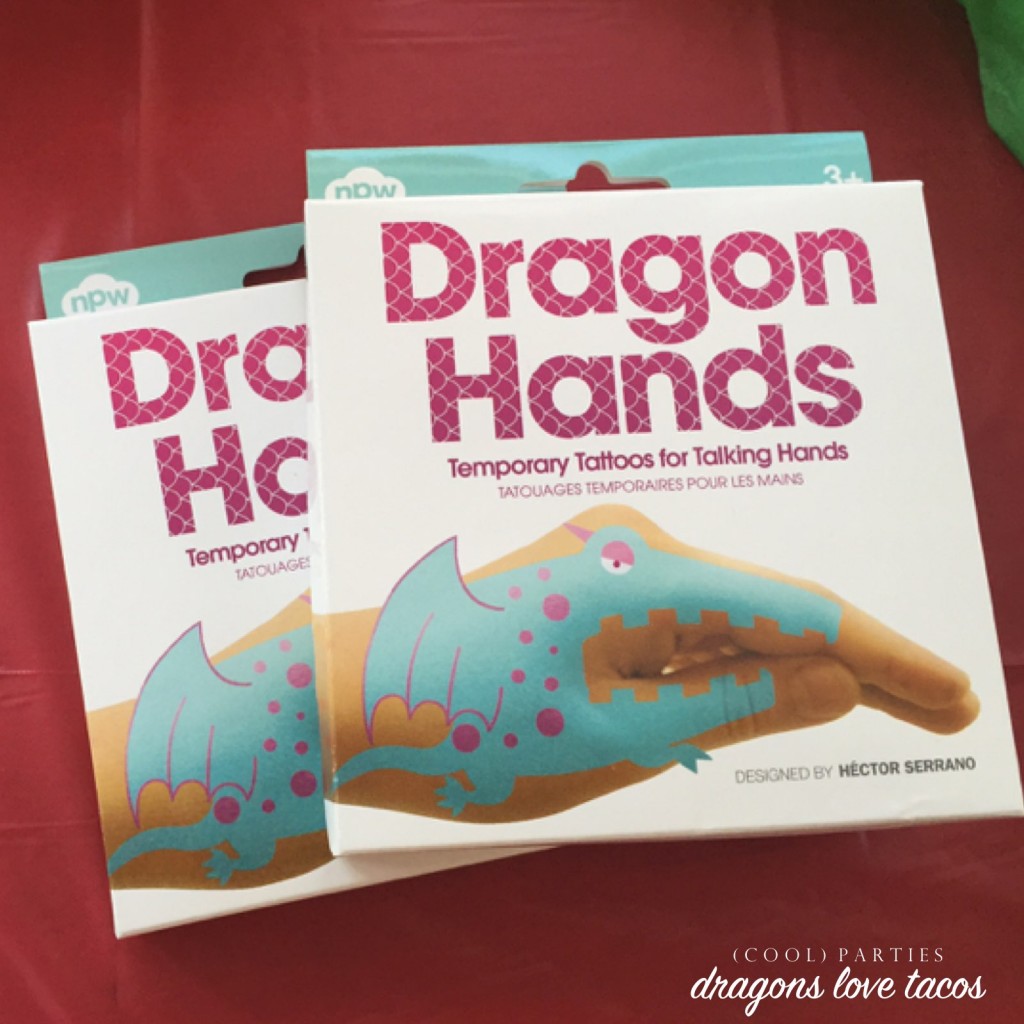 Next was the food. Now it just happens that my husband is a GM for Chipotle, so the food was kind of a no-brainer. We ordered catering through Chipotle and served tacos, guacamole, beans (black and pinto), rice, salsa, and chips. It was really good, really easy (and not just because he works there), and it was nice not to have to spend all that time making everything ourselves. (Another bonus of an at home party: beer!) 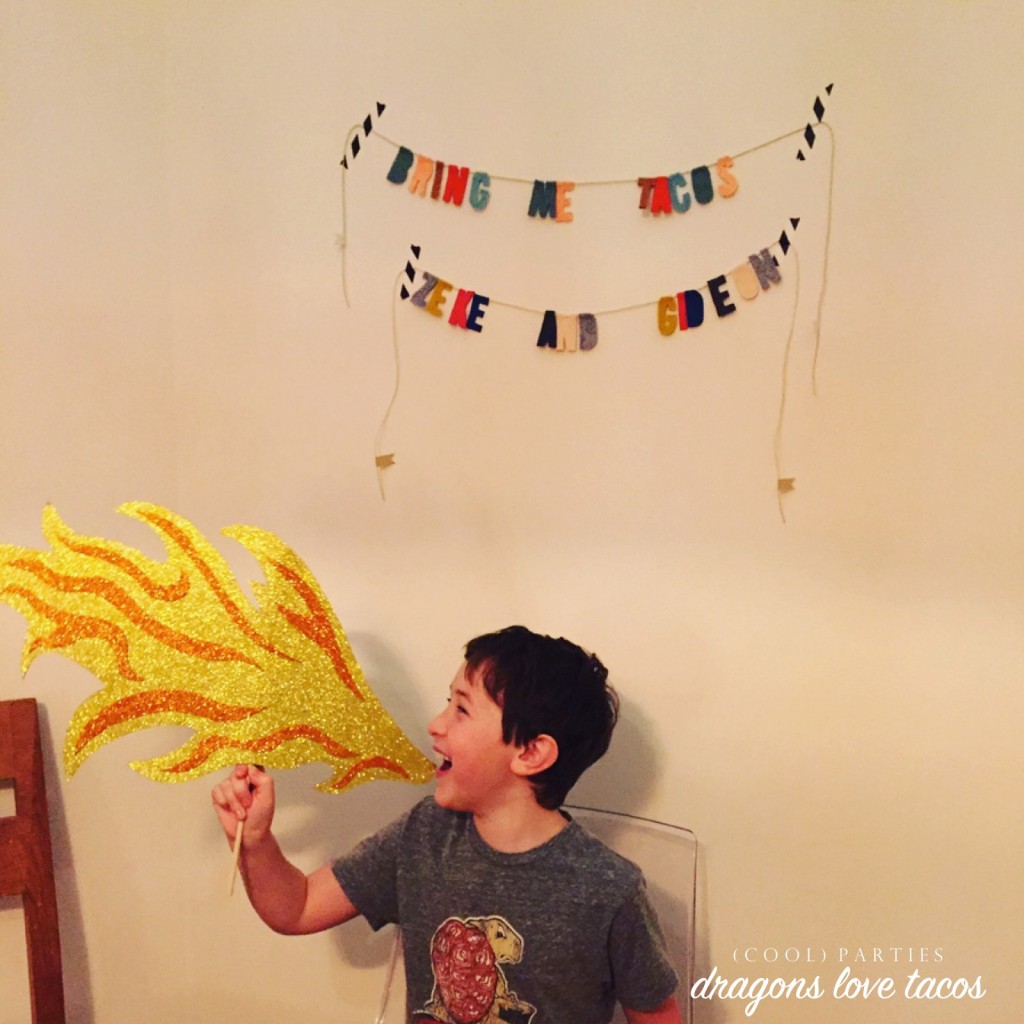 I kept the decorations pretty simple. I ordered some little banners from Tastefully Mismatched. A company I knew from my visits to Austin to see my sister. The Zeke & Gideon banner is now hanging on their bedroom door, the Bring Me Tacos banner was from my sister last year as a joke gift to my husband (see Chipotle connection).

I should also mention that we kicked off the party with a reading of the book to familiarize the kids with the story. Most had read the book before and helped read along. 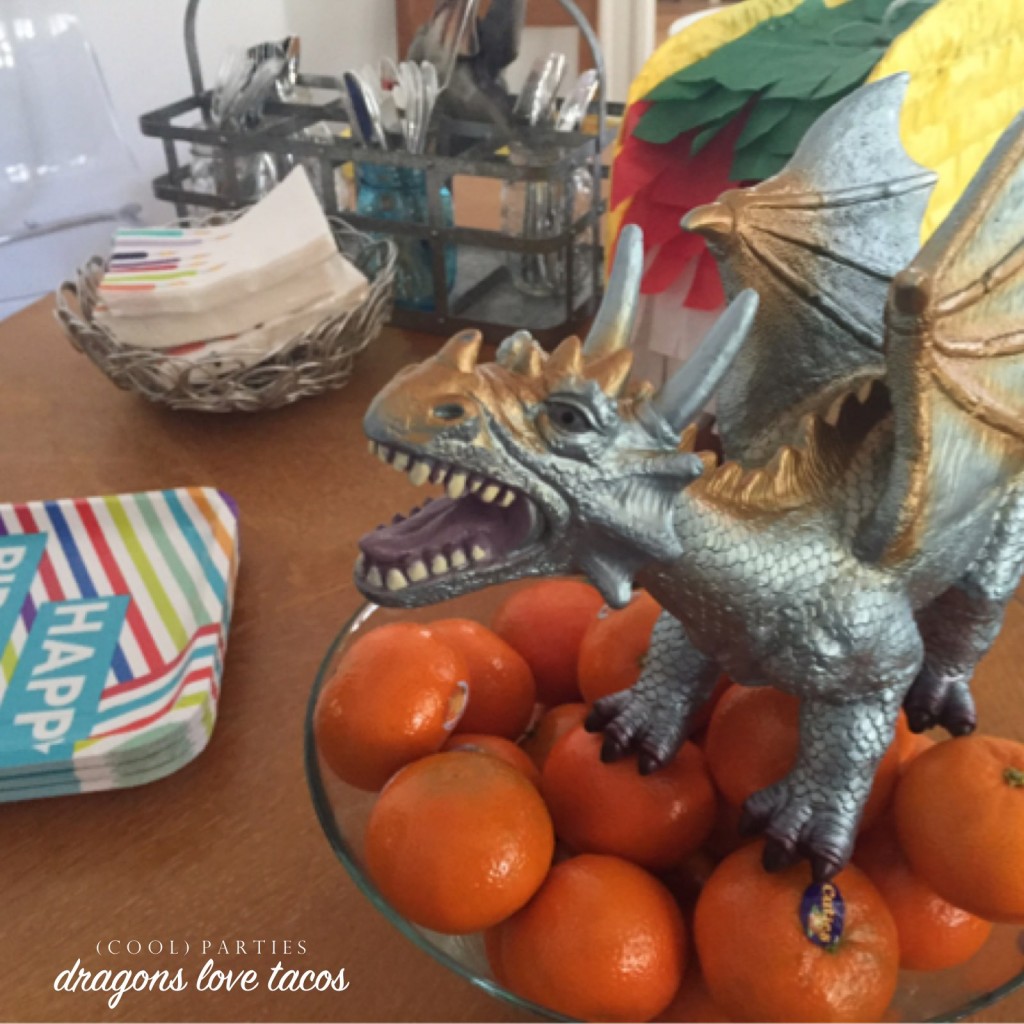 I bought some plastic dragons at Michael’s and had them in various spots around the house.

We ordered a cake from Graul’s and they did a fantastic job replicating the image. (And man do they know how to make a good cake!) 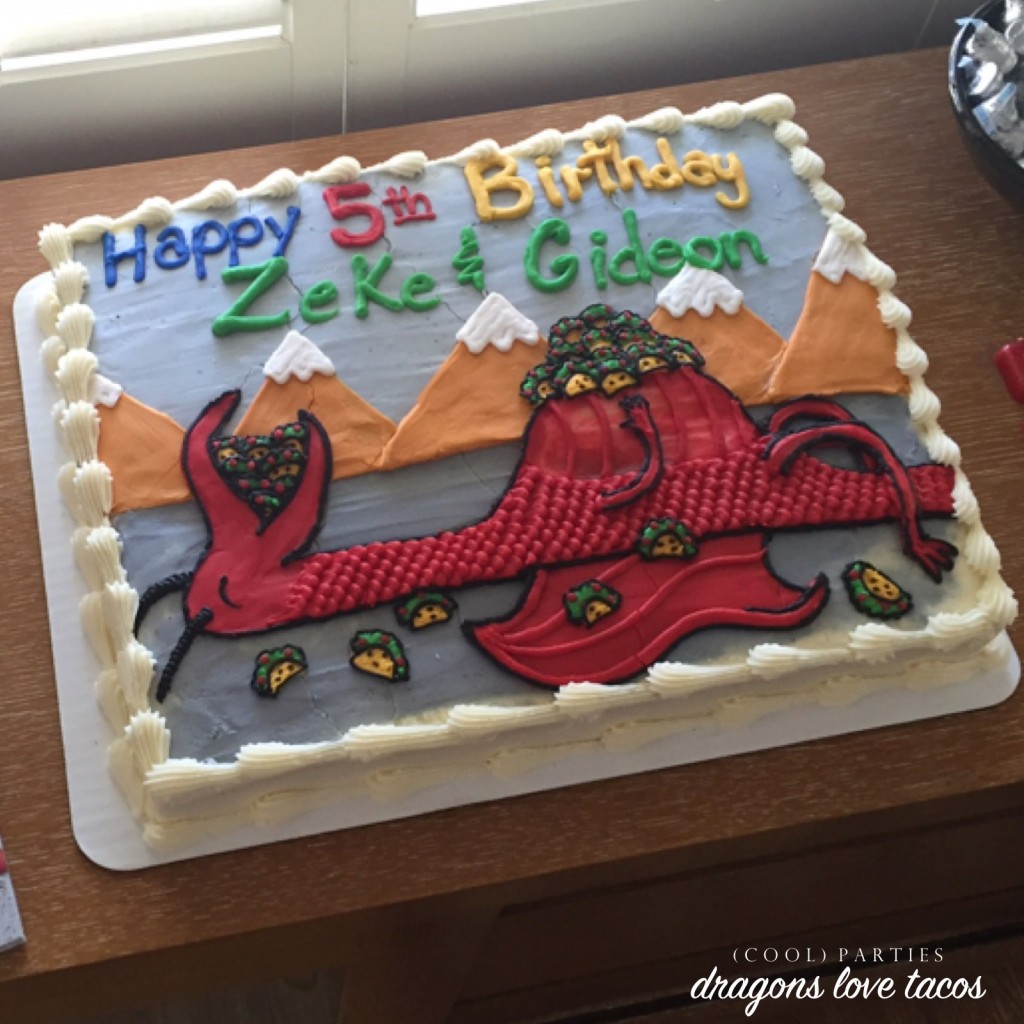 I ordered a taco piñata on etsy (proving you really can find everything on etsy) and then my husband found one at Target too. We used the etsy one that was indoor friendly (with little pull tabs) as our actual piñata and the Target one as a table centerpiece.

I also ordered some “fire” for photos since if dragons eat tacos (which they love!) with spicy salsa, well, it doesn’t end well, as modeled by big brother Milo above. 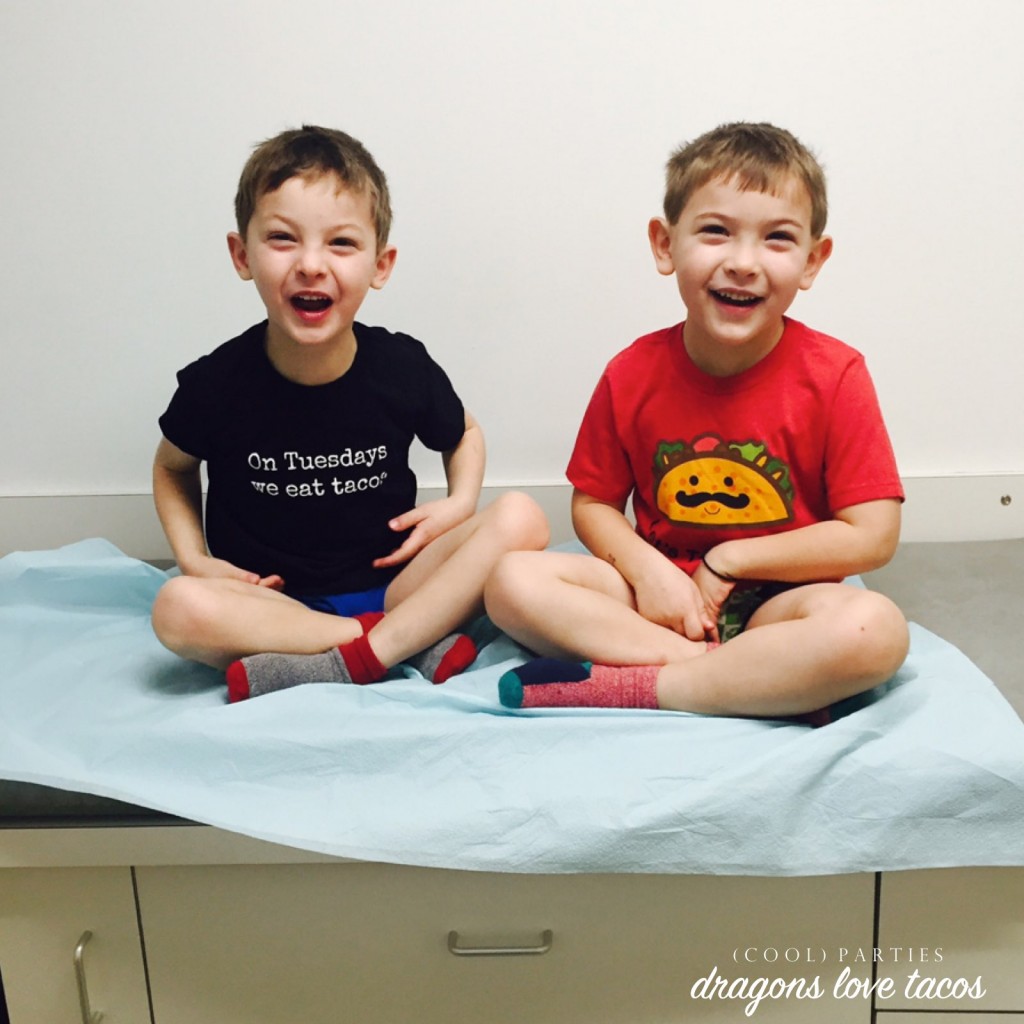 It was a really fun day. And, yes, I might have gone a little overboard with taco tee shirts for the boys (seen here at a later date): On Tuesdays We Eat Tacos and Let’s Taco ‘bout It. But who can resist a taco tee! 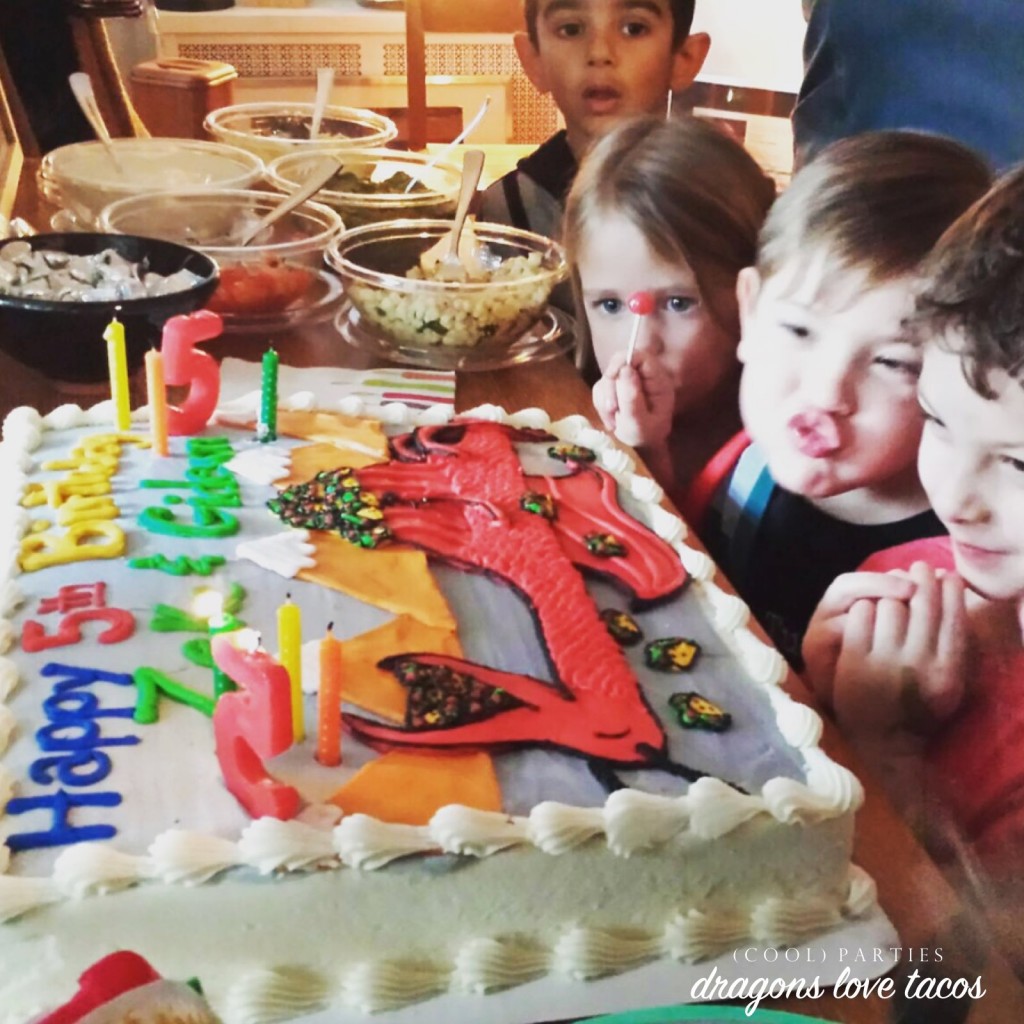 I think this party proves, if you love it, you can party around it!

Next post how to talk to tweens about social media 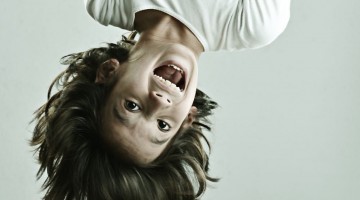 (cool) progeny family playdate: ripley’s believe it or not