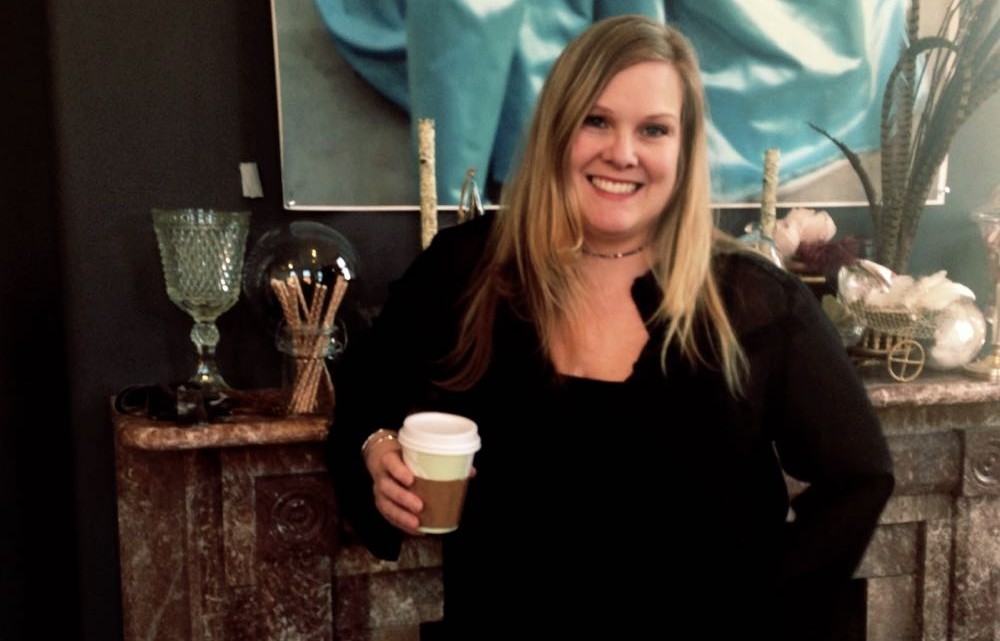 Wait, what? More on that later.

The second you walk into Jill Andrews’ studio—at the corner of Keswick and 38th Street—the more you understand why brides instantly fall in love. It’s magical in there. The hum of the sewing machines, the natural light pouring through the windows, the work station that has a handmade bodice—the start of a wedding dress—that is in the palest pale most stunning pink color. It’s the place of dreams. The place where brides walk in either knowing exactly how they want to look or not a clue and Jill and her amazing team create a dress, a memory, a keepsake.

She’ll see a woman walking around Hampden—where she works and lives—now pushing a stroller and think to herself, “I made her wedding dress. There’s this whole new generation. I made their mama’s dresses. It’s intrinsic.”

How could I not meet her at Jill Andrews Gowns? So I come in precariously balancing three cups of coffee on a cold, blowy day. (Ma Petite Shoes Café – delicious coffee, in need of drink carriers.) And Jill talks and laughs. (She has the best laugh.) Motherhood, wedding dresses, and Ebola. 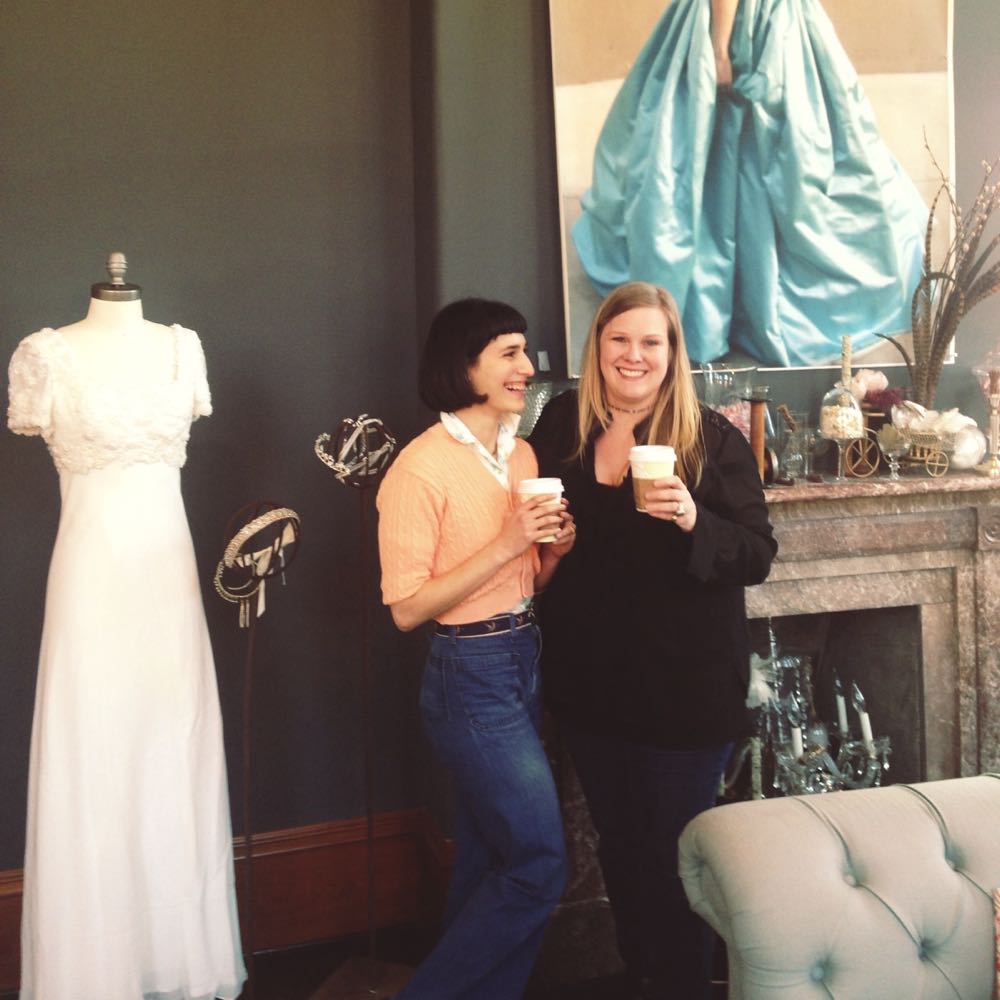 jill andrews, from center stage to johns hopkins & everything in between

“Do you have Ebola this weekend,” asks her 8-year old son Roland. This was after Jill’s friend told her to apply for the Johns Hopkins design challenge in her “copious spare time. LOL. HA HA HA.” They were looking for people to help create a better/safer suit to protect caregivers in the war against Ebola. She was selected. And knocked it out of the park.

A dressmaker at Hopkins? It actually makes perfect sense.

After spending 14 years making costumes at Center Stage, she left to start her own business in July 2009. Jill had a zip-loc bag full of change in the trunk of her car. They—Jill and her business partner—dumped the money into one of those Coinstar machines. It was $50. The start of their “business fund.” They bought a wi-fi card at Starbucks (remember those!?) and bought The Complete Idiot’s Guide to Business Plans

. They moved into their castle building that August and were open by November. 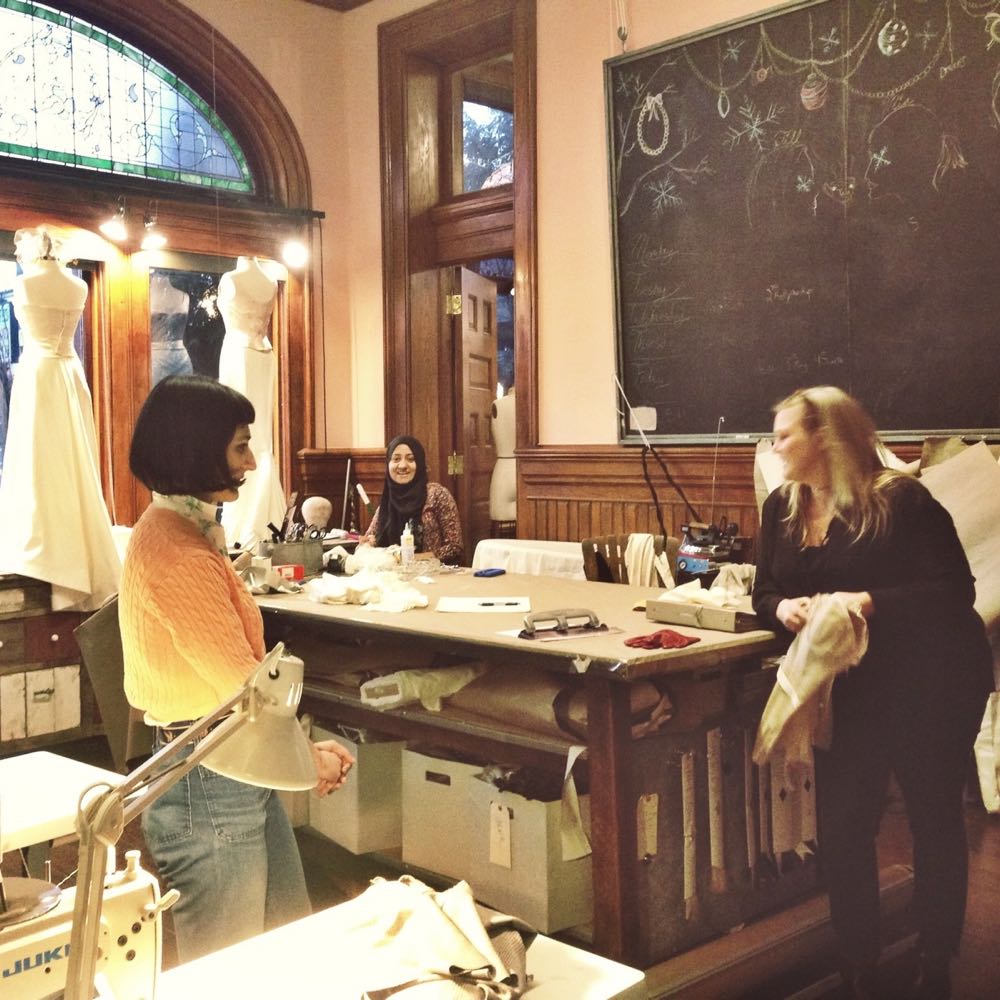 Since then, she has created hundreds of wedding dresses.

She had been following along—with everyone else—the horrific news. Her 10-year-old daughter Jules’ godmother was born in Liberia, one of the heaviest hit areas. Jill read the email forwarded by the friend that discussed the Ebola suit design challenge, organized by global health nonprofit Jhpiego and JHU, and immediately thought: this is so cool. She followed the directions and applied.

“I knew I could help,” she says. “A bunch of scientists making a suit?! I know how the body works, how it fits. And I was really interested to see what Hopkins would do. How they viewed the outside world.”

The very first day, she sucked down as much information as she could — and was up for the challenge. There were 60-some people total – from public health workers to engineers to virus experts and one seamstress – broken down into eight teams. Everyone wanted Jill.

“I was the only one that could really sew, could really pattern. Take a concept and take it to the next level,” she says modestly. She happily contributed to each team over the three days. {{Her team was like: hey, we need her back!}} It was an intense process.

“It was about solving a problem. It never stopped turning over in my mind. And how can I help this, how can I make this better. How can we solve this problem? How do we get these people out of this suit without contamination? It was part of my dreams. Part of my waking thoughts during the day.”

It’s called solution landscaping. Identify your problems and creating different solutions. All those years of costume design and dressmaking were immensely beneficial; Jill was able to create rapid prototyping so they could see it immediately.

Currently a few things are being perfected on the super suit. There’s a “zipper thing” Jill told me carefully. “They want me to do another prototype for a different part . . . for the applied physics lab.”

The last Jill saw of the big prototype? It was “being Ubered over to White House to meet the Ebola czar.” Jill’s team had won the USAID grant. The president had asked if he could keep the prototype for this presidential library.

“It has a Jill Andrews Gowns label in it,” she says proudly. 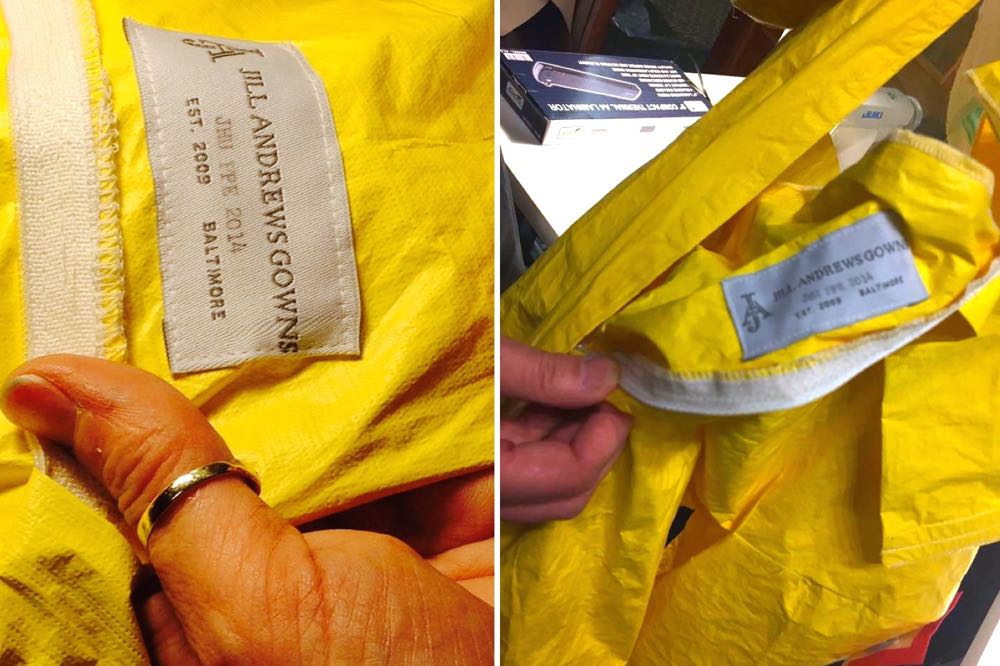 Which is appropriate because there was some crossover between her two worlds. “It’s like osmosis. It’s free flowing,” she says, using her sewing and designing techniques to help solve problems on the Ebola suit, like using gusseting around the neck.

“I don’t really use a lot of Ebola technique on my wedding gowns,” she laughs. “But I do have a big roll of Tyvek in the back and I keep thinking, ‘Boy, that would make a really cute circle skirt.’”

Previous Article where to play this weekend