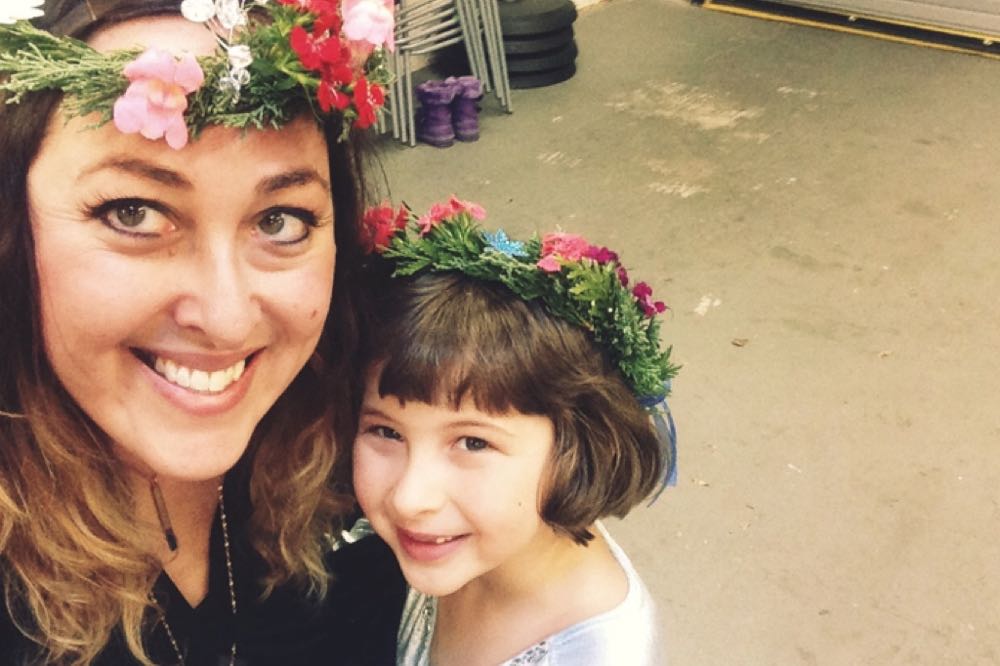 Winter birthdays are hard. There is always that threat of snow or ice (as a February baby myself, I’m use to the HUGE disappointment of many a snowed-out party at Skate Haven, but I digress…). There is also that nagging question every year: where to have the party. There are no tot lot or pool party options. No park pavilions. As a mom to not one, not two, but three winter babies, every year we wonder what to do? (Other parties in the past: a triple superhero party at Charm City Kids Club, a circus theme at Coppermine at DuBurns Arena, a numbers and letters party at home, and a lunch at American Girl in Tyson’s Corner.)

Willa—who was turning six—desperately wanted a Frozen party (she can’t seem to Let It Go.) But I really wanted to think outside the box and do something a little different for Willa and her 11 friends. Around that time an e-mail arrived from Local Color Flowers—a local floral design company with an amazing mission: only sourcing locally grown flowers. They are always hosting great workshops; I had attended one of their floral crown classes before and knew the girls would love that. I e-mailed the owner and asked if we could do something along the same vein – but for the six and under crowd. Ellen was really excited at the idea and a plan was hatched to host Willa’s January birthday at their Charles Village studio. 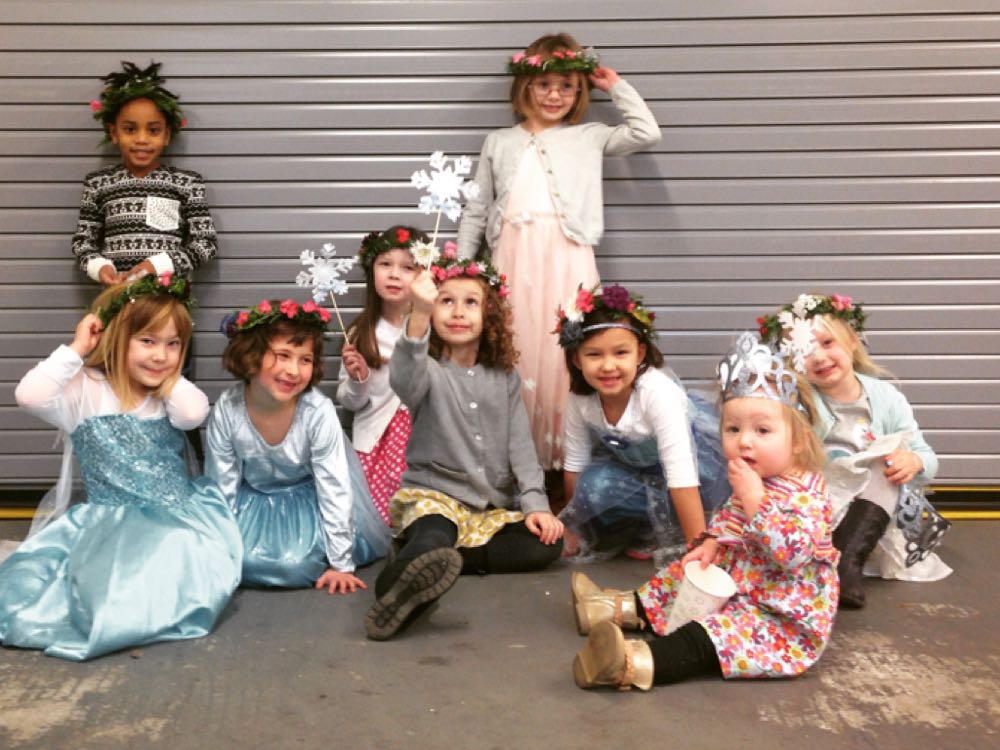 First we found these adorable Frozen-esque invitations on Tiny Prints. 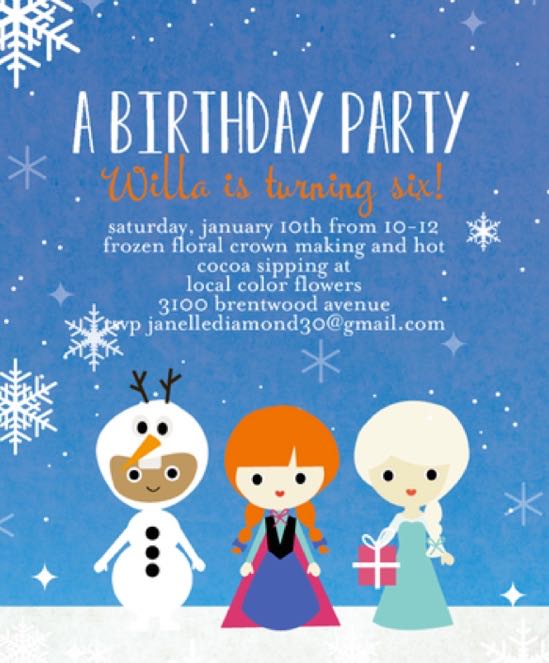 And I loved these pencils from DesignGem. Each girl got to pick her favorite saying. 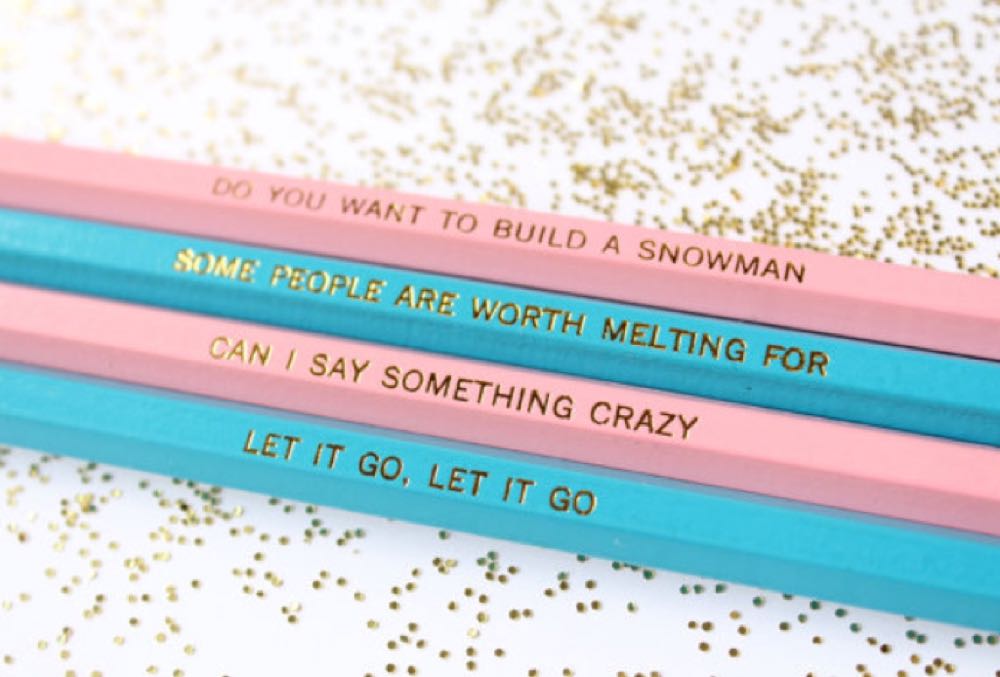 Because so many etsy shops close or get bogged down around the holidays, I proactively searched for Frozen party items extra early. I loved Confetti Momma’s items and she had them to me within just a few days. All the items were high quality and super cute. I ordered Elsa crowns, snowflake wands, Sven antlers, and Olaf carrot noses. For days, my little boys walked around with Olaf noses asking for warm hugs. 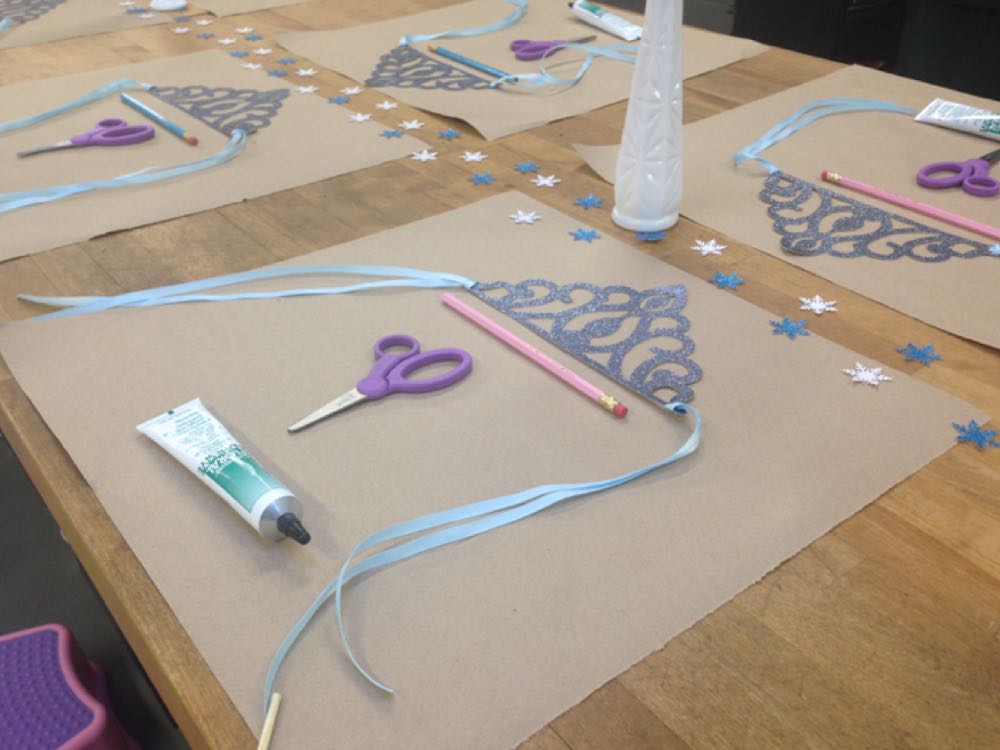 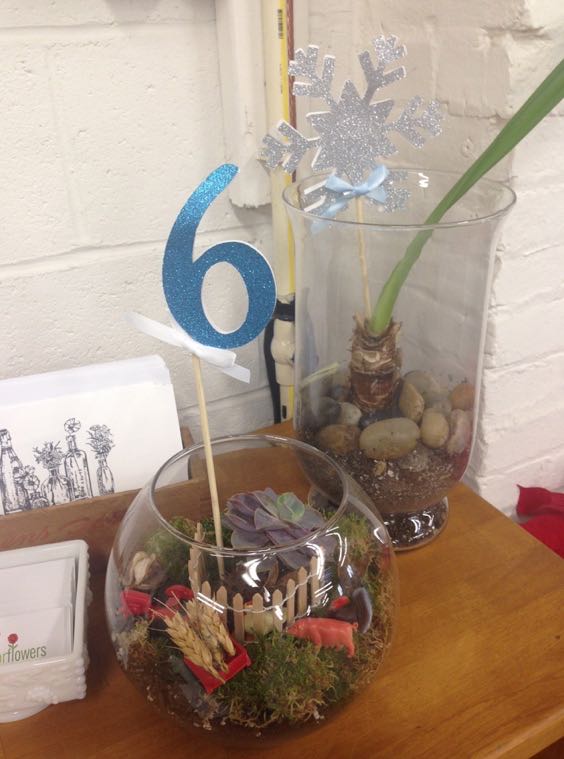 We then started thinking about a menu. The party was from 10-12, so we were kind of between breakfast and lunch. We decided on a hot chocolate bar with oodles of toppings, cupcakes (in lieu of a cake), and a few other little snacks. I decided to make the hot chocolate in crockpots. I found a recipe that seemed a step-up from my usual water and cocoa powder. This one involved chocolate chips, condensed milk, heavy whipping cream… you get the point. 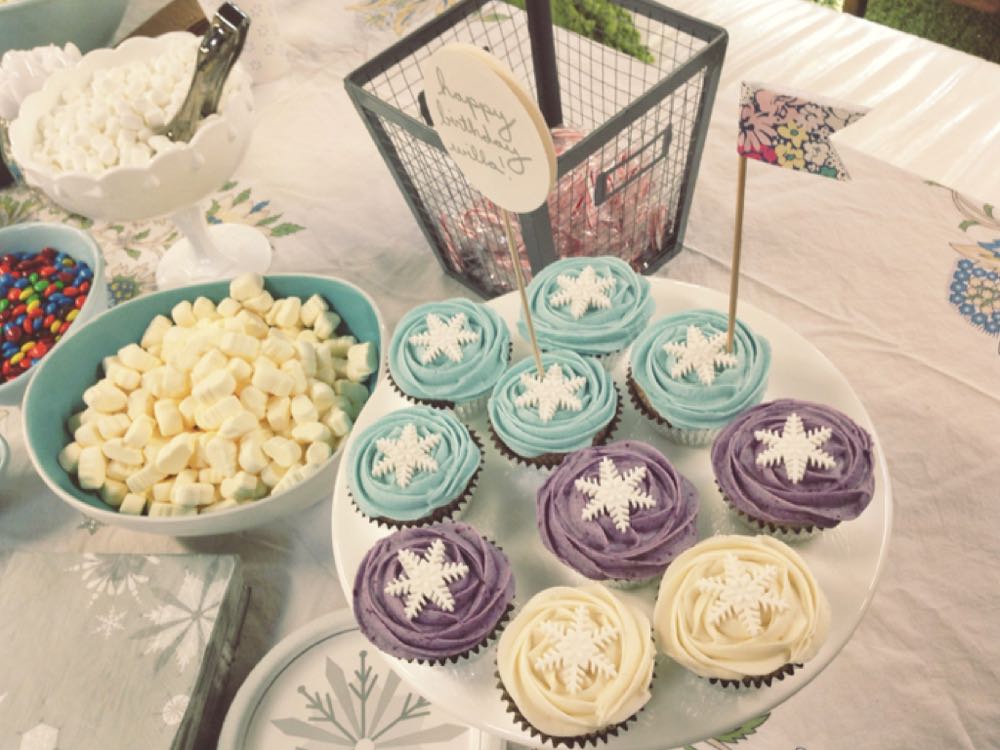 I had found some adorable snowflake plates at Target (around the holidays) and snatched those up – but I didn’t love any of the hot beverage cups. Plus, I figured the girls would be putting them down and misplacing who’s was whose. Then I had an idea: buy mugs the girls could decorate when they arrived. The little boys and I hit up Ikea where I found 11 white mugs and one special blue mug for the birthday girl. I bought special pens at Michael’s –oil based—and had a ton of Frozen stickers I found at Target. When each girl came in (and the birthday girl’s big brother), they got to decorate their mug before filling it with hot chocolate. Added bonus? I love favors that have an actual purpose other than taking up space in my house. 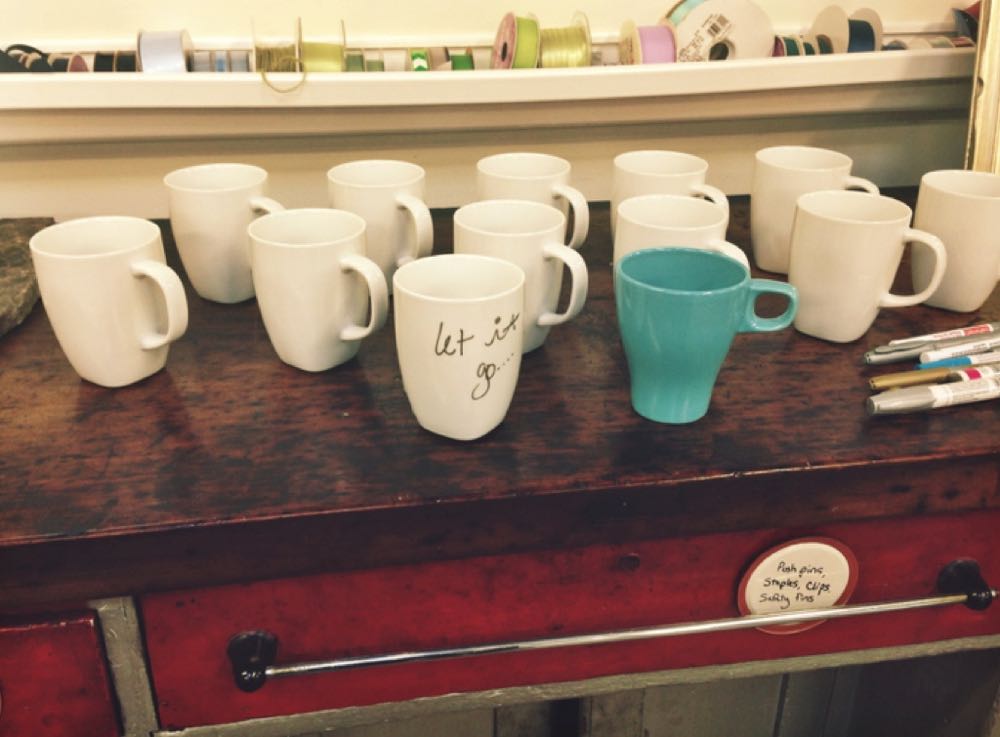 The hot chocolate bar was super fun to shop for – and Carling and Irene did an amazing job setting it up. I found sprinkles in various shades of blue, silver and white snowflake shaped sprinkles, white and chocolate chips, whip cream, cherries, mini marshmallows, mini candy canes (bought on super sale – thank you Christmas!), and my favorite: snowman-shaped marshmallows. (Admittedly ordered via Amazon after a local hunt turned up nothing. My husband calls me nutty; I say I’m driven.) I overbought on the toppings – as one tends to do. So far we’ve also used them to top popcorn for a classroom celebration and ice cream sundaes on her actual birthday. Pretty sure they’ll be making an appearance at her brothers’ birthday, too. 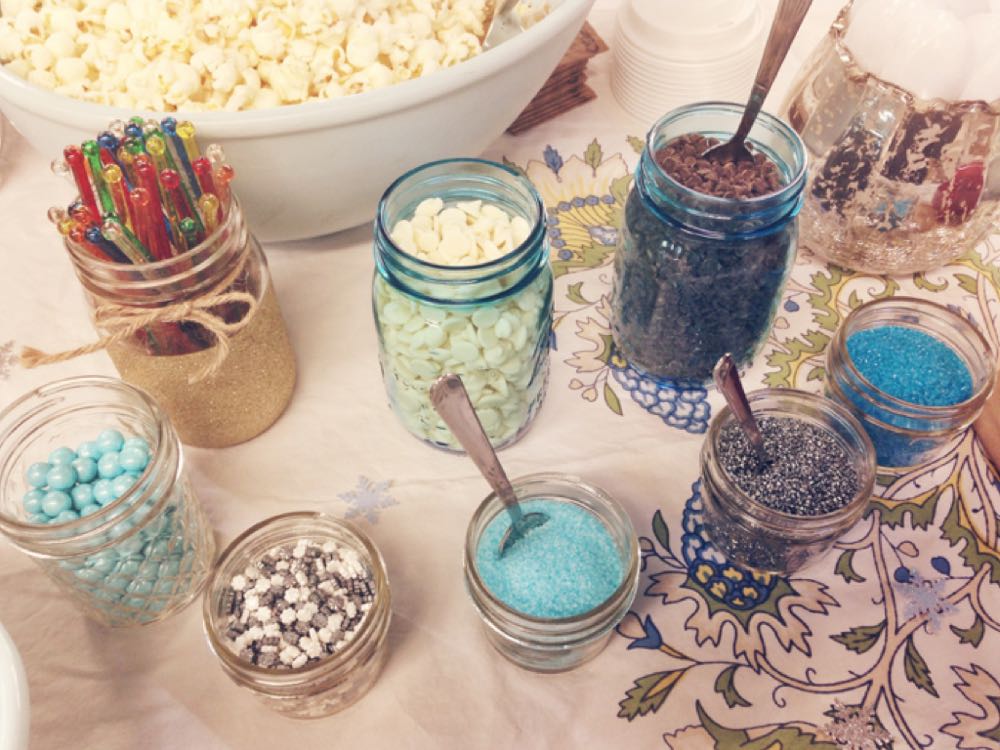 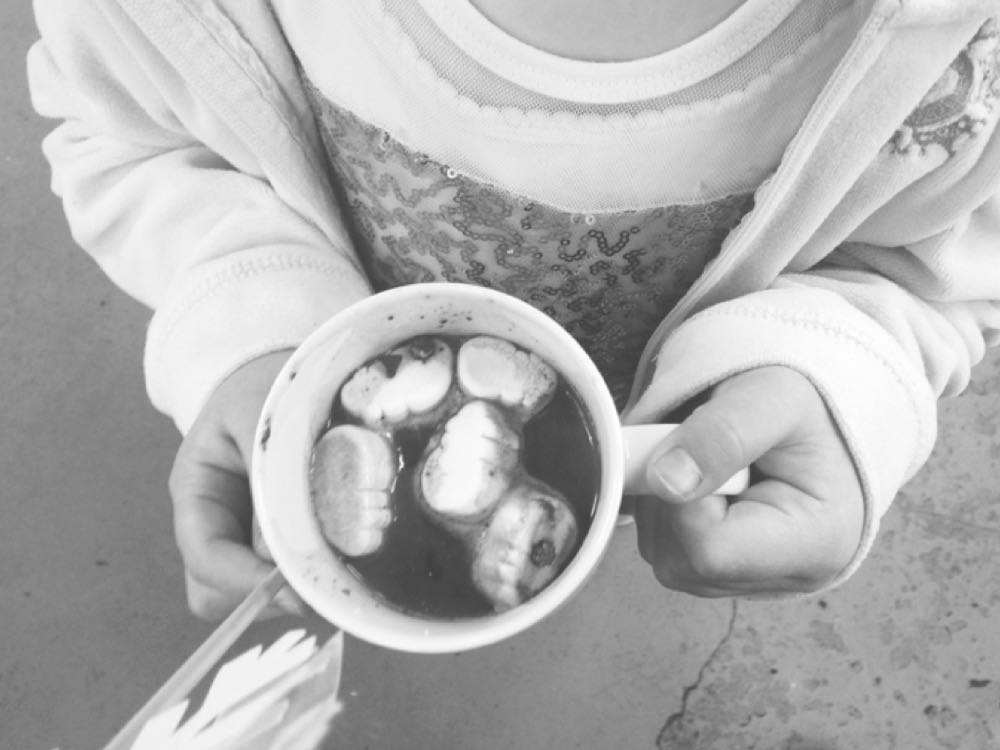 The music aspect was easy. We had the Frozen soundtrack on repeat until my husband had enough and switched it to the Frozen station on Pandora (and then to anything not related to Frozen) and then back again for one final belt-it-out-they-al-know-the-words rendition of Let It Go. 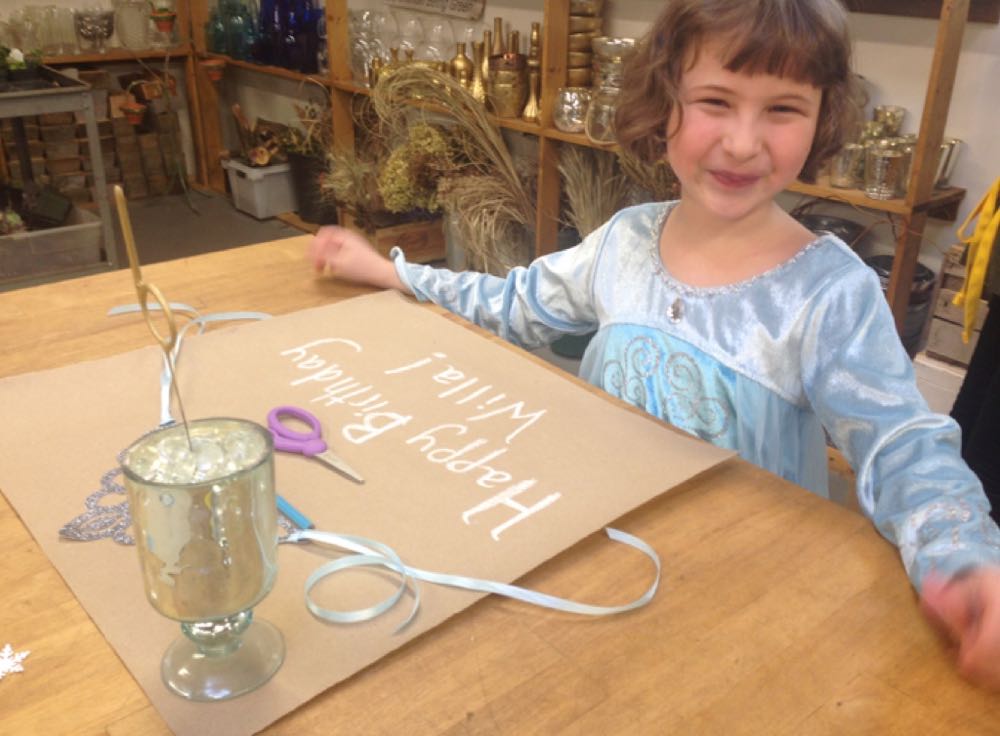 The highlight of the party was the floral crowns. Carling and Irene had pre-made the “base” of the crown and had the table all set up (along with pink stools so they could reach the tabletop). The girls were able to choose from locally grown mums, sweet William, snapdragons, and evergreens to glue on, along with ribbons and snowflakes. The girls were in heaven. They truly loved wearing something they had created. 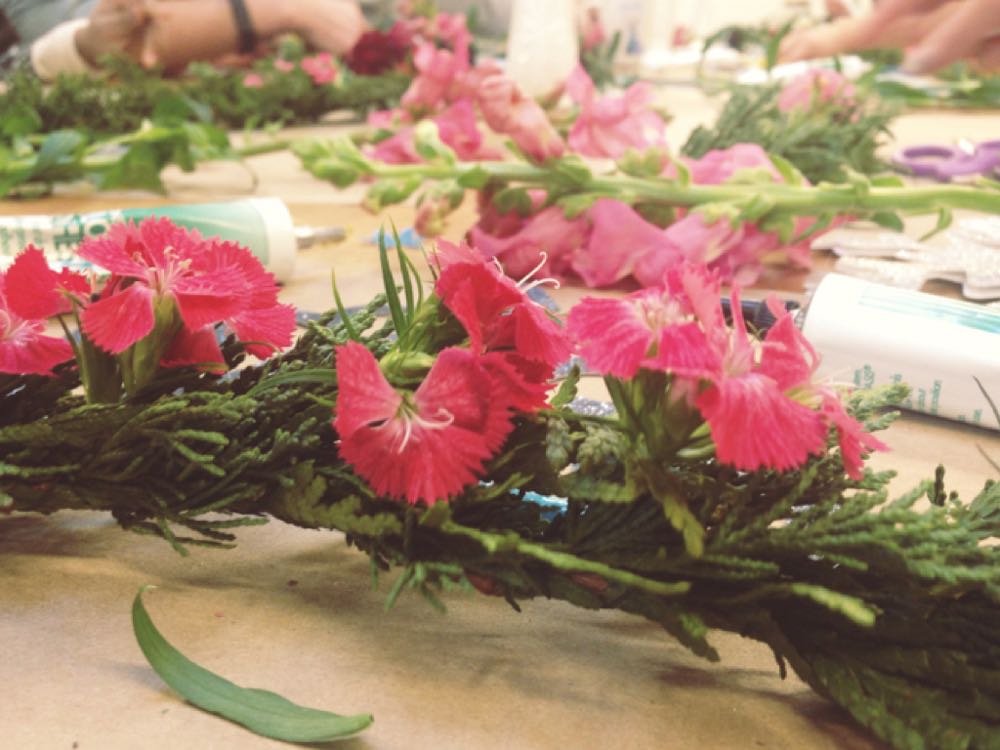 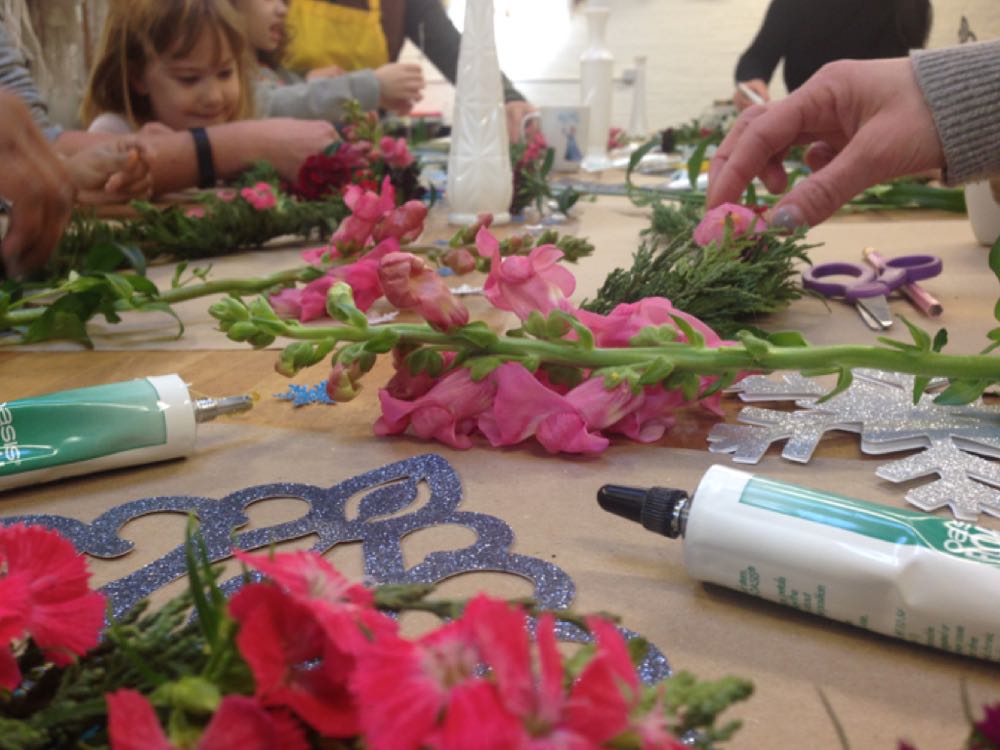 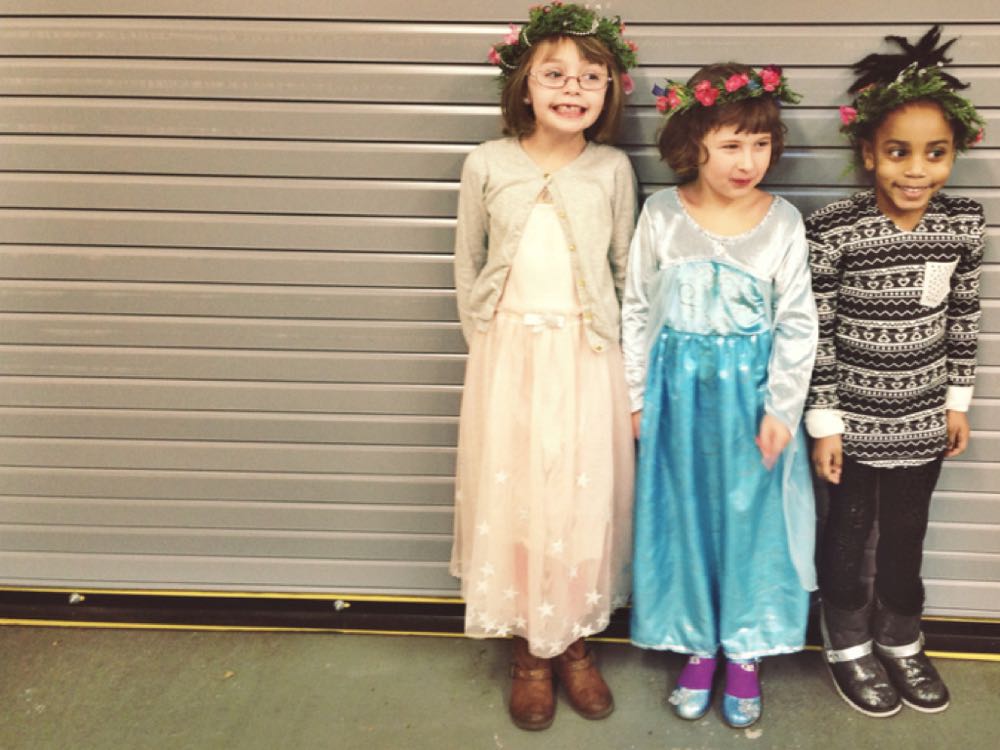 Another favorite part of the party was the cupcakes. Made from one of my favorite local bakers Carrot + Cream … she’s crazy talented! And the flavors! I couldn’t choose what I wanted so I ordered three dozen. Vanilla cake with blueberry icing and pistachio cake with vanilla icing for the kids, and a vanilla cupcake with a blackberry jam center and bourbon icing for the adults. I don’t even want to know how long it took Kerry to make each snowflake! 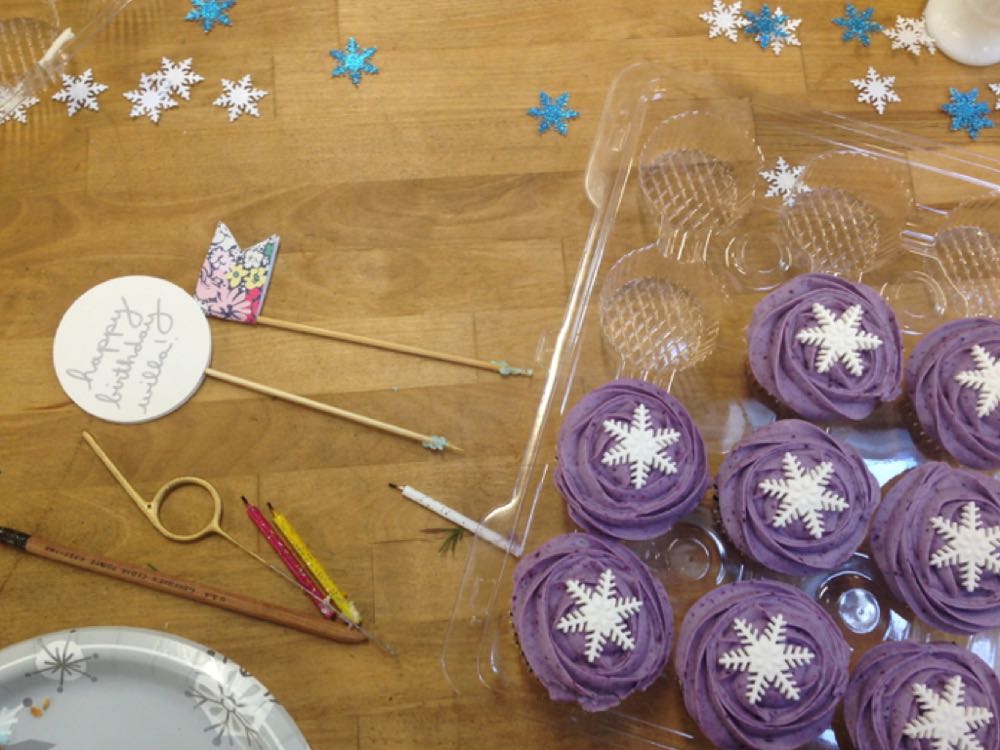 {{Cupcakes also taste delicious for breakfast the next morning.}} 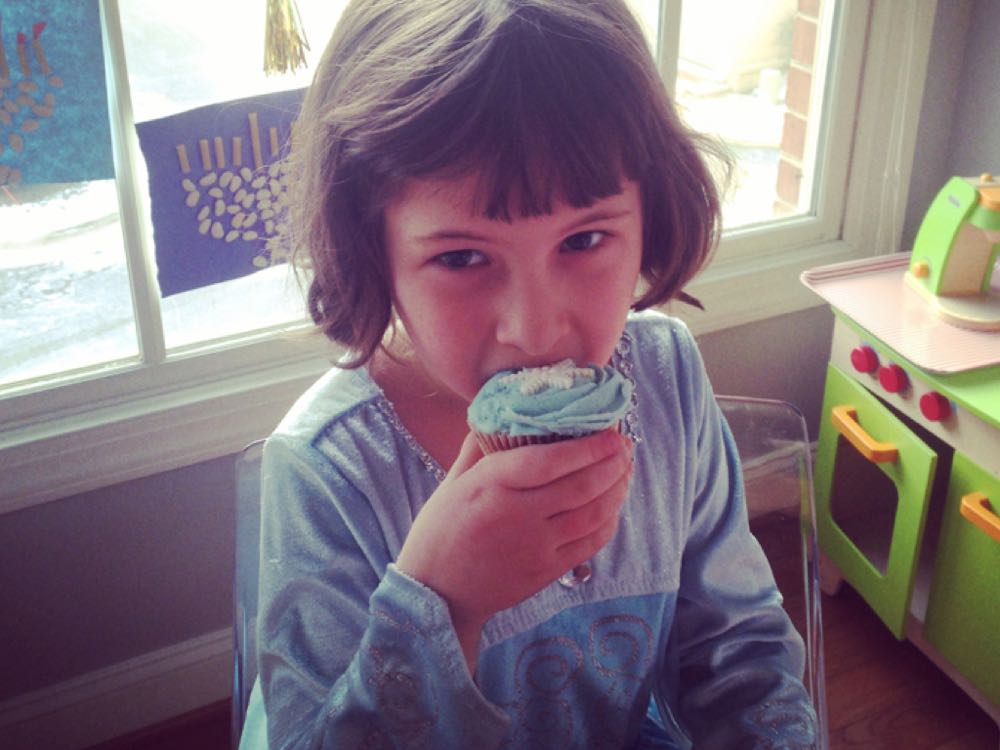 All these details – and the fact that Carling and Irene were so professional and did all the set-up—made this Frozen Floral Crown Birthday Party my favorite party we’ve ever hosted. Anna and Elsa sent a Frozen tundra the day of Willa’s party (but no snow, thank goodness!) and we were able to utilize some incredible local businesses and etsy shops to create a day neither of us will forget! 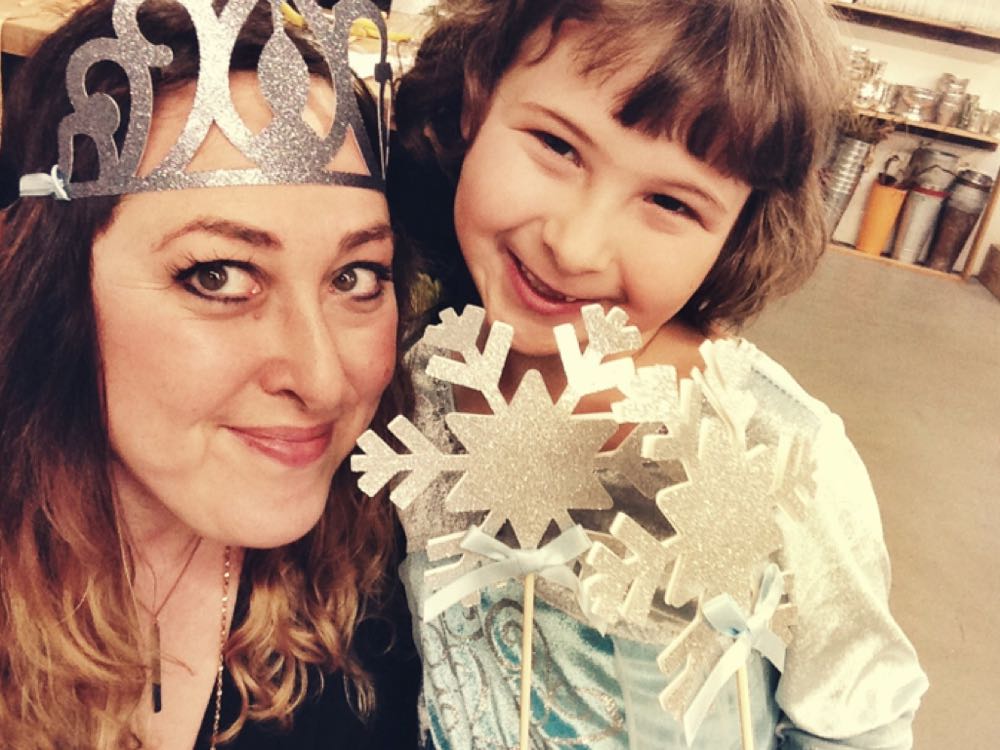 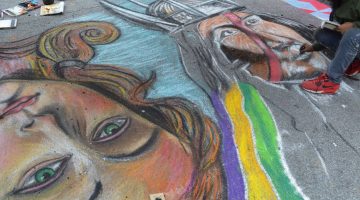 things to do with kids in baltimore this week