reading with kids, harry potter edition: do you have to be 11 before you get into hogwarts? 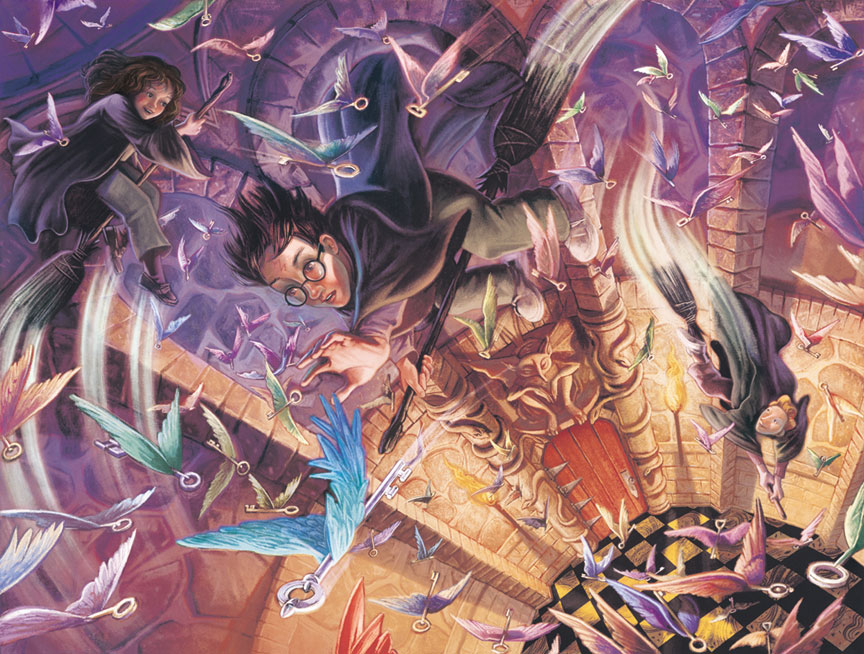 Considering introducing your child(ren) to the rich, magical, exquisitely word-filled world of J.K. Rowling’s Harry Potter? Then you’ve undoubtedly struggled with the question of how early is too early for Harry?  If only Professor Slughorn could brew us up some Felix Felicis to help get us through this parenting gig! In lieu of a “liquid luck” potion, perhaps a little insight from a self-proclaimed muggle-born who’s Hogwarts letter must have been dropped by a careless owl, could be of use.

I first arrived at number 4 Privet Drive Little Whinging, Surrey in the winter of 1999.  No more than a chapter into Harry Potter and the Sorcerer’s Stone, I’d already become enamored of this magical world. I so longed to share it with my then five-year-old son. I realized by the end of the book that 5  years old may be a little young to start a child on a book that opened with the murder of an infant’s parents.

“The truth. It is a beautiful and terrible thing, and should therefore be treated with great caution” ~Albus Percival Wulfric Brian Dumbledore

The truth was that though I wanted him to know Harry, he wasn’t ready and neither was I.  I waited until his 11th birthday; after all that is when your Hogwarts letter comes.

You see no matter how much one adores Harry, there are just some things that the littlest of muggles aren’t equipped to understand without help. So how do you help ready your child to enter Hogwarts? Here are some ways I choose to prepare my next three children to follow their big brother into Gryffindor house (naturally):

read the books yourself
You may think seeing the movies has given you all the insight you need, but the books are better and FAR more detailed. Reading the books will allow you to prepare for questions ahead of time. (After all, you know your kiddo best and will innately know some of the things they’ll ask!).

talk it out first
Some of the topics in the series you have likely already started to cover with kids as young as five or six; things like rule breaking, kindness, cruelty, friendship, and doing the right thing. Others you may want to discuss include: loss, bigotry, fear, and bullying.

join the pottermore community
This is a website set up by the Rowling team that allows you to explore Harry’s world through games and interactive vignettes that reveal spinets and surprises. The site can help you explore at a pace that is comfortable for you but still engages your kiddo. Pottermore also has several impressive online safety measures like aut0-assigned user names that have nothing to do with you or your child’s actual identity. This is also where J.K. leaks the best of her secrets, new content, and fun information.

consider starting with the tales of beedle the bard
The Tales of Beedle the Bard is book of children’s stories in the vein of Aesop’s Fables – – stories with a moral to them – – the tales play a key role in the last book, Harry Potter and the Deathly Hallows

. The introduction in the book serves as a great guide to making the connection between tales our children have grown up with, and the world of Harry Potter. Since it is essentially a book for younger kids, it is a good place to start them off.

watch the movies together
As with reading the books, you’ll need to make your own call as to whether your child is ready for this or not. I have four children with 5, 10, and 11 years between the oldest and the youngest. The youngest two started early with the movies because their older siblings and I loved Harry  — and because our youngest son has a scar on his forehead and wears glasses (so Harry!). For them I prepared a list of questions to ask after the movie. They were geared to cover areas that may have concerned them and served as a tool for having a conversation about the very grown up issues Harry and his friends face.

I’m currently reading Harry Potter and the Prisoner of Azkaban

to my nine and seven-year-old children.

In the end, you hold the Hogwarts Letter in your hands and only you can decide when to send the owl.

Harry Potter Halloween is BACK at Johnny’s!