the sun will come out tomorrow: charm city players brings Annie to life 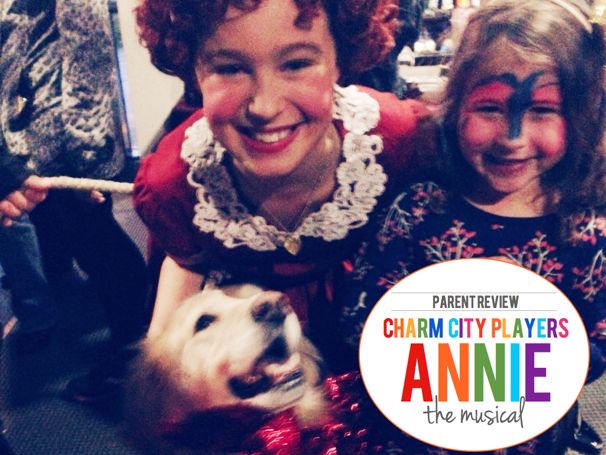 If I’m going to be completely honest in this review, I will say first and foremost, I wanted to go see Annie. And I figured I should bring my kids too. (I first saw Annie around 1981 at the Kennedy Center when I was about five years old—one of my first clear memories and it kicked off my lifelong love of theater.) I was so excited when I saw Charm City Players—a relatively new theatre company—was staging it.

Charm City Players has taken over the Hannah More Arts Center at the (amazing) St. Timothy’s School on Greenspring Avenue–former home of Pumpkin Theatre. The show runs (almost) every Saturday and Sunday between now and January 26th.

Starting about an hour before the show, some of the older “orphans” were face painting in the lobby. My daughter got such a kick out of seeing her face painter on stage later.

The theater is the perfect size–not a bad seat in the house and kids are allowed to be kids (there was lots of snacking, parents taking kids for bathroom breaks, and questions, at least from my kids. My favorite was when my seven-year old asked me during the middle of the first act, “How much longer? I don’t really care, I’m just wondering.) That being said, the show does tend on the longer side. The two acts, plus a pretty long intermission (which was good because the bathroom is tiny), equals about three hours, and that doesn’t include getting there early for face painting. My almost five year old and seven year old got a little fidgety toward the end when we were out of snacks, but we made it to the finale. 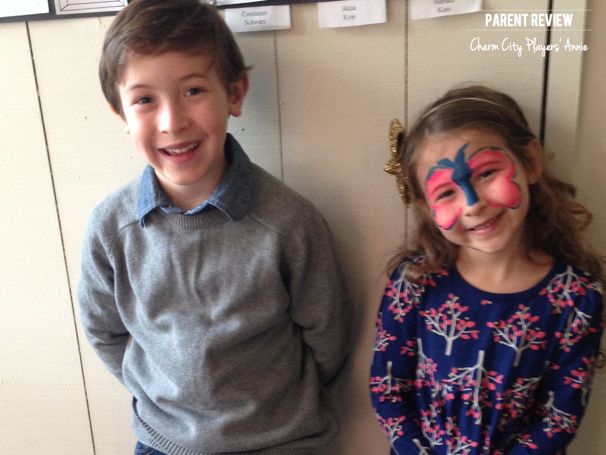 The sets and costumes are top-notch, with a live orchestra and a real dog! (Sandy was very well-behaved during the show we saw.)

The entire ensemble was great. The fifth grader who plays Annie has a strong and wonderful voice and holds her own even when singing with the adults. One of my favorites was the little girl who plays Molly. She was a scene stealer and one of those kids that just “has it.” Daddy Warbucks and Miss. Hannigan were also fantastic—as was FDR. Really, the entire cast was.

And speaking of Miss. Hannigan, I will say, now as a parent of four kiddos seven and under, I had a new understanding for her plight. Just sayin’.

After the play the entire cast comes out—including Sandy the dog—and it was a lot of fun for a star struck kid to have her photo with Annie and Grace Farrell.

I downloaded the album as soon as we got back in the car and we belted out “Tomorrow” the entire way home.

Tickets are $15 each and the show is recommended for ages three and up. Performances are weekends through the end of January 2014. Please visit the Charm City Players website for exact performance dates and times.
Tags: charm city playerskids theatre

Next post kid-friendly side dishes: fun twists on seasonal favorites!

Things to Do with Kids in Baltimore this Week: October 16-20