are you my mummy? 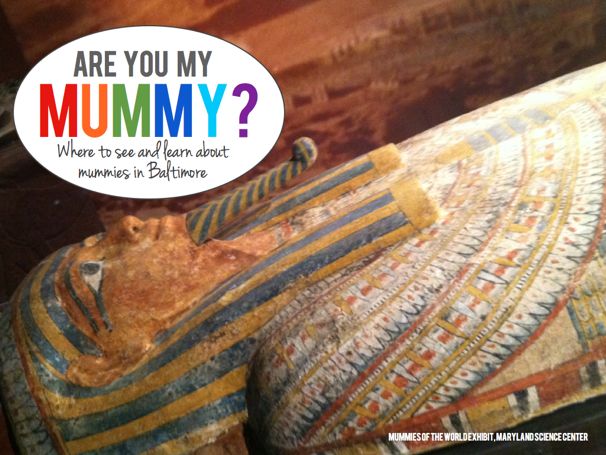 What makes mummies so fascinating? Imagination? The Unknown? The stories they hold? The science, art, sociology and culture literally wrapped up with them?

Seems that kids and adults are captivated with the world of mummies — full of wonder and a certain amount of creep factor. With Halloween just around the corner, I’ve scared up some of the best places in town for getting up close and personal with Mummies.

Mummies of the World exhibit opened locally this month, taking up residence at the Maryland Science Center until January 2014. This is the largest exhibition of  mummies and related artifacts ever assembled. It boasts 150 never-before-seen items and specimens, including real human and animal mummies from South America, Europe, Asia, and of course, Egypt.

Though a very impressive display, both educational and awe-inspiring, the exhibit may not be good for smaller children. I personally found some of the pieces (including a small child) disturbing. The space the collection is housed in is very dark as well. That said, this is a world-class exhibition. It focuses a on how science can shed light on history and cultures around the world, and would be great for home-schooling families and older children. (recommended for ages 10 and above)

The Book of the Faiyum exhibition at The Walter’s Art Museum takes you on a an illustrated journey, though ancient papyrus that lets the story of  Egypt’s Faiyum oasis, a center of prosperity and ritual during the Greco-Roman period.  Displayed alongside Egyptian statues,  jewelry, and ritual objects, the tale of Sobek, the crocodile god, comes to life. (The display is of course “hands off,” so you’ll want your kiddo to know it’s a ‘keep-your-hands-in-your-pocket’ room; however, the Walters is ultra-kid friendly and has drop-in Egyptian art crafts every weekend, all month long! Don’t miss their FREE Egyptian Family Festival on October 26th!)

The Egyptian Gallery inside the Odditorium at Ripely’s Believe it Or Not! is a “portal” into ancient Egypt. Marvel at tomb beads, a scarab necklace, and more. Be sure to open doors, push buttons and look inside things for even more excitement.  There are a few items in this space that might be a little unnerving for some, but it’s easy to just move on to the next weird or amazing object. (recommended for all ages, though Mummy -or daddy- may want to keep an eye out for potentially scary stuff)

Get ready for an adventure that Lord Carnarvon himself would love. Travel back to 1920’s Egypt on an Adventure Expedition to fun at Port Discovery Children’s Museum. Pull yourself across the Nile on a wooden raft, solve hieroglyphic puzzles and find your way Pharaoh’s lost tomb! This is also a darkened exhibit, you might want to take this into consideration if you have smaller kiddos. (recommended for all ages, though maybe not for those who are wary of the dark)

With the mummies in town, we’d best keep our eyes peeled for Frankenstein and the Wolfman too, eh? 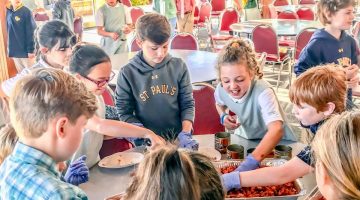