letting kids win (or not) 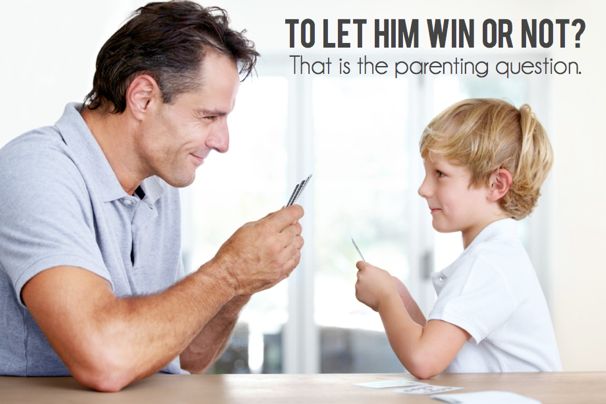 The holidays are over. The trappings and trimmings have been put away. 2012 is a distant memory. The only evidence that remains of our season of eating and giving are those few extra holiday pounds, the gifts that we received and those few errant pine needles left on the living room rug. If you’re like my family, then some of the games that were received for the holidays have made their way into regular play time. Spot It! Uno Roboto. Sorry. They’re all in the rotation.

Whatever games we’re playing with kids (no matter if we’re racing them or trying to outwit them at chess), we inevitably come to a point in their young lives where we have to decide whether we’re going to tilt the game a little in their favor.

Pick up an extra (and unnecessary) card in Crazy 8’s. Run a little slower. Pick up the wrong tile in Memory. Knock the Jenga tower over on purpose!

There are plenty of ways that we can work to increase the odds in their favor, but under what circumstances should we let kids win?

Games are great for building certain skills in kids. They can exercise the body and the mind. They can help increase coordination, memory, number sense and social skills. When kids are just learning games or are just learning the skills necessary to play those games, it’s a good time for adults to play dumb. Giving kids extra time to figure things out is a great way for them to get comfortable with new games and skills.

Game playing can also be a useful tool for helping kids build confidence in themselves. Besides the fact that winning feels good, it can also help us believe that we’re capable of adding or remembering or identifying colors. Winning at Candyland is mostly about luck, but being able to match colors or count spaces are little bits of success that can generate feelings of self-confidence in kids. Sometimes just winning at a game of luck can really boost our spirits. And when we win games that take more skill, our positive feelings about ourselves increase. I like playing Bananagrams because I think I’m good at it and I feel my ego inflate a little bit after I win. I’m a crossword monster!

When is it not a good idea to let kids win? All (or almost all) of the time…

If we’re allowing kids to win most every time we play a game with them, then we’re robbing them of a profound life experience: losing. While winning makes us feel good and can help build confidence, nothing builds feelings of capability like not giving up after you lose at something. In the grand scheme of things, we’ll all probably fail or lose more often than we’ll “win” in life. We should probably start figuring out what to do if we do lose at an early age so that we won’t be surprised by it when we’re older.

Other kids are also a good antidote to letting a child win a lot. When kids play with each other, nobody goes easy on anybody else. They all play to win. If we’re not readying our kids for this, we’re doing them a disservice.

So maybe don’t play Trivial Pursuit with them just yet if you’re not prepared to throw the game a little, but feel free to swing away when playing Chutes and Ladders. Just think about evening the score a bit so that your kids aren’t always the ones on the winning side. And of course, win, lose or draw, a friendly hi five at the end of any game helps us to remember that winning and losing isn’t everything. Sometimes it really is just about playing the game. Have fun!