every 'mis'behavior has a purpose

Children exhibit many different behaviors on any given day. All of these behaviors have reasons behind them. It’s very easy to react to these, especially if they are negative behaviors. All of them can, at some time, make parents feel angry, annoyed or at the end of their rope. While these emotions are perfectly natural and will happen many times when dealing with kids, sometimes it helps to try and identify the reason behind the behavior.

Here’s the good news: Kids are almost never misbehaving simply because they want to be bad. It can so often seem that they are being defiant just to make us mad. They, like us, are trying to achieve something with their behavior. So, what could they be trying to achieve with a cry or a smack? Let’s come up with some reasons for MISbehaviors.

DIFFERENT GOALS– You’ve called your 9 year old inside for dinner, but they keep playing with the neighbors in the backyard. Your goal is to have everyone sitting down for dinner at the same time, with relatively hot food to eat. Your child’s goal most likely has nothing to do with dinner. Their goal might be to catch another kid in tag or to stay outside until it gets dark or just to have more fun! Whatever the reason, your goals are not the same. The 16 year old who changes clothes before going to school also has different goals from her parents. They want her to present herself a certain way and she wants to express herself differently. These differing goals can lead to strife between parents and child.

ATTENTION- While you clean the kitchen, your 5 year old dances around you, wanting to play, do puzzles, sing songs, help. Sounds to me like he is asking for that wonderful elixir…Attention! There are many “misbehaving” ways that kids seek adult attention: temper tantrums, whining, hitting siblings, yelling, crying, using naughty words, trying to be funny, getting out of bed, throwing food and so many more that parents face everyday.

CONTROL/POWER– When siblings play, there are often struggles for power or control: who gets to decide the rules, who gets what toy, etc. For the 8 year old who took a toy away from his younger sister, it sounds like he could be exerting his power over her by taking what he wants from her. Similarly, she could be trying to take some power back by hitting him in response. Mine!

REVENGE– Another reason that the 6 year old might hit her older brother is out of revenge. Fine! You hurt my feelings by taking my toy, I’ll hurt you with a smack. Parents can often be the targets of revenge too since they are often the rule setters and consequence enforcer, both relatively unpopular roles.

FRUSTRATION/INADEQUACY– Argh! For the 11 year old doing her homework, it’s safe to say that she’s feeling frustrated and that that’s why she yelled. Sometimes not complying with adult directives, in this case to do homework, isn’t a result of being defiant. It might be feelings of inadequacy or frustration.

PHYSICAL DISCOMFORT– For the 3 month old and the 3 year old, who both are most likely hungry, their “negative” behaviors are a result of this physical feeling rather than just their desire to be annoying. With babies, we expect their behaviors to mean something, but sometimes as children get older, we forget that their cries and fusses and yells mean something too.

So while it’s never easy to hold that annoyance and knee jerk reaction in when kids seem to be purposely aggravating us, if you have the opportunity (and patience at that moment) to reflect on the reason for your child’s behavior, you just might have a different response to it. So let your inner child loose and revert to your 2 year old days by asking yourself, Why? Why are they acting this way? What is the purpose behind the behavior? 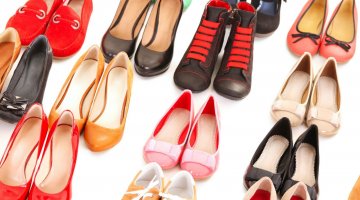 Got Shoes? A Local Creative Agency Wants Them (And Reason is Really Cool)