The National Aquarium in Baltimore wants visitors to more than just observe. They want them to encounter.

In a move to become more hands-on and patron friendly, you’ll see Aquarium staff interacting more with the public. Whether it be animal feedings, trainings, enrichment or play activities, visitors are going to have a chance to get in on the action. You can even try out binoculars.

The Bug and I had a chance to catch up with Aquarium staff and Charm City’s eight Atlantic Bottlenose dolphins at a media preview event last Friday. Despite being the youngest attendee there, the Bug asked the toughest question:

Unfortunately, the trainers weren’t too sure; however, the Bug insisted they would probably like Hakuna Matata if the staff would play it for them. They promised to give it a try. {Side note: we’ll follow-up with the Aquarium to see what the dolphins thought…}

In the meantime, you should swing by and say ‘hi.’ I’d say this was definitely “Bug-approved.”

(cool) tip: General admission prices to the Aquarium increased in order to cover TRIPLE the number of animal interactions available each day (only fair, and still a better deal then the previous general admission + dolphin show price!). Admission is now $29.95 for adults, $20.95 for children. Children under 3 are still free. A family membership to the Aquarium is just $159. Pays for itself in just 1.5 visits for a family of four. And we bet you’ll be back more than once. (Just saying…) 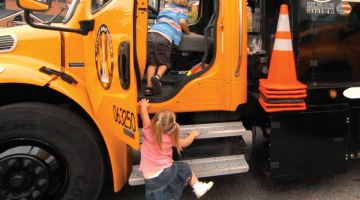