A few weeks ago, I had coffee with Janelle Diamond, Style Editor at Bride, Baltimore Magazine. When she let it slip that she was hosting a three ring circus to celebrate her twins turning one and daughter turning three, I knew this was the next party to feature as part of our Real Parties series! First of all, who doesn’t love a circus? Second of all, it was taking place at Du Burns Arena — a fun locale for a winter birthday soiree! {Especially one under the pint-sized top}.

Janelle joked that the theme came rather naturally to her: “Life with four kids under five? It’s a circus!”

How did she settle on DuBurns Arena? “They needed a big enough space for the kids to run around and burn off some Saturday evening energy.” said Janelle. “DuBurns is nothing fancy. But it can also act like a blank slate—you get to fill in the pieces.”

It definitely came to life for this party! Here are some of our favorite details:

The Invite:  Just love! Looks just like an old-school Barnum & Bailey ticket. They were ordered from Dizzy Design Studio (fab etsy find!) and each came in it’s own popcorn bag.

Cakes: Janelle ordered custom cake bunting from BooBahBlue so that Willa, Zeke and Gideon each had their own special cake. It also allowed for creative ordering—each cake looked the same on the outside but had a different flavor inside (chocolate, carrot cake, marble, etc) so everyone was happy.  The retro retro Three Ring Circus plates, napkins and cups were found on Amazon.

Food. The Diamonds rented a popcorn machine and hot dog roller from ABC Rental. It was a nice touch—and gave grandma and poppy a task for the party. They also served chips and real Coke (for the adults.) She ordered striped straws from Pretty Sweet Stuff for the drinks and to add to their circus primary colors.  Snacks (Swedish Fish, M&Ms, Jelly Beans) were served in plastic retro popcorn holders from Target. Hot Dog holders came from Oriental Trading Company.

Attire: Fun with tees! Zeke, Gideon and Willa each had tees with bowties and big brother Milo had a tie—and secret moustache– created by Oh Fiddlesticks (another Etsy find). Willa’s tutu was made locally by Hailey Harvey of Charm City Tutus and Accessories. Janelle just told her something circusy and she made a showstopper. The adorable lion hat that Zeke is wearing? An Ikea find.

Location/Entertainment. The best thing about Du Burns Arena is you get the field, too. They had lots of tunnels and soft balls for the kids to play with. But they also hired hoopers (Baltimore Hoop Love – – the ones from the Sunday Farmer’s Market) to come and play/entertain all their guests. They were great. Juggling, holding contests, and showing off their mad skills.

Nostalgia. Janelle bought frames from Ikea and put pictures in from the past few years with some written commentary. Amazing to see how much the boys had changed since they were 5ish pound babes last winter.

Favors. They simply tied clown noses and boxes of animal crackers together for a fun and very circusy end to the party.

All in all, looks like everyone {including this little guy!} had a blast under the pint-sized top!

Many thanks to Janelle and the whole Diamond crew for giving us a peek at their festivities! Have a party you’d like to share? Send us an email!

All images courtesy of the Diamond Family. Photographs by Jen Dalton Limoges. 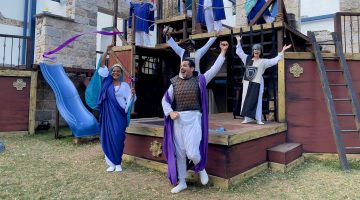