koodie picks: by the scoop

Our friend Eli, the Koodie (kid + foodie), is back with an exclusive snowball stand review for (cool) progeny. Check his previous reviews of The Cow in Reisterstown, Friendly Snowballs in Parkville, Prigel Family Creamery in Glen Arm and Walther Gardens Snowballs in Baltimore, too! You can catch more of Eli’s restaurant reviews on his blog, Adventures of a Koodie. Congrats to Eli for being named Best Up and Coming Food Blogger by Baltimore Magazine! 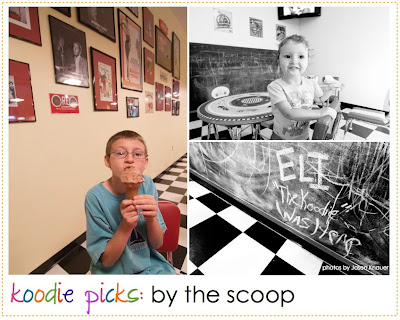 On Wednesday I went to a ice cream place called By The Scoop. When I got in, the first thing I saw was that it looked old fashioned. When I got to the front, I saw lots of flavors like Fudge Brownie, Cookie Monster, and Berger Cookie. Since all kids like ice cream, all the food there was kid friendly. I got an Ultimate Chocolate ice cream in a sugar cone. Before I got a chance to eat it I noticed three other things. The first one was that there was a TV showing an old TV show, my dad said it was “Leave it to Beaver”. The second was that there was a chalk board on the wall beside the television. The third was that there were children tables near the chalk board. But anyways, back to the ice cream. It was delicious! It was super chocolaty, very creamy, and tasted homemade! I loved every part of it. The best part was that there was a lot of it. The only problem was that there was no flavor to the sugar cone. Though my dad told me it was supposed to taste like that. I give ***** stars for food and ***** stars for kid friendly. Well, that’s all. Bye!

Next post monday's five things: beat the heat FOR FREE with tots in tow