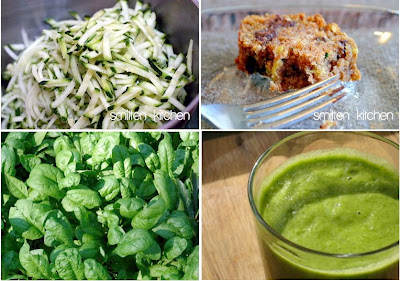 We’ve launched an all-out offensive at our house.

Come hell or high water, the Bug WILL eat something green. And I will not coerce her to do so, therefore jump starting some sort of food aversion complex.

But damned if I won’t hide it.

So for your culinary pleasure and personal sanity (should you be mounting a war much like my own), might I introduce two recipes that have gotten some of the green stuff into our Bug’s digestive track without inciting riot? Zucchini Bread and Green Monster Smoothies.

The zucchini bread recipe comes from Smitten Kitchen. I used walnuts and added an additional healthy handful of raisins. (The Bug is a raisin fiend). She munched on this for breakfast and for snack. {{Score one for the good guys.}} You can check out the recipe here.

The Green Monster Smoothie was a bit of a kitchen experiment. Bet ya didn’t know moms were scientists, too?

The Bug loves smoothies. I make them with frozen fruit instead of ice, which gives them a rich texture and a lot of flavor. Plus, it saves a bit of cash during the winter months if I buy frozen instead of fresh.

I was mixing up a peach and mango smoothie, when I decided to add a handful of spinach for kicks. Mostly to see if she’d tolerate. Not only did she tolerate, she ran around the kitchen yelling “YUM YUM YUM” and asking for more!

So, here it is. The Frankenstein of smoothies… Bug approved.

** you may need to add more water or juice, depending on the consistency you’d like the smoothie. 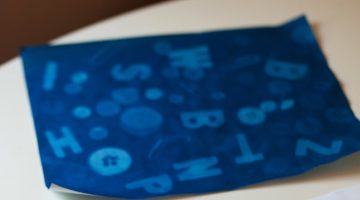