If You Ask A Mom to Go On A Business Trip…

If you ask a mom to go on a business trip, secretly she’ll be pretty excited. Yes, she’ll feel guilty but she’ll also daydream about a whole night’s rest, trashy tv and room service. (See, she forgot the conference she’s going to will keep her busy from 7 AM to midnight).

Then she’ll realize the trip isn’t one night – – it’s three. The guilt will creep up and tickle the back of her throat. Yes, she knows it’s good for everyone involved that she go. But it won’t stop the guilt.
So she’ll go to Target and the grocery store and make sure there are enough quick-cook nutritious meals and fun things to do in her absence that a little someone won’t even know she’s gone. She’ll also stockpile fruits and vegetables so no one gets scurvy. Because four days without veggies would inevitably cause irreparable development issues.
She’ll grab her planner and start begging, borrowing and calling in all favors from everyone she knows for childcare. Because while her mother might be kind enough to say she’ll cover the first two days, she also knows that’s not really reasonable to ask. So an aunt will fill in here, the nanny the last two days, her husband will have to leave early one day, a neighbor will take a late afternoon here, a friend two hours there, dinner with the great grandparents…
By the time all 96 hours are covered, her planner looks a bit like a writer’s four hundredth edit. Only a mensa genius would be able to follow the color coded pathways. And of course, six hours after her plane lands, something will happen and cause everything to shift. The childcare domino affect. But there isn’t much she can do from 700 miles away – – everyone will have to deal. And luckily, while she may be stressed out, she knows no one will let her 16 month old fend for herself.
Business conducted on the business trip keeps her spinning. The guilt trickles up, but is quickly squashed while the deals are made.
After 48 hours she’ll be ready to go home. But there is another 48 of meetings, talks, presentations, late night drinks (because that’s really where the deals are made) she’s not used to anymore, lunches and business dinners where she’ll try hard not to create an international incident or show more than one photo of the adorable cutie she left back in Charm City.
She’ll swear a little bit when the AirTran flight attendant tells her that her flight is grounded and they need to find another plane. Getting home before bedtime will be tight…
But she does it. And the enormous grin from the pj-clad toddler in the car seat at the airport arrivals lane makes coming home all the more sweeter. 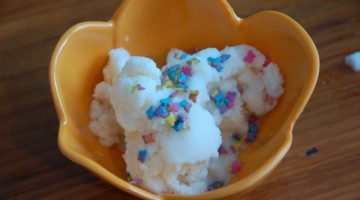