Party with Spot at Adventure Theatre (free tix anyone?) 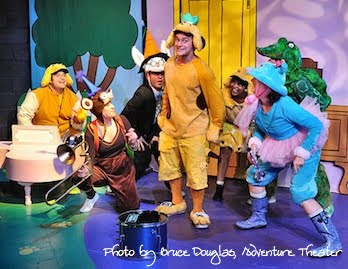 What do you get when you invite a crocodile, a hippopotamus, a monkey and a magician over to celebrate a dog’s birthday? One heckuva party – – and a fabulous family friendly theater experience.

Opening with a “Where’s Spot?” musical bit that incorporates the actors flipping stage doors just like my toddler flips the book flaps won me over. The cast had me at “Is he behind the red door?”

Lila was a fan even sooner. Pretty much as soon as Spot’s parents (the two “goggies”) appeared on stage and welcomed everyone. The show does a magical job of making the audience feel as if they are party guests, not passive viewers. It’s a rollicking hour-long performance where kids are encouraged to sing along (songs incorporate a lot of repetition), dance, help blow out birthday candles, guess what his presents are and play games right along with Spot and his friends. Even snag a goody bag as they leave the ‘party.’

The theater space itself is intimate and tiered, so the audience is right in on the action and part of the performance. There really ISN’T a bad seat in the house (far as we could tell). Lila loved having Spot and his friends interact with her as they came on and off stage, or danced in the aisles. Even at a mere 15 months, she clapped and twisted along with all of the other kidlets in the room! Be sure your kids have their dancing shoes on. Not only will they want to groove to the songs, there is a strategically placed game of freeze dance that happens with the audience right around the 45 minute mark… I’m sure it was an artistic decsision and had nothing to do with potentially antsy audience members who need to stretch…

One of the best things about Adventure Theatre? It’s designed for kids. No worries if your tot has a major meltdown because there isn’t a single other person in the room that wouldn’t understand. Good thing, too. Because people are probably going to see you hightail it for the lobby (there really isn’t an obscure exit route). We would highly discourage you from bringing a stroller if you can avoid it.

The theater staff is especially attuned to the sensitivities of differently-abled children, and offer specially-designed performances for hearing impaired and those with autistic spectrum disorder. These performances typically omit the use of strobe lighting or loud noises and keep the house lights on, among other considerations. The ASL & Autism friendly performance for this show takes place on October 31st at 2:00 PM. Don’t forget to dress up!

Guess what? We’ve got a family four pack of tickets to Spot’s Birthday Party that we’re giving away (a $60 value!)! You can use them for ANY performance of the show, which runs until November 2nd. Shows are held every Saturday and Sunday at 11am and 2pm, with a few 4:30 performances. Weekday shows are available on a varied schedule.

Disclaimer: Adventure Theater was kind enough to let us attend their show free of charge, and to donate a family four pack of tickets for a lucky (cool) progeny reader! Because they want to be sure to get the word out about their fantastic production (and of course, we want to help!), they also paid for one month of blog sponsorship. However, out of fairness to our readers, none of the above influenced our comments. We couldn’t recommend any product or service to you – – our fabulous followers – – unless we can endorse whole-heartedly. The opinions in this post are entirely those of (cool) progeny.

Next post Congrats Mary Margaret! Selected as one of the 2010 Discovery Girl Role Models!