Have you met the 27 Little Characters who are featured as part of Wee Chic’s 2010 fall ad campaign? Well, allow us to introduce you! These little cuties shared everything from their favorite foods and colors to their favorite photo shoot moments. The characters were selected from a local open casting call last spring.

Meet them in person tomorrow night! Join Wee Chic – A Baby Boutique and the 2010 Little Characters for a night of FUN at Green Spring Station! Catch an exclusive unplugged set with Lisa and Mikel of Milkshake, shop for a cause at Wee Chic (10% of all sales benefit The Face Forward Initiative), and munch on some scrumptious goodies from local favs MB Sweets, Stone Mill Bakery and The Nut Farm and Creamery.

Sponsored by Baltimore Style Magazine and Baltimore Jewish Times, the party kicks off at 5:30 PM on Thursday, September 23rd. The action will be taking place inside Wee Chic and in the Green Spring Station courtyard.

The Bug, Pat and I will be there – – and yes, she’ll be rockin’ a tutu just like Milkshake’s Lisa! So be sure to wear your tutu finest, too!

And now… the drum roll please… here are the 2010 Little Characters in no particular order!

Sienna: This energetic 20-month Baltimore cutie shares her middle name with a certain famous first daughter. A budding fashionista (her mom says she don’t have a ‘go to’ outfit because there are just too many options in the closet!) spends her days redecorating houses and making other people smile. You may just find her and her mom humming “We Did It!” from Dora, The Explorer.

Allison: 4-year-old Allison loves dogs. She better – – her family has three of them: Jack, Teddy and Lily! The Owings Mills native describers herself as pretty, funny and fast. Her favorite part about being selected as a little character? Taking pictures.

Ben: Ben might just be a model in the making. The 6 year-old West Towson Elementary school student loved getting dressed up for the little character’s photo shoot. Seems he has a thing for toothy grins and good grooming: his favorite animal is a lion because they have sharp teeth and a cool mane.

Sutton: Sutton’s lucky number is 9: she was born on 9/9/09! This recent birthday girl is another Baltimore babe and mac-n-cheese aficionado. If she’s home, chances are she’s following her pet Boxer, Porter, around the house or reading Itsy Bitsy Spider. Over, and over, again.

Tyler: The 3-year-old tike from Frederick loves chocolate milk – – because it’s “good for his tummy.” His hero? Big sis, Ella. (Who’s only “bigger” by about 18 months!) We asked him what advice he’d give his mom and dad, and he told us “There WAS a monster in the dark, really…”

Madison: Another birthday girl! This lovable Perry Hall native turned 2 last week! Seems like Madison might be 2 going on 16, as her parents get a kick out of listening in to the “conversations” she has on her toy cell phone. Older brother Dylan keeps this little character laughing with lots of silliness – – and her mom says that laugh is absolutely priceless.

Grace: Grace loves strawberry strudel for breakfast and her favorite color is purple. The Timonium-area three-year-old could read Goodnight Moon over and over again – – and wants her parents to know that chocolate ice cream is a GREAT source of dairy. It should be eaten at every meal!

Serenity: 4-year -old Serenity is a little girl who knows what she likes. Her favorite article of clothing? A purple and black “box” (plaid) skirt. If she could travel anywhere in the world, she’d head straight to the Mickey Mouse’s house. The Dundalk native loves going to “big girl school,” soccer, dance and playing with big sis Taylor and big brother Ryan.

Alexa: Alexa is a three-year-old cheese lover. It must run in the family – – because parents Anthony and Heidi are huge cheese devotees, too! This Baltimore loves the color pink and anything book she can get her hands on. Doesn’t matter if she’s flipping through the illustrations or being read to. She’s just a little book worm!

Jillian: Five Little Monkeys Jumping on the Bed is the favorite book of this 2-and-a-half year old Baltimore cutie. Jillian can’t get enough mac ‘n cheese because it’s ‘yummy in [her] tummy’ and has a Welsh Terrier named Wynnie at home.

Maddie: 5-year-old Maddie doesn’t have a pet, but has been wishing for a guinea pig named Ellie. Her first word was “mama” and her second word was “ball” – – which makes this Owings Mill native crack up. Although she may be hoping for a guinea pig, her favorite animals are bunnies because they’re so cute and fluffy. How does she describe herself? Friendly, caring and funny.

Gabriella: Just say the word “tickalee” and this adorable 27-month-old erupts in laughter! The Baltimore girl said the best part about being selected as a little character was “standing,” and she starts every day with yogurt. Mom Delese describes Gabriella as sweet, smart and loving.

Caleb: This 1-year-old determined cutie is ALL BOY. Mom Traci says that the best part of having Caleb selected as a little character was that “it’s special to feel special and to be chosen from a group of such beautiful faces. It was just so exciting.” The funniest thing this character does? He kisses in a straight-on, full mouth-open way. 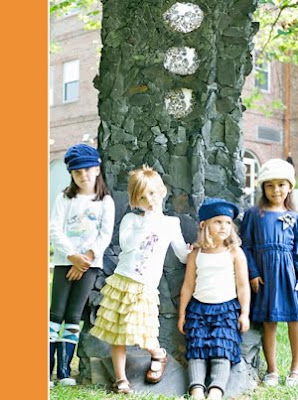 Alyssa: Smart. Gorgeous. Polite. Those are the three words Alyssa uses to describe herself! The 4-year-old Baltimore girl loved being selected as a little character because she got to take pretty pictures, and has a particular affinity for butterflies. Apparen
tly, she has a German Shepherd at home that snores like Mimi – – and that it makes her laugh! We don’t know who Mimi is, but the image makes us laugh, too!

Clare: This little character is a “nanas” lover. (In case you don’t speak toddler, that’s bananas!) The 21-month-old Bel Air native has a pet Tabby cat named Bristol and a pet Border Collie mix named Trout. Mom Nancy describes her as funny, happy and pretty — but we think she’s pretty darn polite, too. Apparently Clare will say “choo” after anyone sneezes, even in they are in a different room!

Molly: 13-month-old Molly loves to be followed around the house. She turns to make sure you’re following her and lets out the most precious belly laugh! That giggle is infectious, according to mom Jodi. Jodi describes her little character as beautiful, happy and flirtatious — and Jodi is one proud Mama. She says the best thing about having Molly selected as a little character was seeing her shine in front of the camera and showing off her photo in Baltimore Style Magazine.

Colin: Colin is almost eight-months-old and an enthusiast of all things mashed, especially sweet potatoes, yogurt and anything fruit. His days are full of playing, long walks, watching swimming turtles, napping, and baths. The Baltimore character wakes up each day to his parents Brad and Stephanie singing “Good Morning to You.” Stephanie adds that she loved seeing Colin light up on a camera – – and supporting a fabulous local business like Wee Chic.

Jonathan: Jonathan can tell you just what ingredients make his perfect sandwich: bread, ham, cheese, mustard AND mayonnaise. This four-year old’s favorite color is green and he just adores his toy truck. Bet you didn’t know he could fit six other cars in it! Speaking of cars, the Edgewood native’s favorite book AND movie are both Cars. He especially likes when Lightning McQueen falls out of his trailer. Although Jonathan is a big brother, his younger sister Noelle is more like a friend. A best friend. They do EVERYTHING together. 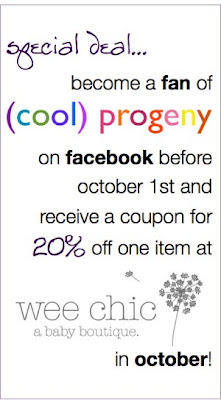 Quinn: Parlez-vous français? 5-year-old Quinn does! In fact, french class is his favorite thing to do at school. Quinn has a lot to be excited about lately. He has a brand new baby sister – – so now he’s a big brother to two younger sisters. His favorite thing about being a big brother? Taking care of everyone. The Superhero Squad expert (he likes them all but Wolverine is his favorite) comes from Cockeysville and can’t get enough mac ‘n cheese from the blue box. And he LOVES making sandcastles and digging huge holes at the beach!

Charlie: Charlie is a book worm. Literally. This 16-month-old loves to sit in his car seat and read book after book after book! The Baltimore charmer likes going for walks around his neighborhood to see the duckies, dancing up a storm and checking the outside gate to make sure it’s still working properly… You’ll probably find Charlie in cargo pants and a polo shirt, just like his Daddy. You might find his Mom, Laura, humming Elmo’s Song (one of his favorites). Laura says she loves that Charlie is such a sweet , sensitive and thoughtful soul!

Jaeden: 19-month-old Jaeden is a really lucky boy. He has two ‘best guys’ to play with every day — his Grandpa and his cousin! The Baltimore little character likes to be silly and is quite the adventurous tike. On any given day, you might just find Jaeden and his mom singing “You and Me Together” from Oliver and Company. And he’ll probably be wearing shorts and a tee because it makes him look like a ‘big boy.’

Delaney: Delaney is the little character that traveled the farthest for the little characters Photo Shoot – – all the way from Centreville, Virginia! The three-and-a-half-year-old fashionista loves dressing up in her green and white polka dot dress with the halter strap and going to the office with Mommy. Her favorite thing about being selected as a little character? Twirling in front of the camera.

Aiden: 23-month-old Aiden is used to hamming it up for the camera. Mom Krista is a photographer! But she enjoyed having someone else chase Aiden around during the Little Characters photo shoot. This adorable cutie loves PB&J and apparently moves just like Michael Jackson when he dances to Irish music. Did the King of Pop ever wear a kilt?

Next post And the winner of the JLB Boutique Warehouse Sale Giveaway is...

Previous Article Junior League gives us the 411 on this Weekend's Boutique Warehouse Sale!