An (art)musing romp through creative genius: Walter Wick at The Walters Museum 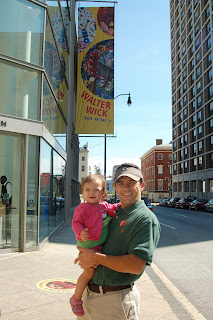 Walter Wick, famed photographer and co-creative force behind the popular “I Spy” book series, was stuck. In the middle of developing his seventh book, Can You See What I See? On a Scary Scary Night, he was having trouble envisioning who would inhabit the Scary Scary Castle he had built.

He found his inspiration right here in Charm City – – at one of our local treasures, The Walters Art Museum.

After a trek through the museum’s Chamber of Wonders, Wick just knew the lord of his castle would be a collector of curiosities. Heads of animals. Tortoise shells. Suits of Armor. A spiral staircase. The Scary Scary Castle would be full of natural, scientific and fun oddities – – just like the Walters’ exhibit. 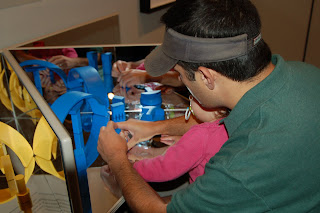 “It’s something the museum is really proud of,” say Jacqueline Copeland (Jackie), director of education and public programs at the museum. “Old objects like our collections can still inspire contemporary artists.”

You can see the Scary Scary Castle and other Wick creations at the Walters now through January 2, 2011. “Walter Wick: Gizmos, Gadgets and Toys in the Attic” is an amusing romp through Wick’s artistic and scientific genius that will spark your innate childhood inquisitiveness. 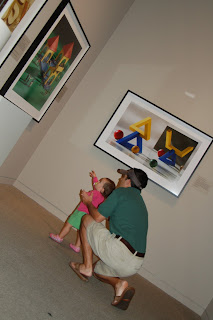 Oh yeah, your kids will love it, too.

Illusions. Mirrors. Photography. Science. Treasure Ships. Scary Castles. Fairy tales. Stroll through images of Wick’s works and some of his beloved miniature scenes. Play with the blocks in the hands-on illusion activity. Page through some of Wick’s books, and take the Museum’s scavenger hunt. Can YOU spy all of the items?

The Lila Bug was particularly enthralled with his vision of Puss ‘n Boots model (she has a bit of a “kitty” fetish right now…).

At the center of each one of Wick’s pieces is the gee whiz factor: how did he DO that? It’s a great conversation starter with your kids. Take the Imagined World photograph for example. Looking at the image, it seems as is if all of the objects have been thrown up in the air. When asked “how’d he do that?”, several school children offered plausible explanations in letters to Wick: he threw things up in the air and snapped the photo at precisely the right moment? Gelatin? The objects were suspended in plastic. Or maybe he went up into Outer Space and the objects were weightless so he could photograph them? 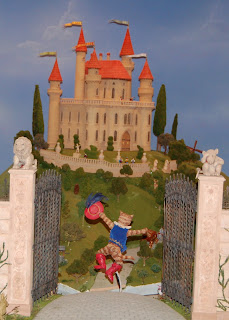 “The beauty of [Wick’s] work is that kids are thinking about how things work,” said Jackie.

You and your child will delight in this puzzling artventure, intentionally designed for those with inquisitive minds. Who asks more questions that your child?

Be sure to linger at The Balancing Act, which is Jackie’s favorite part of the exhibition. 117 toys and objects balanced on a single lego block. Apparently it took Wick about a week to get this to work – – no glue or attaching. Amazing. 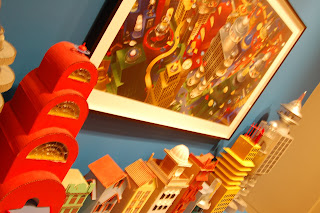 Although admission to the Walters Museum is free, this is a ticketed exhibition. 17 and under are free, but adults pay $10 each (free for members). Well worth the price! While you’re there, be sure to visit the Family Art Studio and Play area. Make believe, a wooden castle and plenty of art activities. Let your child’s creativity out to play! During the month of October, museum-sponsored family art activities include creating mysterious mazes, picture games and tricky collages. (NOTE: Bringing a stroller? Be SURE to take the elevator to the family area. There are a lot of steps…).

Bring a little extra green to pick up some of Wick’s books in the exhibit shop and continue honing your child’s powers of observation and inquiry at home. (We bought three of them…)

(cool) tip: Want to see the exhibit for FREE? Join the Walter’s Art Museum for their Walter Wick Family Festival on Saturday, October 23! No exhibition tickets required and lots of fun activities are being planned for all ages. Performers will dazzle with feats of fantasy, and artist and author Walter Wick will say hello and sign his books. Art created by local K-12 students and MICA students will be on display as well.

Next post Did you win the Famly Four Pack of Tix to Party in the Park?

Previous Article Ever wonder what your child is dreaming about? 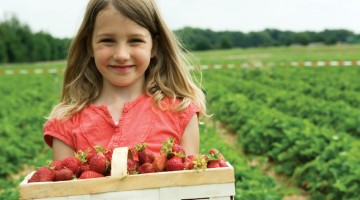