Two Bikes and a Tike 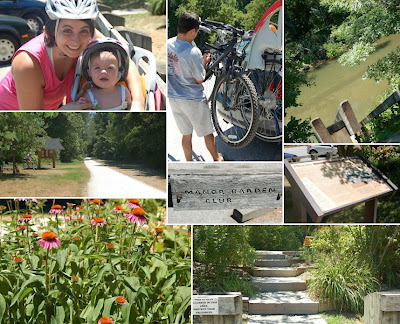 The smell of sausage and eggs lingered in the air. It was one of those perfect, rare weekend mornings where we didn’t have anywhere we had to be or anything we had to do. A whole morning to do anything we wanted. So we decided to beat the impending heatwave and try out the co-pilot bike seat we had gotten for Christmas – FINALLY. It was 8:00 a.m. and 70 degrees. We were all actually pretty pumped about our rolling adventure to the Northern Central Railroad (NCR) Trail.

Pat retrieved the unopened box from the basement. It promised an easy install. Claimed the seat came fully assembled and would take 30 seconds to securely fasten the Co-Pilot Limo to the bike after the rack was attached.
While he set to work on the seat install, I grabbed our two bikes from the basement. Four practically flat tires. Not completely unexpected since the last time we had used them I wasn’t even a little bit pregnant and Lila just turned one… but an unexpected twist nonetheless. Add time to stop at gas station and pump up tires to the schedule. No big deal. We’d be on the trail by 9:30 at the latest and home before lunch.
Three hours and one nap later, the seat was attached.
No, it wasn’t false advertising. The seat only took 30 seconds to clip on. What the box failed to mention the three hours it would take to figure out how to install the rack – – which included a customer service phone call to LL Bean and the realization that the seat didn’t work with Pat’s bike so it had to go on mine. May have involved some swearing, too. My husband can string together ingenious profane poetry when provoked.
Close to lunchtime. Made three PB&J sandwiches, packed some grapes, water, 2 Motts for Tots (LOVE these handy pre-dilutred juice boxes made from 100% juice and distilled water), and some snackable items into a backpack. Never you mind the heatwave, I was seeing perfectly contrived Hollywood movie scenes of families picnicking in the park. Ran upstairs to grab the Bug’s sunscreen. Came down the stairs to a trail of plastic ziploc bag and two sheepishly grinning dogs. One PB&J sandwich down. And no more bread. Fabulous. Then I remembered my cousin mentioning she noticed I only eat half of anything anymore because the Bug eats the other half. Crisis averted.
11:30 AM and 87 degrees. Pat attaches the bike rack on the Jetta. Only takes 15 minutes. Not bad. The Bug, Pat, our picnic backpack, three bike helmets and I pile into the car, heading north.
D&*$. Need to stop and pump up the tires.
12:15 PM. We have arrived at the Phoenix trail entrance of the NCR Trail. The thermometer said 95 degrees. Ugh. (Seriously, there is no other word for it).
But after four hours of getting ready, we simply couldn’t abandon ship now. Besides, the trail is mostly shaded and there was a breeze. Yes, we convinced ourselves that this would not be a venture into the first circle of hell. It would be fun.
We lathered on the sunscreen, strapped on the helmets, hopped on the bikes and got .75 miles before stopping for lunch. The Bug wasn’t really thrilled with the whole strapped-to-a-bike situation with an egg-shaped hard hat thing at first. Let out a scream so blood curdling that it shattered my Hollywood movie illusion.
She did, however, love eating goldfish on the picnic bench. Some fantasy redemption.
Satiated, Lila settled into her co-Pilot and we went on our merry way by the Sparks Nature Center, rounding Glencoe Road. While we were gliding along just fine, something just didn’t feel right. Every time I hit a slight bump in the road, it felt like my back tire was slamming into a log. Looked down – – yepp, tire was seriously low. Momentary panic. Nothing to do but turn around and pray the tire would hold. Prayed to every higher being I could think of – – religious affiliation was a non-issue.
We made it!
Four hours of prep. One hour of picnic/bike riding in the heat. Six miles of trail covered. One toddler meltdown. A beautifully comprised string of swear words that would make your grandma blush, courtesy of my talented husband. A shared PB&J sandwich. A temperature so hot you didn’t sweat until you felt the relief from the car air conditioner on your skin.
In spite of it all, we had a good time. We’re looking forward to a return trip to the NCR trail and will properly review it next time. Too wrapped up in surviving all of the little curve balls.
But I promise you – – our next bikeventure will take place well before noon. And the tires will be pumped up and checked the night before.

Previous Article A Vist to the House of the Babe!!

Where To Play: Baltimore Family Events This Weekend, September 15-17