A Vist to the House of the Babe!! 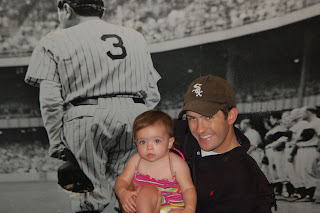 Growing up in Chicago, I’ve had sports fever since I was very little. My love for Chicago Sports teams (except for those lowly and helpless Cubs) is well known. As Lila’s father, I have taken it upon myself to introduce her to Sports Center and every kind of sports event possible: the Masters, Game 4 of the Stanley Cup Finals, you name it. Surprisingly she seems to like to watch baseball. While the attraction may be all of the colors and the movement of people on TV, it’s still fun to sit there and talk to her about the different plays.

Father’s Day weekend my parents and one of my three fabulous sisters were visiting from Chicago. My Dad wanted to celebrate Father’s Day with a visit to the Babe Ruth Museum. What a great opportunity to continue Lila’s sports education!

I decided to plan a nice brunch and a visit to the museum (hoping a nice brunch might entice those in our party who may not have been so thrilled for a baseball history lesson). We spent the first part of our morning at Gertrude’s – – and I’ll chat about why we think Gertrude’s is a GREAT kid-friendly brunch another day. (Yeah, I know what you’re thinking – – white linen, lots of stemware and kids usually don’t mesh – – but I’m going to prove you wrong!).

The Babe Ruth Museum is run in conjunction with the Sports Legends Museum. The Sports Legends Museum is located just to the north of Camden Yards. The Babe Ruth Museum and Birth Place is actually three blocks away from there. All you have to do is buy your ticket and follow the 60 baseballs (the Babe had 60 home runs in one season before Sammy Sosa and Mark McGuire’s steroid summer)to the small row home where the Babe was born.

The quaint house is tucked away on a little side street just east of Greene Street – – and is just as small as you would imagine. It’s not really stroller accessible. We had to lift the stroller up in order to bring it inside the building and then had to leave it on the first floor in order to see what was on the second. The building is due for a huge renovation that will include a stroller-friendly entrance ramp and elevator, but the museum has only raised about half of the funds necessary for the $2 million renovation according to the guide we chatted with. Hopefully the fundraising efforts will be completed soon and the building will be much more stroller friendly.

As for diaper changing… yeah. We squashed the stroller into the first floor unisex restroom in order to change the Bug. Yeah, that was as adventurous as it sounds. Maybe the renovations will include a changing station, too?

When you walk inside the building, you immediately see a big gift shop that any Yankee fan would love. Being a Yankee hater, I just walked right past into the museum and began to go through the exhibit. (If you still have your stroller you can stick it under the stairs where it is out of the way while you visit the museum). As part of the main exhibit room, you can have your picture taken next to a life size picture with the Babe.

The museum does a great job of telling you about the Babe’s birth and childhood, and even show you the footage of his “called shot” in the 1932 World Series against the lowly and helpless Cubs at Wrigley Field. (Coincidentally, just a small piece of baseball history, the Babe modeled his swing after the great and somewhat under appreciated “Shoeless” Joe Jackson of the scandalous Black Sox team of 1919). As you move throughout the building, you can’t helped but get caught up in the history of his life and how he was such a freak athlete and a very large one at that. You’ll find one of his jerseys on display in the back exhibit room – – I think you could fit me into it probably three time over and there would still be room for another person. If you have a young baseball aficionado or history buff in the family, you can’t go wrong with a trip to this iconic Baltimore landmark.

Lila just being 1 year old watched the video of his “called shot” got to take a picture with the Babe and then went on to have my favorite lunch in the world: a Potbelly Sandwich and of course a chocolate milkshake (just around the corner from the Museum). Our trip to the museum was great and a wonderful way to spend a beautiful Father’s Day with our family. 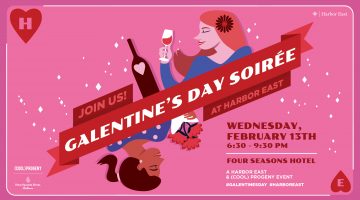 Grab Your Gal Pals! Join Us for the Galentine’s Day Soirée at Four Seasons Baltimore