parents in the know: Evan Serpick 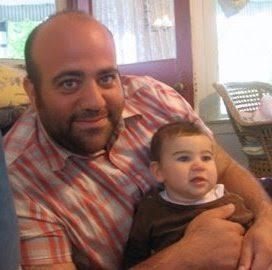 Have you checked out Learning to Crawl, the frank and funny parenting blog written by Evan Serpick, senior editor at Baltimore Magazine? It’s a frequent read for us – – and a recent post on parenting pet peeves had us splurting our coffee.

Dad to three-and-a-half year old Jack and 19-month-old Benny, Evan was kind enough to give us the inside track on some of his favorite Baltimore-area spots, and how he and his wife, Brenda Bordofsky-Serpick (high school teacher and poet), keep their household spinning.

How did you end up as sr. editor for Baltimore magazine?

I worked in New York as a magazine writer and editor for a number of years, most recently as associate editor at Rolling Stone. I really enjoyed the high-profile work, but after we had Jack, I really didn’t like working late all the time and traveling as much as I did. Brenda, who is from L.A., really fell in love with Baltimore during our visits down here to see family, so we starting thinking about finding a way to move down here. I contacted Max Weiss, who was then senior editor of Baltimore Magazine to see if there might be an opening down the line and it was really fortuitous timing: She had just been promoted to managing editor and was looking for a senior editor to replace her. It seemed like it was meant to be, so we jumped.

How do you balance being a dad with being a professional?

I have to say, my work schedule these days is much more amenable to being an active, involved dad. Since Baltimore Mag is a monthly, there are rarely late nights. And since I often cover family-related events, both for the Learning to Crawl blog and often for my column, Charm City Chatter, in the magazine, there are a lot of opportunities to merge family time and work time.

If it’s my turn to get up with the boys, I go get whoever wakes up first and take them downstairs for breakfast. If it’s Brenda’s turn, I wake up about a half hour or an hour later and go down to see everybody, grab a cup of coffee, and either play a game (this morning it was Chutes and Ladders) or catch up on Sid the Science Kid. Before I go to bed, I usually manage to read a paragraph of a book I’ll never finish or one clue from the NYTimes crossword puzzle.

If you had an entire day to do anything with your two sons, what would you do?

Clemetine on Harford Rd. is great because it has a play area, but we love Paper Moon Diner for all the cool stuff to look at and play with.

What do you consider to be Maryland’s best-kept “kid-friendly” secret?

I’ve been mentioning it so much, it’s probably not a secret anymore, but the 1/8th size replica trains in Leakin Park are a kid’s (and parent’s) dream. Once a month, on the second Sunday of the month, a group of train enthusiasts takes kids and parents for rides on 3 miles of mini-tracks for free. SO fun.

Favorite ice cream flavor and best place to get it?

Cookies and cream or oreo. Anything with chunks. We like Taharka Brothers at the Mt. Washington Mill (formerly called Sylvan Beach).

What’s the best thing about your job?

Compared to previous jobs at Rolling Stone and Entertainment Weekly, I’m able to cover a much wider range of interesting stories, everything from profiling a homeless blogger to unraveling the mystery of an overdosing U of M PhD candidate to exploring the phenomenon of black families adopting white children.

How do you and your spouse balance parenting responsibilities?

I guess it’s become second nature. We pretty much divide responsibilities 50-50. If she’s going through a rough time, I’ll do a little more, and vice-versa.

What’s the funniest thing your child has ever said to you?

Oh, there are so many. A couple of my favorites have come when Jack is lying in bed, calling to us becase he doesn’t want to go to sleep. One time – one of the first times this happened – he yelled “Daddy!” at ever-increasing volumes for about 10 minutes, then added “It’s me! Jack!” in case there was any confusion. Now, he’s a little sharper and if we’ve told him we’re not coming back in, he’ll yell “Mommy!” and “Daddy!” for a while, then throw in “I know you can hear me!” He’s also learned that whenever we spell something out, it’s something he wants. So if I say to Brenda, “Should we get P-I-Z-Z-A tonight?” Jack will immediately say “I want P-I-Z-Z-A!” even though he doesn’t know what it is…

We subscribe to Centerstage and love going to the shows there or at the Single Carrot Theater, though it’s always a struggle to stay awake. We also like the Owl Bar and Club Charles.

Best thing about being a dad?

I’d have to say the hugs. There’s nothing like coming home from work or anywhere else and having two adorable little people running toward you with giant smiles on their faces, shouting “Daddy!” with arms wide open. That’s what I imagine heaven would be like.

If a movie was made about your life, what would be the lead song on the soundtrack?

Oh jeez, that’s tough. Maybe the Beatles, “All You Need is Love.” I’m a big believer in that. But I’d love my soundtrack to have more of a reggae feel. Maybe Bob Marley, “One Love.” That works too.

Thanks, Evan, for being this week’s parent in the know
! Be sure to check out Learning to Crawl and become a Facebook fan, too!

where to play: baltimore family fun this weekend