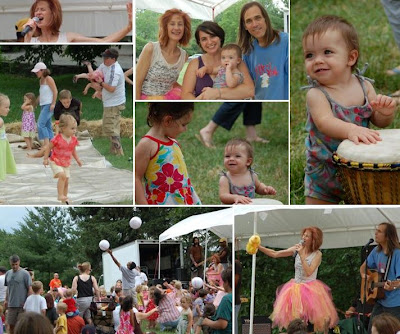 There was really great music.

No, it wasn’t the reincarnation of Woodstock on Sunday afternoon in Lauraville. It was the inaugural KidStock.

It looked like Woodstock (or what I imagine Woodstock to have looked like). Bare feet. Picnic blankets. Tree hugging (literally – -it was raining, remember?). Dancing in the rain. Lots of smiles and singing. Some on tune, some off tune. And no one cared because everyone was having fun.

If you didn’t have a chance to make it to KidStock 2010, you missed a frothy sing-a-long with Milkshake, guitar designing with the Walters Art Museum, playground hopping, samba drumming, a ginormous (yes, Merriam-Webster says it’s a word!) slip ‘n slide, and roaring with Little Maestros! This laid back, family-jiving, music-filled and kid-inspired afternoon had everybody rocking – – didn’t matter if you were six months, six years or six decades old.

Sponsored by the Neighborhoods of Greater Lauraville and Baltimore’s Child on the grounds of Garrett Heights Elementary School, KidStock was an afternoon-long festival of arts, crafts, kid activities, playing and music, music, music. They had two stages going all afternoon with great local acts, and several organizations offering activities for the pint-sized crowd on the concert area perimeter. We only had a chance to catch two of the shows: Milkshake (the festival headliner), and Little Maestros. Both were fantastic, in spite of weather-related technical difficulties. Lila bopped the whole time – – and neither Pat nor I got that nauseated feeling we sometimes get after too much Wiggles exposure… The verdict? Great kid music that’s adult-friendly!

Lila got to meet Lisa and Mikel from grammy-nominated Milkshake, too. Despite the rain pounding so hard it propelled off the ground, exposed equipment needing to be loaded and that they had just signed about seven billion autographs, they were still kind enough to invite us up on stage for a photo op. Stay tuned for an interview with Lisa and Mikel next week!

We’ve been Milkshake fans for quite some time, but were new to the Little Maestros. Apparently, they are part of a franchised kid-class/performance organization and are based out of Rockville. Kudos to Emily, Justin, Mike and Autumn for not missing a beat when the electric went out. They simply switched to acoustic to sing the Dinosaur song. A big hit with our Bug.

While the rain may have kept the crowd down a bit, we found it refreshing. No rotisserie skin here… And it kept the very-popular slip ‘n slide super slick.

Local Harford Road restaurants served up some healthy food lunch options. We didn’t have a chance to sample, but lots of others were chowing down on chicken salad and turkey sandwiches with a side of fruit. Lemonade was the drink of choice… and although it was a bit bland for Pat’s standards, Lila loved it.

Our only suggestion for future KidStocks (and we HOPE there will be future events!), would be better signage. It was tough to tell which booths were offering which activities… and a poster/booth with event and schedule info would have been great. (Our apologies if it was there and we just missed it!).

Thanks for showing us a great time, Lauraville! Can’t wait to come back! 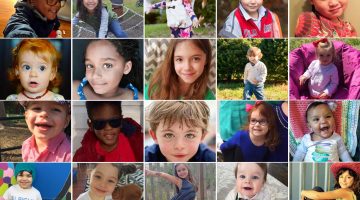