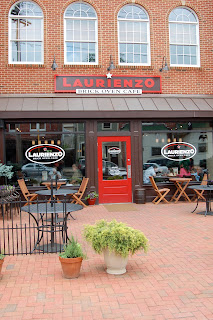 Early Sunday afternoon,we were near Mt. Airy on a trek back from Frederick. All three of us were starving and the little voice from the back seat was starting to escalate. So we took the nearest exit, drove down Main Street in Mt. Airy and found a variety of great options that looked Lila-friendly. We ended up at a chic looking pizza joint, Laurienzo Brick Oven Cafe. Thin-crust pizza, the All-American friendly toddler food, seemed to be a good bargaining option: we had a prayer of getting some veggies into the Bug and she could experiment with tomato sauce as finger paints.

The service was beyond friendly and there was a fairly good-sized “family” crowd. We were immediately seated with a restaurant-grade high chair (perfect for slipping under the table so the bug felt like she was eating ‘with us’). We ordered a 12-inch tomato and basil pizza, two drinks and settled into a game of “who wants a cheerio?” while we waited for lunch.

The pizza was a gooey delight. Super thin crust, lots of cheese and a sauce that rivaled some of the best either of us had while studying in Italy a few years ago. The Bug ate it without complaint, a pretty great sign. The pies only come in one size, but 12″ was plenty for the three of us. We even brought three slices home.

Lila started getting antsy after the meal, so we opted out of dessert (although the menu was pretty tempting!). Has anyone else tried the food at Laurienzo’s? What did you think?

Although the food was delicious and the service was great, there were a few downsides to dining at Laurienzo. The first issue? Acoustics. Despite a pretty good-sized lunch crowd, Lila’s screeches (she only has one volume right now – – LOUD!) echoed in the cavernous space. That intimidated us a bit and made us more likely to leave sooner; we didn’t want a few squawks to interrupt other diners.

Another issue? No changing table in the bathroom. Now, each bathroom was a single room and handicapped accessible, so in a pinch you have plenty of space to throw down a changing pad on the floor. I wouldn’t describe myself as a raging germaphobe, but we still opted to change Lila in the car. (I had seen an ABC news story about the bathroom floor being more germy than a toilet…).

On the plus side, a stroller could easily fit through the aisles in the restaurant. Easy exit route if your little one is having an off-day. They also have an al fresco dining option (which we always prefer – – but it was of course, raining).

So if you’re shopping on Main Street or in the Mt. Airy area, we would definitely suggest grabing a drink and a meal at Laurienzo. They boasted having some of the best Bloody Marylands, Mojitos and White Sangria around. I must admit, my mojito was delicious.

Previous Article Feed the Giraffes at the Maryland Zoo 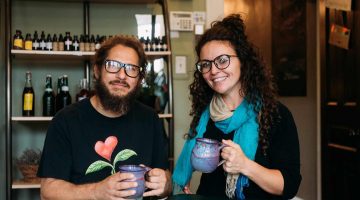 Coffee With: Jes and Spilly of Plant Medicine Workshop